Episode Five: recovering our losses, and a train trip to the roof of the Andes

Following up the fourth episode in our Galapagos story, 1969:

After breakfast, we called an urgent meeting.   We wanted all the money refunded that we’d paid for the voyage.  ‘Believe it was $450 US per person. (In today’s dollars, that’s just over $3,000.)  And, we asked the money all be in small notes.

Mission impossible?  First thing, we had to find out who owned the ‘Cristobal Carrier’, or the ship’s agents.

In the meanwhile, both local newspapers had printed a tearjerker of story, “It was a foggy night, and I could not see a hand in front of me”; the Captain was quoted as saying.

Foggy? The stars were sparkling in a clear night sky.  And when I got up to the bridge, there was no one there. Furthermore there were two small lighthouses at each end of the island.

So I called the media.  Two reporters, one from each of the two local newspapers, showed up at the Humboldt Hotel.  We told them the real story.  They printed it. (We still have the articles.)

Now, mission $$$.  I called the various consulates and embassies (American, Canadian, Swiss, German, etc.) but it was Monday and their offices were all closed.

It turned out the ship was registered under various names and we had a heck of a time trying to find the party responsible and who could authorize the refunds, in US dollars.

By now, nobody believed the Captain and second mate any longer.  The print media were on our side, so was the radio.

Cornered and nowhere to turn, the owner’s representative arranged for the local bank to fork over all of our money – mostly in five dollar bills as we’d requested.  I had bought a large leather shoulder bag, and stacked it full of the refunded dollars. In triumph and with a big smile, I returned to the Hotel.

It was now Thursday.  Each and every one received their ship fare back. Now, what to do with all our extra time? People had return flights home but not for awhile.

I had noticed a sign somewhere that the “Da Vinci”, an Italian passenger ship, would be in port the next day en route to Gallao, Peru.  I found the ship’s agent who told me there was room for only six passengers.

So six of us sailed aboard “Da Vinci” and the rest went by bus. We would meet in Lima, Peru, actually Cuzco, since the plan was to go from Cuzco to Machu Picchu. From Lima we took the train up to the final stop very high up in the Andes – Huancao, I believe.

This train ride was something else! (See my blog post for more details about this train trip.)  At least three dozen times we shunted back and forth in order to gain the higher altitudes.  A superb feat of engineering.  Later I was reminded of this train trip when we boarded the “toy train” en route to Darjeeling in India, same principle. 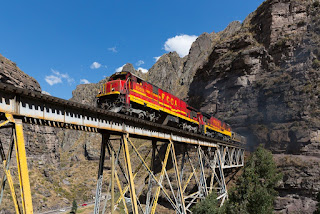 The train was called “El Tren del Sol” because two hours of out Lima, we were over the clouds into a sunny blue sky and clear air. Because of the altitude the train carried oxygen tanks.

From the train station we took a bus to Cuzco with its amazing walls built of huge boulders fitted perfectly together – still a mystery today how this was achieved. 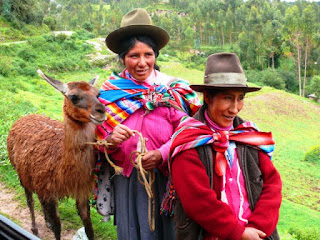 After visiting Cuzco and Oleobamba, we took another train to Macchu Picchu.  A new world, another era.   (This was 1969, long before the site became the heavily-visited tourist destination it is now.)

After Macchu Picchu we all separated.  Most returned by train to Lima then connected back home by air.  Myself, I went by train to Puno (Lake Titicaca) to cross the highest navigable lake in the world aboard “Oleanta”, to Bolivia. Here is a link to my blog post about the crossing.

Thus ended what turned out to be an extraordinary journey supposedly to the Galapagos but instead took us to Cuzco and Macchu Picchu, thanks to the shipwreck of the iconic vessel ‘Cristobal Carrier’.

thanks for the memories-Steve Palmer