Ogden Point breakwater, visible from our apartment and a five minute walk, has many visitors.  During the Alaska cruise season, mega ships dock there. Waters are deep and the tides and wind churn up food for big fish like salmon, which in turn attract local fishermen (mostly weekenders) in their small motor boats. The breakwater is also a walking path used by locals and visitors alike. 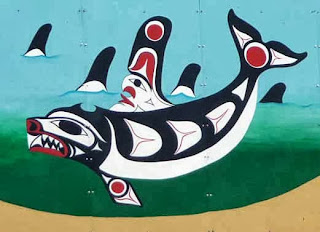 Recently a colourful, symbolic mural was created by local First Nations.  One segment of the mural is devoted to the Whale and the Orca. We separate the two, because there’s a misnomer in English, calling Orcas “killer whales”. 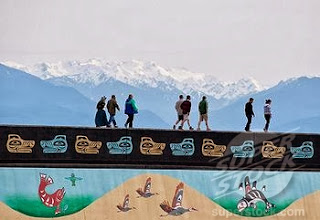 They’re not Whales; Orcas belong to the Dolphin family. A tourism company called the “Prince of Whales” (among others) brings members of the human family to the waters where these two species can be spotted in the Salish Sea and in Juan de Fuca Strait. 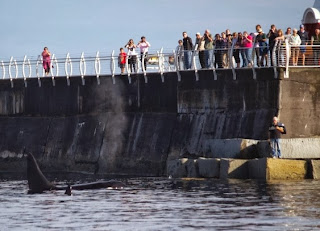 Fotos from whale-watching company who happened to be heading out
for a trip the same moment
Recently people walking along the Ogden Point pier had a big surprise:  a mother Orca with her two calves, feeding right off the breakwater. We can see them sometimes, far offshore. 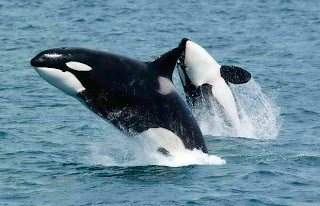 Mostly pods.  But this was the first time Orcas came that close to town. Maybe, other than feeding, Mother Orca came to say “Hello” (that was the impression one of the viewers received). 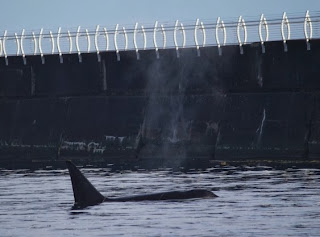 Or is there a spiritual connection with these creatures and those depicted on the mural nearby? But then it dawned on me, No, she was there teaching her calves to hunt salmon for survival.