Antarctica, Part 2: Rendez-vous at the 'Caldera'

Continuing from Part One, our vessel “Ocean Explorer I” (OEI) had to be readied for the new international passengers from Young Presidents Organization (YPO) in a very short time. The crew worked in overdrive to meet the tight schedule.
Because of all the entertainment planned for the coming week, plus Millennium Eve, extra sound equipment and lighting was brought on board. So much so, an extra generator was required. In our view, making the sound levels at the various shows much too loud! OEI was slightly larger than one of the B.C. superferries; the main lounge held only 350 or so people.
Natasha, with her background in Protocol, was asked by the cruise director if she would look after the dignitaries on board, including the family of Robert Kennedy Jr., and F.W. deKlerck and his wife. (Because we didn’t have any art classes during the YPO week, this was possible.)
We mentioned yesterday crossing the Drake Passage can be unpredictable. It’s a notorious body of water where suddenly cyclone-force winds can blow up. Plus there are huge swells created when the massive body of water circulating around the Southern Ocean has to “squeeze” through the opening between the tip of South America (Cape Horn, Tierra del Fuego) and the Antarctic Peninsula.
The YPO members and their families didn’t have their sea legs like our regular around-the-world passengers. Many had adverse reactions to pitching and rolling, making the two and half day journey a shaky affair. (Quickly weeding the landlubbers from the salties.)
Many wore what I call “mar-malade” prevention patches. I’d been to the Antarctic before, and had experienced a few elemental furies. These new passengers also brought with them seasonal winter-time bugs. Everywhere, people were coughing and wheezing. Yours truly had a mild case of bronchitis, which wasn’t helped by the fact our cabin had no heating, but that’s another story. [Yes, Natasha and I were sailing in the Antarctic, without heat in our cabin, on Coral Deck, 'way below]. Our remedy was to run for a few moments the hot shower before braving the morning.
We had excellent lecturers on board, naturalists who gave talks about the wildlife of Antarctica, also an oceanographer. And let us not forget the Zodiac drivers who played such an important role (more on that in a following post.)
The plan Millennium Eve was to make rendez-vous with two other, smaller ships at the volcano known as Deception Island. We’d enter the “caldera” through the ‘eye of the needle’: a narrow opening through the cliffs called Neptune’s Bellows, a navigational hazard at only 230 metres (754 feet) in width. The last eruption at Deception Island was 1969.
Our Greek captain (who had never been to Antarctica), was apprehensive while guiding the ship through the Bellows. To cheers from all, he succeeded in the first effort. Once inside the caldera, officers had to vigilantly hold our position, since it was not possible to anchor. At that time, we were the largest vessel to enter the caldera. On schedule, we were met by the two other vessels carrying the other YPO passengers. The plan called for everyone to join the mothership (OEI) for festivities and celebration of Millennium Eve. This will be the subject of tomorrow’s blog, because it is an epic in itself.
You had to pinch yourself to realize you were at the ‘end of the world’, where a force-10 wind could rear up at any instant, a volcano may erupt, or nearby icebergs might block the exit through Neptune’s Bellows. More to follow, tomorrow.

With all the focus directed on ‘good old Santa’ readying himself up in the Arctic at the North Pole, we’re turning our compass to the South Pole and the Antarctic.
Although I’d travelled to the Southern Ocean region before, nothing compared to an extraordinary, 4-month long experience we had at the turn of the millennium which brought us to Antarctica for New Year’s Eve, 1999. Anyone who has the opportunity to visit this part of the world comes back with a ‘unique’ experience.
Ours began when an ambitious Canadian travel promoter, who’d run a company sending passengers to Antarctica for several years, decided to charter a larger ship for an around-the-world-voyage. I won’t give a play-by-play of our trip, that would cover 10 blog posts at least, but the ship in question was re-named “Ocean Explorer I”, in short “OEI”. The voyage was a complete circumnavigation, lasting 127 days.

My role on board was Guest Artist & Lecturer, accompanied by Natasha, my indispensable assistant. The ship had a remarkable history. She was built during WWII as a troop transport carrier, the “General W.P. Richardson”. Very sturdy, she had an extra-thick, reinforced steel hull, and two engine rooms in the event one was torpedoed. She was a steamship, last of a breed. As a result, very quiet. Average speed on our journey was 15 knots.
Over the decades she had been owned by many different companies since she first took to the seven seas. But all along she had the same Chief Engineer, which accounted for her longevity. I won’t go into all the details about our departure from Athens, which was unbelievably chaotic to say the least. However we finally got underway, lifting anchor in Pireaus, Greece. It was 27 November, 1999, with some 680 passengers, most of whom were well-seasoned seniors, average age in the ‘70s.  All the officers were Greek.
The westbound itinerary called for several stops in remote ports-of-call such as Pitcairn Island, Easter Island, and of course the Antarctic. By the third week in December we approached Ushuaia at the tip of South America. There, a major logistical operation would occur: we’d completely “switch passengers”. Why? The Canadian operator had dreamt up a daring and ingenious “double-itinerary” to mark the Millennium. Those doing the full world cruise got off the ship for one week in Ushuaia and were flown to Santiago, the capital of Chile. There they celebrated the Millennium.
Meanwhile, a very small number of us stayed aboard the ship, and were joined by members of the Young Presidents Organization (YPO), businessmen and their families from all over the world. In addition to our ship “OEI”, the operator had also chartered three smaller vessels to carry additional YPO passengers since their group numbered almost 1,000 in all.
With clockwork precision, this changeover went ahead without a hitch. We departed Ushuaia with the new passengers, who were much younger than the world cruise passengers. 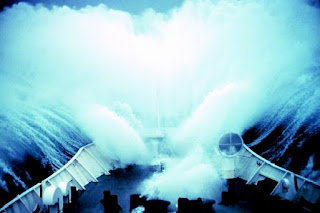 Before arriving in Antarctica, you have to cross the notorious Drake Passage, one of the roughest bodies of water on the planet. And our crossing lived up to the Drake’s reputation, two and half days of pitching and rolling. We were headed for Deception Island (more on this later), where the actual Millennium Eve festivities would take place.
The entertainers on board for this Millennium sailing were Diana Krall, the Chieftains, Dan Aykroyd, Art Garfunkel, the Moffats, Natalie MacMaster, along with guest speakers Robert Kennedy Jr. and F.W. DeKlerck who won the Nobel Peace Prize with Nelson Mandela. To be continued . . . Signing off for now, Henri

The Joy of Imagination

Good to receive comments and questions. Some, like those related to politics or religion, we leave best alone. Others, like this note from Saskatchewan, gets my attention because it deals with a subject very dear to me and may be of interest to you.
“Sir, we have two grandchildren. Tina’s in kindergarten, Tommy in first year elementary school. Like most children, they paint pictures at school and at home. When Tina paints something, we can almost always tell what it is. But Tommy’s pictures we cannot make head nor tail of. Last week the teacher asked them to make a Holiday Season picture.
Tommy splashed bright colours all over the page, and when we asked him “What’s that, Tommy?”, he replied, as if it was perfectly obvious, “That’s a Christmas tree with lots of presents under it.” (And anyone who doesn’t see it, is really dumb, as far as he’s concerned!)
His teacher seems to think his pictures are wonderful. But, is it not the teacher’s job to guide and teach pupils the foundation and beginnings? To us, Tommy’s pictures look like the dabs of a monkey, or like those pictures we see in modern galleries, and which are very pricey at that. Do you agree, sir, that school should discourage children from just splashing paint around?”

First, let me say my respects go to the teacher, for letting Tommy’s imagination roam freely. Too soon in our childhood we lose that precious gem of Imagination.
In the process of growing up, there are already many things a child has to learn and requires discipline. But at the young age of Tina and Tommy, freedom (and encouragement) to express themselves is vital. What I look for in children’s art is the colours a child uses.

In most cases, bright and joyful colours reflect a happy child. The realm of art embraces not only technical skill, but colour and imagination. Later, the required skills to learn will come, if a boy or girl wants to later pursue art. Children are children. Imagination is their world. Foundation and guidance comes later.As adults, some very mature artists express themselves through what’s called nowadays their “Inner Child”.
Many fine abstract artists do not paint non-objective art because they cannot draw, just like a pilot does not fly because he or she can’t walk. Good examples of this child-like quality in mature artists can be seen in works by Marc Chagall, Paul Klee, Joan Miro, and Karel Appel, just to name a few.
This reminds me of an experience I had back in 1959 while visiting for awhile at the home of a friend’s parents. TIME Magazine featured a full-colour reproduction of a painting by the young Karel Appel, a post-war artist from Amsterdam. The painting, titled “Woman and Ostrich”, won the coveted $10,000 Guggenheim Award in NY City. During my visit, my friend’s parents spent the whole evening looking for both the woman and the ostrich, to no avail . . .
Posted by van Bentum