We mentioned the passenger / student who arrived at 10 am in our art class with a cocktail in her hand.  Before the class she’d been also to the beauty salon.  Yes, already then there was a Spa on board ship. At one point, in the Bar (she was a bar fly), she said to Natasha, “Do you like my rings? Choose one”, she said, “then I’d go to the insurance company and say I’d “lost” it.  Choose two for that matter, eh?” Natasha declined her ‘kind’ offer. Our table mate was Snr. Manuel Lema, a friendly man from Puerto Rico who only spoke Spanish, which I spoke also.  He was pleased to have someone to chat with.

Seated in the Dining Room with "mystery woman" and Sr. Manuel Lema (right)
Later, a woman joined us, making the table of 4 complete.  Adorned with precious jewelry, always a mysterious smile, she did not talk much.  Except we learned she’d been widowed four times. “I’ve put them all under”, she declared.  Nearing Cape Town, South Africa, we asked if she was going on safari.  “Are you kidding? They’d put me in the clink!” “Why?” we asked.  That mysterious smile again.
Another very memorable passenger was Major Martineau.  English, but resided in Vevey, Switzerland.  He was in his early ‘80s and traveled with his personal valet, like the Somerset Maugham era. There was always after-dinner theatre.  Major Martineau could not stand it when women put items on chairs to hold seats.  Nor was he pleased when they wore hats obstructing his view of the stage. “Those women with their damned purses and hats!” he’d exclaim.The Major had an interesting background.   A figureskating Cup was named after him, the Martineau Cup.  He owned already in 1930 a famous skating rink in  London, also race horses and jewelry stores. We liked his boldness and impish nature.   He often invited us to one of his cocktail hours in his suite. Here you can see us together with a couple from Newcastle, UK. 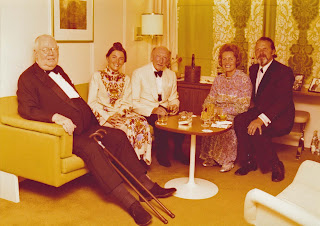 At the suite of Major Martineau (left), with a couple from the UK
“If ever you come to Europe in the summertime, look me up.  I’ll send my chauffeur to meet you in the Silver Cloud”, he said one day. We followed up his invitation. Two years later we explored to Europe with a 3 month Eurailpass first class pass. His chauffeur indeed fetched us in the classic Rolls Royce.  We had a memorable visit in Vevey with the Major. Out of the blue, he offered Natasha one of his jewelry stores, but she graciously declined this unexpected offer, which came with some strings.
Here is another anecdote. A senior bar fly was wondering what to give her son for his birthday.  After a few martinis, she found the solution, and sent a telegram saying she was giving him a football team she owned. 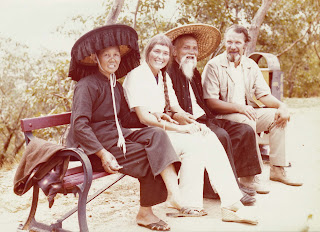 With friendly local couple, in the New Territories
While in Hong Kong, I had a complete white suit made by a tailor.  And in Bangkok, a beige suit.  We mingled also with passengers during the exotic shore excursions. 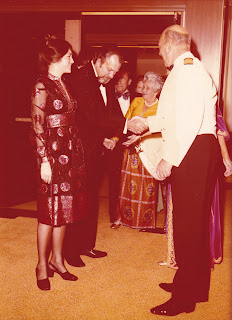 Receiving line, Captain's Night (Captain Alf Morner)
We looked like millionaires.No one believed we had no home and were nomads mostly doing housesitting. When we disembarked, we had no place to go, and stayed at Natasha’s parents in Toronto for a few weeks.

Well, we hope that answers the question put to us earlier, asking if we could say somewhat more about our world cruises in 1974 and 1975 with Royal Viking Line. The person who asked the question, her parents had been on both voyages, so we must have come to know them.  Of course the full play-by-play would amount to a book.
Posted by van Bentum

When we travel and encounter
Californians
telling them we're Canadians
We're hearing, "You send us all that cold."
What can we say, if it's so? . .
No more can we be told,
for the Alchemists in the skies
are transmuting Saharan dust out of Africa 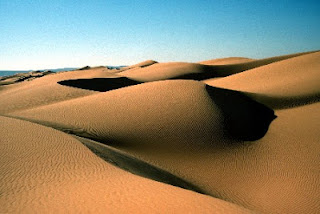 Dropping it on Californians, as snow! 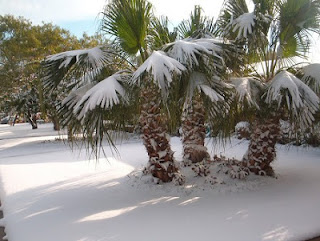