From Quartet to Quintet 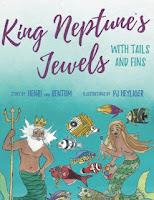 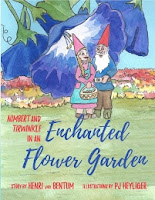 Our second book, "Nimbert and Tirwinkle in an Enchanted Flower Garden"
written by Henri van Bentum, illustrations by PJ Heyliger


Although it’s usual for me to spend a lot of time at home, during the recent and ongoing Covid-19 lockdown, while we were unable to play our regular Snooker games 4x/week, this situation added extra “staying-put” time.
The invisible killer C. virus has the whole human family globally in its grip. So, what to do? Something memorable perhaps, using the creative little grey cells.

Eureka! Why not write another children’s book, following up the four others? That would make it our fifth, a quintet.

A few email chats with our friend in Arizona, PJ Heyliger, who illustrated the previous four books, settled it.

And so, with the green light, I wrote another story, which PJ will once again illustrate. Already several sketches have seen the light.

The story is about a Cheshire cat. That’s all we’re telling you, for now. When the book is completed, we’ll be sure to tell you more.

At least the self-isolation during the C.v pandemic will result in something good, as it has given me (and many others) an opportunity to use their creativity. 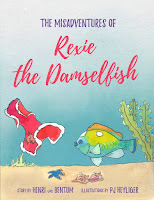 Our third book, "The Misadventures of Rexie the Damselfish"
written by Henri van Bentum, illustrations by PJ Heyliger 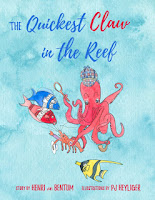 Our fourth book, "The Quickest Claw in the Reef"
written by Henri van Bentum, illustrations by PJ Heyliger 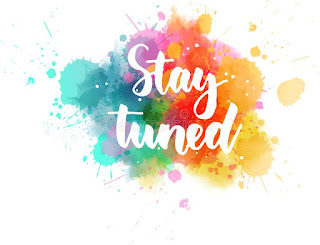 Stay tuned for our fifth book, coming in 2020

Getting to Age Ninety-One

In Indigenous cultures, when Elders advance in age, this is often expressed as the journey of the four directions, taking them back to the East --- where life began, where the Sun rises -- as part of the eternal cycle.

Aging is something I can talk about, being 90 years young. Here's an aphorism I wrote nearly fifty years ago:

Where is the line
Is there a line
Where autumn of life ends
And winter begins.

Heading towards the 91st orbit in August. How did I get this far?  Well, in my childhood a pretty strong immune system must have developed, because over the past nine decades I’ve ‘slipped on a few banana peels’, as they say, having several experiences on the health-related side. Beginning at age 2.


For those of you who don't know me, what follows might seem a long list of suffering and pain.

But for the greater part of my life, I’ve been fortunate to have overall good health, and a very rich basket of life experiences, as witnessed by the hundreds of posts on this blog.

For posterity, here is a brief synopsis:

Henri van Bentum, around age two.
This photo helped in finding Henri after
he was taken away by the Gypsies.  See more details here.


1931: The Netherlands - as a toddler, had Diphtheria. In those days, it was (and still can be) a serious illness. 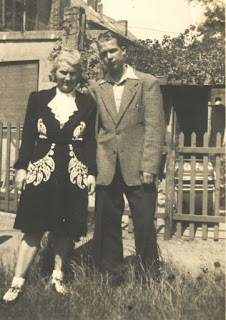 
1943: During the war, I developed a mastoid (ear) problem called "mastoiditis".  This was a common cause of death in children.

An operation, a mastoidectomy, was essential, but conditions were not good. Many doctors had been taken away by the Germans, so the operation was done by a retired surgeon with less-than-perfectly-steady hands. 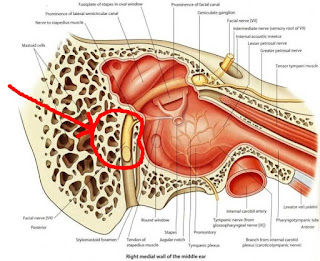 The Ear: here the arrow points to where you can see the proximity
of the mastoid bone cells to the facial nerve

There is a 1 in 1,000,000 chance that during this procedure the facial nerve could be cut. This is what happened to me -- resulting in paralysis of the right side of my face and losing my hearing in the right ear.

1952: Next, Tuberculosis on both lungs. Spent three years in the Zonnestraal sanatorium in the Netherlands. See my earlier post about this remarkable and pioneering facility connected with the diamond industry (my father was a diamond facetter), now a UNESCO World Heritage site. 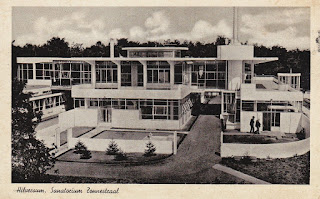 
1961: After immigrating to Canada four years earlier, my ear acted up again. Another operation was necessary. But this time, the surgery was done by a very fine doctor who also became a close friend and patron, Dr. Wilfred S. Goodman ("Wilf").

It was Dr. Goodman who paid for me to travel by train to the Rockies in the summer of 1959, to paint in Banff. This experience is written up elsewhere in this blog, click here.  Later I donated to Wilf and his family all the paintings done in Banff and region. 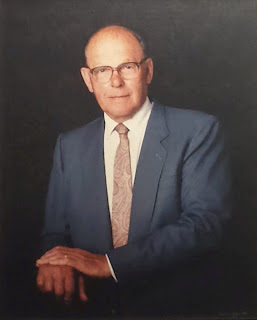 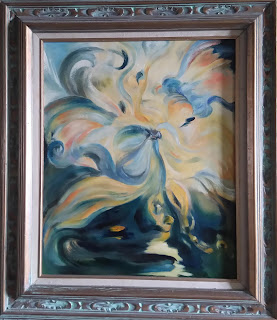 The oil painting (above) was painted right after surgery. I had asked if I could have my paints and material ready so that when I came out of the anaesthetic, I could capture the feeling.

Not long after this operation, Wilf asked if I would like to observe an ear operation. (Today such a thing would be impossible, for a lay person to be allowed in an operating theatre.)

I said "Yes".  During the surgery Wilf had a microscope with which he performed the operation, while I was able to observe what was going on, through another microscope.
Not long after this experience, I created this painting, "The Ear". 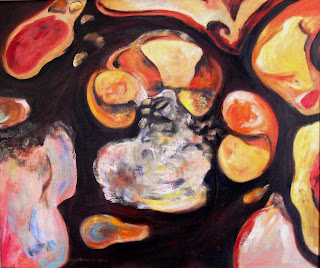 "The Ear", Henri van Bentum, oil on masonite, 1961
Painted after observing through a microscope, an ear operation.
Collection of the Goodman Family


1961:  Dr. Wilf Goodman encouraged me to have reconstructive plastic surgery in order to restore some symmetry to my face.

The 8-hour operation was performed by the late master reconstructive plastic surgeon, Dr. Hoyle Campbell, in his clinic, the Institute of Traumatic Restorative Plastic Surgery, established in 1956 after he worked at three Toronto hospitals. I didn't have to pay anything.

Dr. Campbell is a legend in his field, and devised many new treatment methods. Dr. Campbell had a wealth of expertise, he had helped many disfigured soldiers after  WWII. 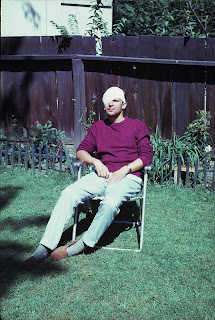 
The surgery succeeded in restoring some symmetry to my face. 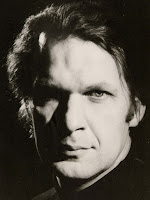 
1980: we moved to Banff, Alberta and lived there for five years.  The only health-related incident during our time there was surgery in 1983 for varicose veins in my lower left leg.

Thankfully, Natasha just 'happened' to be home from work that day, very unusual for her.


She got the ambulance there within seven minutes. Because we arrived at St. Paul's Hospital so quickly, damage to the heart was confined to one area, but I had to spend five days in hospital. 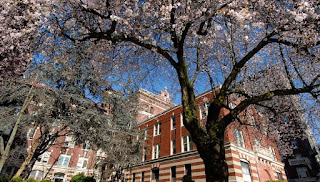 However, when I was being released, the doctor tole me to take an aspirin every day, regular dose, instead of low-dose aspirin. Little did I know this would result in stomach bleeding three months later, and yet another trip to hospital. It should have been a low-dose aspirin.


1988: Vancouver – unfortunately the mastoid problem of my youth came back, requiring surgery once again on my ear.

During this procedure, in spite of my warning the doctor that a lot of reconstructive surgery had taken place in that area and “to be careful”, all the good work of Dr. Hoyle Campbell was undone -- the facial paralysis returned.

The operation had been necessary, however, since two 'cysts' were discovered and removed. 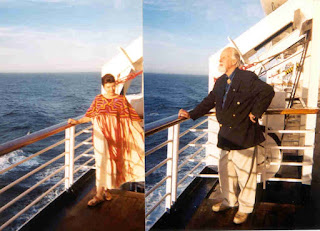 Natasha and Henri van Bentum, aboard "Marco Polo", 2002
2003: During our time based in Vancouver, Natasha and I had been spending a lot of time on ships, where I gave creative exploration classes and also lectures.

Late on the evening of Friday, June 21 (the next day we were supposed to sail to Alaska), I started trembling and turning blue. Later we learned this was a sudden onset of Hypoxemia -- a dramatic loss of oxygen.

Natasha came to the rescue once again, since when we arrived at Emergency, the Triage nurse wouldn't let Natasha go in with me.

Natasha knew she had to explain to the Emergency doctor about my medical history, and let them know I was hard-of-hearing.

(Due to the facial paralysis, the doctors might assume I’d had a stroke which was not the case.) 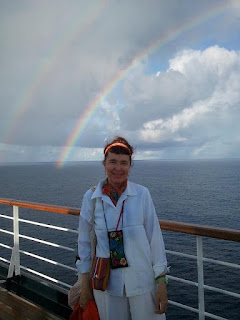 Natasha to the rescue

However she persisted and rushed into the large open area of the Emergency area where I was lying on one of many beds (mostly filled with several drunk people, it was Friday night). She said,“You’ve got to save him! He’s a great artist!”

Immediately everything changed. The doctors wheeled me in the “ultra-Emergency” room with specialized equipment and went to work on me for an hour.

During this hour I nearly went “over the horizon”. The doctors said it was touch and go. NDE.  'Was in St. Paul’s Hospital for five days and underwent numerous tests, all showing up 'normal'.

The cause of this dramatic and sudden onset of Hypoxemia was completely unknown and the doctors couldn't figure it out.  The doctor who had looked after me the most, a woman from India, called me “her mystery man”.

Increasing deafness in my ‘good ear’

After the 1943 mastoid-operation-gone-wrong of my youth, I’d lost hearing in my right ear.


Now I was becoming increasingly hard of hearing in my ‘good ear’, the left. Despite having a hearing aid, it was still very difficult to hear.

2004: We moved to Victoria in 2004 and it was only nine years later that another problem arose:


2015: In the summer of 2015, I was diagnosed with Bladder Cancer, a big surprise.  No pain, good appetite, sleeping well. The only symptom was blood in the urine. 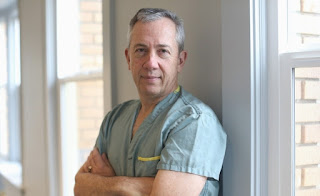 2015-2017: August 2015 surgery, a "Transurethral Resection", was performed by the late Dr. Paul Whelan: a success, tumours were removed. Appreciation to our family doctor, Mark Sherman, for referring me to Dr. Whelan.

[On a happier note, during this period, between 2015 and 2018, I wrote four children’s stories, illustrated by one of my former art students, PJ Heyliger, who lives in Arizona. See my blog post of April 2018, "It's a Quartet!"

2018: Victoria – in March I tripped in our apartment and came down hard on back and head – a “smash hit”.  X-ray revealed a compression fracture of the L1 vertebrae. Six months of pain, but finally healed by itself, without surgery. 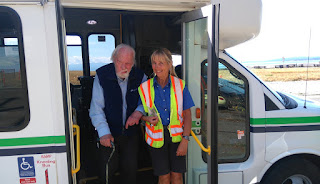 After my “smash hit”, we started making use of the helpful Handy Dart service

2019: Victoria – the X-Ray the year before, for the back injury,  also revealed the presence of three Abdominal Aortic Aneurysms ("AAA"'s).

These are being monitored with CT-Scans since there is a danger the larger of the three could burst, which would be fatal.

2020: Victoria - another CT-Scan booked for early June, to see how the bladder and aneurysms are doing.

Our very fine family doctor since moving to Victoria, Dr. Mark Sherman
who also teaches mindfulness training to other physicians

However, during the recent 'lockdown' for the Covid-19, I've written another children’s story – hopefully to be published this autumn -- which will make it a quintet! 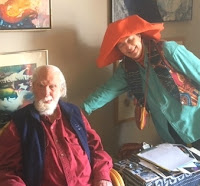 Here we are, with Natasha – my partner, caregiver
and the "rock" of our household, on her birthday, 2020
(Natasha is wearing a huge gardening hat, a birthday gift from a close friend.)

We realize I’m not alone in having an ‘interesting’ medical history, and ups and downs along the journey of aging. 'But thought I’d share this with you.

Henri van Bentum,
Victoria, BC   May 2020
Postscript:  For almost two years after writing the above post, Henri remained in good health, but started to slow down towards the early part of 2022.  He left us to go on a new journey, at 04h00 the morning of Saturday, April 2nd.  (See obituary, post of April 5th.)