Blue Ribbon Eels, Indonesia
On another one of our several snorkel/dive expeditions, this time in the Banda Sea of Indonesia, we were on a boat that held 24 passengers, 15 of which were colleagues of mine. That’s how I was able to join these memorable snorkel/dive journeys, through travel with a group of friends.  By having a dozen or more people, we’d sometimes get one or two free tickets or at a 50% discount. We sailed from Bali. 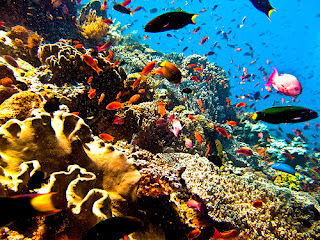 The ocean life of Indonesia’s tropical waters makes you feel like you’re in a giant aquarium.  All those dazzling colours.  Fish that look “like jewels with fins”, as I wrote in one of my Aphorisms. 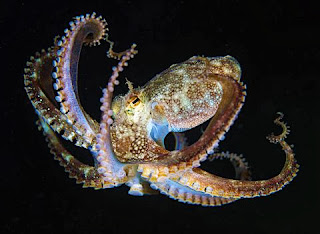 Octopus, Indonesia
You don’t need to be a diver to experience this expedition, snorkeling provides sights galore of the fascinating underwater life. A buddy and I spotted an amorous octopus couple amongst the brain coral and blue-green giant clams, so big they could easily snap a leg in two. 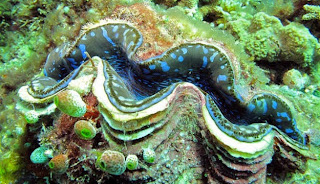 Giant Clam, Indonesia
Then there are multicoloured Nudibranch with the Spanish Dancer being the prima dona of the species, black and white sea snakes, which are venomous. Not for the feint hearted. 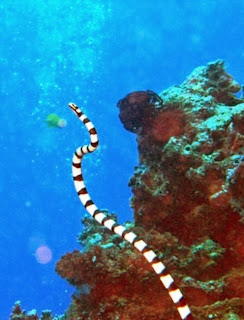 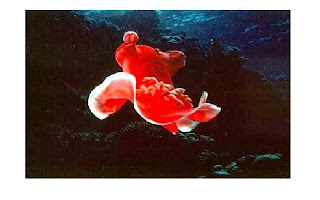 During the voyage we anchored at several islands (there are more than a thousand in Indonesia).


One of which was Komodo, part of the Lesser Sunda Island group. A fair distance from Bali and very remote, this island is home to the notorious giant monitor lizard or Komodo dragons. They are the heaviest lizards on Earth. (Very different from a recently discovered, smallest (1/2 inch) lizard in the world). 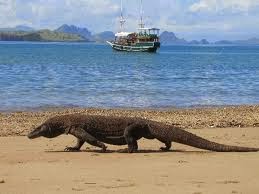 Komodo dragons have long, flat heads with rounded snouts, scaly skin, bowed legs, and huge, muscular tails. Despite its bulk and size, averaging 3 metres in length and 150 kg, it can run up to 18 km per hour in short bursts. We walked in the blistering hot sun and humidity for about half an hour in order to see first-hand these giants having their “lunch”. We had a guide with a rifle, so we were daring to enter the ‘dragon’ territory with this protection. Lunch was a goat which had previously been “put to sleep” and hung by a rope on a small, but strong tree trunk. 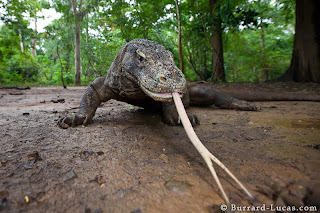 It was not long before we noticed a slow-but-sure approach of the dragons, tongues flicking, and increasing speed as they approached their ‘lunch’.  A well-fenced area enables the viewer to witness the spectacle without too much danger.  It allowed us to see how swiftly and ferociously these so-called monsters devoured the goat.


Animals who escape an attack are still not safe, because the Komodo’s saliva teems with over 50 strains of bacteria. In a day, the victim dies of blood poisoning. Dragons calmly follow an escapee for many kms using a keen sense of smell. In the past (and still today) many daring or curious explorers never returned from their trip to this region and became instead a meal for the Komodo dragon.  Hence nowadays the safely measures imposed by the government. Despite these precautions, I found myself looking around in all directions with my binoculars, to be on the safe side.  You never can tell, can you?
Henri van Bentum