Rancho Grande wedding, and the Lone Gringo (Part One)

Yesterday we talked about a banquet in the Tuscan countryside. Now where did I experience another banquet ‘en plein air’? Ah yes! In Mexico. Let’s turn the clock back to 1963. 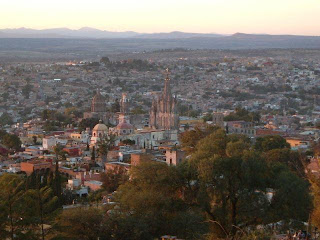 It all began in San Miguel de Allende. We rented a villa situated on a hill overlooking the historic town (declared a national monument in 1926 and now a World Heritage Site). There I painted mostly watercolours, on the patio. A few times a week I took a narrow path down to town, for art supplies and mail.
Near the Zocolo and La Parroquia, (Church of St. Michael the Archangel) was the “Cucaracha Bar”. Pedro the owner was a very large, heavily moustached fellow. He had mastered the art of getting “borracho” and then sober again by drinking pure Tequila.
Before heading back up the hill, I’d always stop for a Cuba Libre con limon. Pedro and I got to know one another well and exchanged languages. I learned Mexican, and he some English from me, all in his own ‘feliz’ manner.
One day, Pedro invited me to his daughter’s wedding. What an honour! I knew he owned a rancho. On the appointed day, early in the morning we drove off in his green truck. After about 30 kms we reached a kind of “moat”. He drove right through it, the truck submerged almost halfway in water.
When we came to the other side, I saw a rancho grande situated on a slight plateau like a castle. The moat was horseshoe-shaped with an opening at one end, which is how their cattle and horses entered the property.
The wedding preparations had begun on all fronts. Outside was a very long table covered with a white linen tablecloth and flowers. Remember the film “Con Agua y Chocolate”? Well, that’s the way the kitchen looked. Mama, who equalled Pedro in size and stamina, was busy with the preparations.
The ‘boda’ or wedding would occur in the private Chapel on the ranch. A well-known priest was invited to perform the ceremony and blessings. The bride was beautifully decked out all in white, including elegant white cowboy boots. Rainbow-coloured ribbons were attached to her blue-black hair under a white sombrero. The groom was also in white, from top to toe. 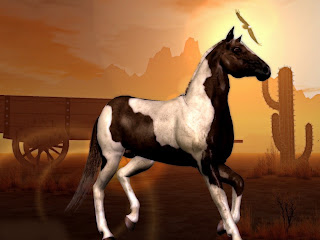 Each rode a Pinto and prepared for a procession towards the Chapel. Everyone, (except the parents and priest who were already at the Chapel) including the rancheros, formed two lines through which the bride and groom proceeded. (Tradition called for the bride and groom to part ways, then unite again at the Chapel).
Halfway the groom fell off his horse. He was soused! Borracho. Since this was Rancho de Vacas (cattle ranch), he had the luck to fall right into some evidence left by the cattle. His spotless white attire was covered with spinach-green and brown coloured splatters. He tried to get back on his horse, but was too drunk. Finally he made it to the chapel, but not before the rancheros dosed him with pails of water. Need we say what he looked like? And to top it all off, the bride, her fiery brown eyes blazing, rode over to the groom and smacked him hard on both cheeks. (Much to the amusement of her father, Pedro.)
I thought for sure the wedding would be off. But no. Although Mama, the bride and the groom’s parents (and the priest) were not amused, the groom had by now sobered up a bit and the ceremony would carry on. Next post we hope to share with you, the fiesta banquet surrounding the ‘boda’.
Posted by van Bentum

Of missing Lamb and Legs in Tuscany 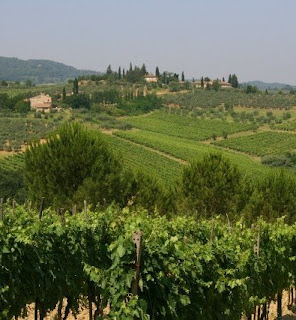 One of my duties for the owner (whose villa, a restored thirteenth century farmhouse, we were housesitting) was to keep track of the sheep and lambs. I counted them every night. One day, a lamb was missing. I counted again, but there were only eight lambs, not nine.
Maybe it had gotten lost? Next evening, again only eight. Next day I asked one of the sons (from the family who looked after the property while the owner was away), “Cos e successo? (“What happened?”).
“Il lupo a mangiare”, was his reply. Lupo? A wolf? That was a surprise; his father, Signor, had told me when we arrived there were no wolves any longer in this region.
Anyway, to celebrate the success of keeping the Wild Boars at bay (see previous post) and to mark my 65 birthday Signora said she was going to arrange a Tuscan banquet up at our place, for family and amici.
Our farmhouse/villa still had the traditional Tuscan outdoor ovens, one for baking bread, the other for roasting.
On the day of festivities, aromas of roasting meat, herbs, spices and garlic filled the air. It was water-mouthing. Because of my passioni, gastranomiche y curiosita alimentari, I helped Signora with pelare, triturare e affetare i vari ingredienti.
When we sat down to dinner that night, Signor started to carve the beautiful roast – it was a lamb. They asked what piece I’d like, and so I requested a leg. La dona, Signora, replied, “Scuse, Enrico, no legs”.
A roast lamb without legs? That was strange. But I had another cut from the roast, and it was absolutely delicious. What a memorable banquet with famiglia and amici. Our feast was accompanied by their own vino di casa, including Grappa; the venerable Brunello (which put this region on the map); and vin santo, along with a surprise birthday cake for Enrico, covered with profiteroles.
The fairy-tale like glow of fireflies danced all ‘round us. There was singing, speeches and countless toasts: to the “Cuoco, Mama”, to “Papa”, to “Enrico”, to “Amici”, and, to “Brunello!” It was a balmy and magical August evening. The mystery of the missing lamb was never solved. But, the mystery of the missing lamb legs? We quickly learned that for centuries the country people of this region have had to use all their ingenuity to survive. It was the custom of Signora to sell the lamb legs to a gourmet restaurant in the nearby town.
Posted by van Bentum

Of Wild Boar and Sweet Grapes

More tales from our five-month housesitting in Tuscany in a region where the famous and costly Brunello wine originates. There is a small window of time when hunting is allowed in the autumn. Signor, the vintner we mentioned in Monday's post, had a rifle. At the edge of his vineyard was a dense Holm Oak forest, home to families of cinghiale (wild boar). The boars love the acorns. 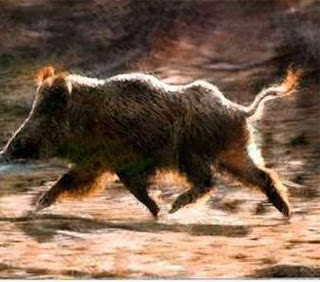 In the middle of the night they would sneak out of the forest --- dark silhouettes. Papa boar, Mama boar, and all the little boars. The ‘spring-offs’ would follow Papa and Mama boar, all in a neat line. Stealthily they’d approach the vineyard, cautious at first, then boldly, to feast on the grapes.
The Signor tried to scare off the cinghiale by playing a tape of loud music in the vineyards, all night, over and over. At first it worked, but the cinghiale soon got wise. Music or no music, they were not deterred from their escapades. One night I tried to approach them, but in a flash they ran back into the forest – tails up, straight as a flagpole!
Signor was getting worried; these raids were a big problem. The summer was one of the hottest on record, with daytime temperatures around 40 C. A family of thirsty and ‘sweet-tusked’ cinghiale can go through a lot of grapes. 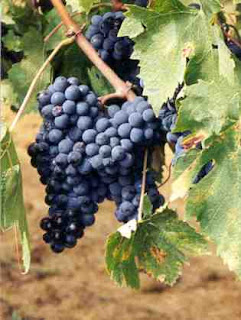 What to do? Take turns doing a watch, like on board a ship? But all hands were needed on deck for work in the daytime. There had to be a way to keep the marauders out if the vintners wanted a harvest this summer.Then it occurred to me - - Signor had a rifle. Why not make a recording of rifle bangs and booms? At least Mama and Papa boar were old enough to know what that noise meant. After a loud ‘Si’, ‘No’ debate, it was agreed. They gave it a try.
The farmhouse villa where I stayed was situated closer to the vineyard than Signor and his family, so I didn’t get much sleep, hearing those loud bangs all night. I preferred the taped music myself, but the bangs and booms were not music to the ears of the cinghiale. It worked! This way everyone was assured of another harvest of wine. Cheers, Henri
Posted by van Bentum

Summertime, and the 'salmon is easy

Fresh salmon in the summer. We’re so fortunate here on the Pacific coast. Now, where else did I enjoy salmon in summertime? Ah yes, it comes back to me now. In Bella Italia, Tuscany, that’s where. I was house-sitting for five months, a renovated thirteenth century farmhouse. 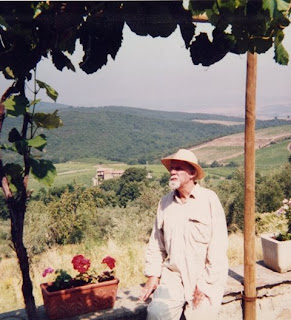 Here's a picture of me on the terrace. The building had been transformed into a villa and was situated deep in the heart of Brunello wine region. It was a classic Tuscan setting, overlooking vineyards and olive groves. Close by was a forest of holm oak trees, home to wild boar, cignale. My closest neighbours were in the valley, a hard-working Tuscan family who got up every morning at 4 a.m.
The father was a wonderful man who spoke no English. He was a poet of the land, the vines, the wine, the people and their history. His sons helped him out. They also had beehives for honey.
House-sitting is all very well, but I wanted to learn the language and get to know the people and wine-making procedures. The family was surprised when I offered to do some work, but quickly gave me a task. I was to put labels onto the wine bottles, all by hand. Each bottle was corked with a simple gadget, also by hand. During the very hot and dry month of August, I also helped out with watering the olive trees, very early in the morning.
By lending a hand, I was invited to have lunch with the family. “Ni labore, ni mangiare!” was the Senora’s watchword. From Canada I’d brought as a treat 6 tins of Pacific Sockeye salmon, knowing I’d be landlocked for months. Also I thought they might make nice little gifts.
After a month or two, Natasha flew out from Vancouver to join me for 3 weeks and to attend an environmental conference in Cortona. She rented a Fiat. We were gone for a few days. When I got back, I felt like having some fish. I went to the cupboard. No salmon. . . Puzzled, I wondered where they'd gone. I was sure I put them away, but then didn’t think more about it.
Next morning I went down to the winery to work. At lunch Senora announced after the antipasti, “Enrico. Today ‘speciale’. Caserole con salmone de Canada!” Beaming, she placed a steaming terra cotta dish on the table and began to serve us.

So, that’s where my salmon swam to! I didn’t say a word, other than “Delicioso, Senora”. One of the boys must have ‘borrowed’ the tins, and never told Mama their origin. I’m sure La Dona did not know via which ‘channels’ the salmon landed in her kitchen.
It was curious because earlier I had once asked Senora when we first met if she liked fish. But being of the land, she wrinkled her nose and said ‘Ah, no”. (That’s why I didn’t offer a tin or two to them before.)
Who would have thought, when those salmon freely swam in the Pacific, one day they’d end up in a delicious Tuscan caserole, served by a hard-working but proud Tuscan family? Did I notice one of the boys looking a bit nervous? Maybe not.
Posted by van Bentum