Two Bald Eagles on our Roof

For those who live in the city, we share with you the recent visits of some wildlife. We live in an eleven-story apartment building right on Juan de Fuca Strait at the Pacific Ocean. 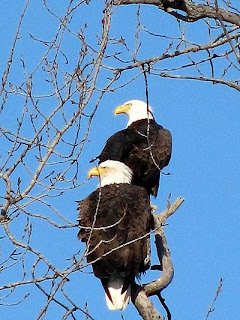 Two days ago, a pair of Bald Eagles decided to make our roof their cosy home. They’re called ‘Bald’ but of course that’s a misnomer. The top of their head is covered with white plumage.I am sure these two "marauders" are plotting ways of tormenting, if not getting rid of altogether, the Blue Herons who recently started to return to the high firs in Beacon Hill Park.
We say this, because last year, a female Godzilla Eagle, all by herself, ransacked and destroyed the Blue Heron rookery in the Park.
We love both the Eagle and the Heron. What’s one to do? Not much, let Nature take its course I guess. Another visitor of late is an Elephant Seals, weighing tons, just washed up nearby here on Vancouver Island. 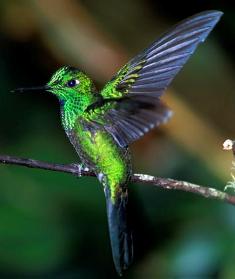 Then at the other end of the scale are the Hummingbirds; some species normally only found in warmer climes to the south are now being spotted more and more.
The Orcas and Salmon are become scarcer, that’s not good news. Seals, orcas and grizzlies are blamed for depleting the salmon, but how about we humans, and fish farms? We consume this delicacy on a regular basis, including ourselves. All sorts of factors including pollution and global climate change result in tricky things, creating all kinds of upheavals in the magical realm of Nature.
Bears are also spotted more close to human habitation. We’re removing their habitat and food sources, so are they not allowed to live? Small wonder that on a few occasions there are encounters between the bears and us (the spoilers and intruders) in what was their territory, their domain, until recently. There were here long before us.
Where will it all end? In the meanwhile we keep looking for other newcomers, but when we spot pink dolphins from the Amazon then we’ll really know all is not as it should be. In the meanwhile, that pair of Bald Eagles above our heads are plotting something. Just as well we don’t speak their language, or they, ours. Signing off, Henri
Posted by van Bentum

From Holy Bishop to Ho-Ho-Ho Santa

Some people look upon the word “Xmas” as sacrilegious, but it comes from the Greek “Xristos”, Christ. Xmas has been used in the UK for centuries. My previous post mentioned the third century Bishop from Smyrna, Nicholas and how we knew him in my childhood in the Lowlands, as Sinterklaas or St. Nicolaas. (Who in turn became North America’s “Santa Claus”.)  In the Netherlands and Flanders, St. Nicolaas rides a horse and is accompanied by Zwarte Piet (Black Peter), a Moor.  Santa Claus rides a sleigh pulled by reindeer. And of course back at the North Pole he’s got his helpers, the elves. 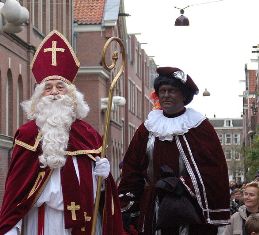 In my boyhood, Sinterklaas was “the” day of the holiday season, much more anticipated than Xmas Day. On the eve of December fifth, we put out our wooden shoes, shoes or slippers with an apple, carrot, or any tasty bit for the horse of Sinterklaas. [December 5 because that was the day of the original Saint Nicolaas’ birthday.]
Needless to say, during the night of December 5, time seemed to pass slowly. Our little hearts bounced with great expectations. We knew whether we’d been naughty on a few occasions during the year, but hoped the good man had forgiven these small ‘side-steps’.So you see, not much different from Santa Claus, and Christmas Eve, here in North America, except almost 3 weeks’ earlier.
When a young boy I recall a few occasions close to Xmas Day when father came home with a small conifer tree. There’d be white candles placed on the branches, and father always put a bucket of water beside the tree, in case of fire. There were no presents or toys since these had already been given on Sinterklaas Day. Sometimes father would hang apples on the small tree (having selected one with sturdy branches to bear the weight). Then there’d be no candles or any other decoration.
Later I learned from my maternal grandfather this was a tradition practised back in the eleventh century and symbolized the Tree of Paradise. At one time, maybe still somewhere in the world,
December 24 was celebrated as the Feast Day of Adam and Eve.
It wasn’t until 1841 when Queen Victoria’s consort Prince Albert of Germany installed a Christmas tree at Windsor Castle. From there the tradition of trees reached out to rich and poor alike. We all have our unique childhood memories, mine go back to Sinterklaas Day much more than December 25.

[There’s a new field called “psychophysiology”; yesterday we read an article about how for example experiences and memories of joy, or sadness for some, around the holiday season can be mapped in our brains and effect our subsequent frame of mind around Christmastime. For many people the family gathering can be very stressful, especially if they feel forced to “put on a happy face”. You can’t fool your brain though].

I like “A Child’s Christmas in Wales” by Dylan Thomas, especially the recording read by the poet himself. All these traditions based on folklore, mythology and pagan history are just as interwoven, complex (and sometimes confusing), as we humans. And “memories” are made of all this.

Here’s a quote from “The Pickwick Papers” by Charles Dickens, who wrote in 1836, five years before Queen Victoria had her first Christmas tree:“Happy, happy Christmas, that can win us back to the delusions of our childish days; that can recall to the old man the pleasures of his youth; that can transport the sailor and the traveller, thousands of miles away, back to his own friends and his quiet home.”

Signing off for now, Henri
Posted by van Bentum

"The Night Before Christmas”, a poem written in 1823 by Clement Clarke Moore, heralded Santa Claus in America. Or so the story goes. But centuries before, (280-342 AD) to be exact, Bishop Nicholas of Smyrna in Turkey brought joy to poor children by strewing gifts and goodies their way on his birthday. 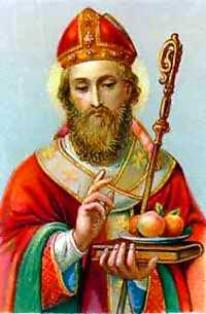 That’s the same Sinterklaas (Flemish) and Sint-Nicolaas (Netherlands) we celebrate on the eve of December 5th (or the morning of the 6th), the birth date of the Bishop. And Saint Nicholas as we call him is patron saint of children.
The pilgrims of Holland brought this tradition to America in the 17th century, also to New York (formerly Nieuw Amsterdam).
From there the Santa Claus morphed into the jolly friendly fellow we know today, continuing to enchant children wherever he goes on his sleigh, the famous sleigh powered by reindeer.
Speaking of which, my favourite Yuletide carol is “Rudolph the Red-Nosed Reindeer”. It is one of the very few with a deeper message and which few seem to realize.
Nobody cared much for Rudolph. He was a laughing-stock and wasn’t allowed to play with the other reindeer. He was ridiculed, mocked or ignored, until Santa recognized great merit in that glowing nose. (Read: as in recognizing his worth and talent.)
Then of course all the other reindeer loved Rudolph. The message in Rudolph’s song isn’t unlike the story by Hans Christian Andersen of the “Ugly Ducking”, who turned out be a swan.
[Just like we all ‘love’ Vincent van Gogh or other artists, now that they’ve been universally recognized, a century or more after they were living and breathing amongst us.] 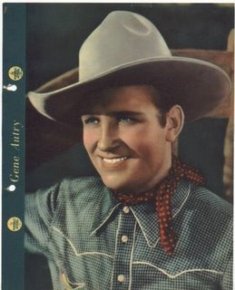 Getting back to the song, it was Gene Autry, the legendary “singing cowboy”, who made an evergreen recording in 1949. That’s when I heard it, during one of my transatlantic sailings with Holland America Line to the New World, when I worked as a steward in the first-class dining room.
Then, we also heard Gene Autry singing “Rudolph the Red-Nosed Reindeer” back home on Radio Luxembourg, broadcast station for the U.S. Army in Europe. (That’s where I learned my first English, through Radio Luxembourg.)
Then, there is the Scandinavian tradition (where the word “Yuletide” originates), with its Festival of Light. Yule has its origin from a Scandinavian word (e.g. in Finnish it’s “Joul”) and means ‘feast’.
Also there is the Norse mythology of Thor, the God of Thunder. He would fly through the sky in a sleigh pulled by magical goats. (And in the American song, the seventh reindeer is named “Donder”, which in my native tongue translates as “Thunder”). Pagan traditions, ancient mythologies and history, all mixed up. More to come on the subject. Signing off, Henri
Posted by van Bentum

What I find truly amazing is the newly-elected government of the Maldives, an archipelago of islands in the Indian Ocean, is seriously considering buying a whole new land for its 380,000 citizens.
Reason – the ocean level is rising by the month, and the atolls of the Maldives are in great danger of becoming submerged. The highest point of land is only 2.4 metres above sea level.
We had the privilege and experience of visiting the Maldives on several occasions by ship. It’s made up of a chain of 1,200 islands and coral atolls about 500 miles from the tip of the Indian continent. The new president, 41-year old Mohamed Nasheed, is a human rights activist who was once imprisoned (a former political prisoner, like Nelson Mandela). He started his tenure in the islands’ capital of Male last week. This is the Maldives’ first democratically-elected president.
According to the report, tourism brings in $1 billion a year, so there is ‘cash’ for this colossal real-estate acquisition in the making. They will create a “sovereign wealth fund”.
President Nasheed, also known as “Anni”, is preparing for a mass exodus. He’s eyeing and enormous tract of land in either Sri Lanka, India or Australia as options to safeguard his people from becoming the first climate change refugees.
“We can do nothing to stop climate change on our own and so we have to buy land elsewhere. It’s an insurance policy for the worst possible outcome,” he said. “We do not want to leave the Maldives, but we also do not want to be climate refugees living in tents for decades.”
Here we have one of several nations becoming victim of this human-caused problem. Cause and effect. Gratifying to see that at least somewhere, one leader is concerned about his people’s safety and well-being. Signing off for now, Henri
Posted by van Bentum