Surviving Bladder Cancer -- So Far, So Good. And appreciation for the many good wishes from friends

Less than two years ago, instead of Champagne-coloured, my urine showed red.

After seeing our family doctor, who then sent me to a urologist, Dr. J. Paul Whelan -- the first step was an Ultrasound to see “what could be seen”. But the ultrasound couldn’t reveal enough information.

So Dr. Whelan scheduled me for a Cystoscopy, which he performed at the Royal Jubilee Hospital -- a thin tube with a camera and light at the end is inserted into the urethra, enabling him to see inside the bladder.  The Cystoscopy does not take long and requires no anaesthetic.  Laying there, I could also see the images on a large computer screen.

Although earlier on, I'd been told by my family doctor that for someone of my age (87 years young), blood in the urine usually means only one thing:  cancer of the bladder.

However, that day during the Cystoscopy -- to my disbelief -- several tumours appeared. I immediately thought of them as “alien stowaways”.

[We don’t hear much about bladder cancer, yet it’s the fourth most common cancer in men.  Unfortunately, research into this disease lags far behind most other cancers, due to lack of funding.]

The tumours were at such a stage, Dr. Whelan said he needed to get them out quickly, and told me surgery will be necessary.

There is usually a long wait time, and on top of that it was August -- traditionally a “down-time” -- but luckily for me, he was able to book the operation later that same month.

So I went back to the Royal Jubilee Hospital for the surgery, called a “transurethral resection for bladder tumour” or TURBT.  [This procedure is only effective for early-stage cancer.]

I stayed overnight in hospital. Very early next morning, Dr. Whelan came by and said the surgery went well, and he had the necessary material to have the analysis done. So I was sent home. (continues below . . )

The week after the operation was an awkward and messy one, having to use a catheter -- but necessary.  Slowly but surely. the liquid changed from pale red, to deep orange, then to a normal colour.

Two weeks later we returned to the urologist's office to hear the results of the analysis.  It was a positive report.

That was not the end, however. Next step:  preventative therapy --  Immunotherapy, involving a series of treatments using the “BCG” vaccine. Amazingly, this is actually a form of the tuberculosis vaccine.

BCG stands for “Bacillus Calmette-Guerin”, named after two French scientists who developed the vaccine between 1908 - 1921.

Doctors aren’t 100% sure why it works, but believe it makes the bladder react in a way that triggers the immune system to get rid of cancer cells.

In my case, it was a poignant situation:  after WWII in the Netherlands, I had tuberculosis and spent a few years in a sanatorium. [See my blog post of August 4, 2008 about the Zonnestraal Sanatorium].  So the thing that nearly killed me, now helped to save my life.

The BCG is administered by the urologist's very capable LPN. Since having that first round of BCG, over 6 weeks once a week, I’ve had two other rounds but these were three treatments, also once a week.

Recently the latest Cystoscopy procedure gave the “all clear”.  Dr. Whelan pronounced my bladder a “work of art”, knowing that I’m an artist, but also meaning he thought his surgery was a work of art too.

Throughout all of this, with support and care from Natasha, my wife, plus many good wishes from friends far and wide, I maintained a positive outlook.  I worked hard on keeping my spirits high and did a lot of meditation and contemplation.

In many ways, I have been very lucky:  being able to see an excellent specialist - urologist Dr. Whelan - relatively quickly (normally long wait times).  Then the urologist getting surgery booking quickly, before the “alien stowaways” as I called them, broke through the protection wall of the bladder.  If that had happened, the whole bladder would have had to be removed – major surgery.

Thankfully, thanks to destiny and my ‘guardian angels’, this was not necessary.

Because bladder cancer has a high recurrence rate, the highest amongst the cancers, it requires “life-long surveillance”. So the doctors keep you on this regimen of having BCG treatments twice a year, plus further Cystoscopies, to monitor things. [This makes it “the most expensive cancer to treat, on a per-patient basis.” ]

I thought to share this personal experience on my blog, at age 87, since to me it is worthwhile communicating to others the importance of taking very seriously any warning signs like I had at the beginning. 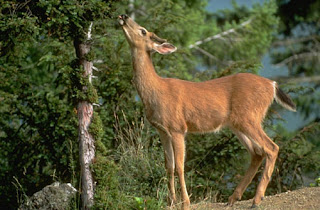 For some time now, Victoria has had deer munching the plants and flowers in gardens.

There have been countless forth-and-back meetings, discussions at local government levels, town halls, about what "to do".

Municipal politicians say it’s a responsibility of the province, so things go around in circles. 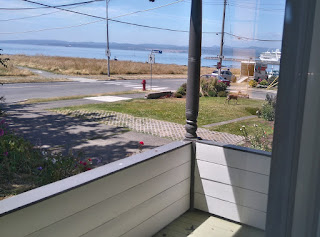 Deer at our next door neighbour.  Look below the truck.

We’ve known about the deer roaming with their fauns, but hadn’t been visited, until a few days ago.  They found their way to the Dallas Road area, beside the ocean, and to our place.  Natasha captured their visit with her mobile. 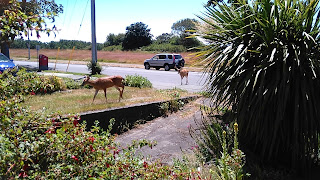 Two four-footers crossing the road to come and visit us.

Hurrah for not culling these sensitive animals, there are alternatives to culling, such as fencing, deterrence, education, to wildlife conscious community planning. 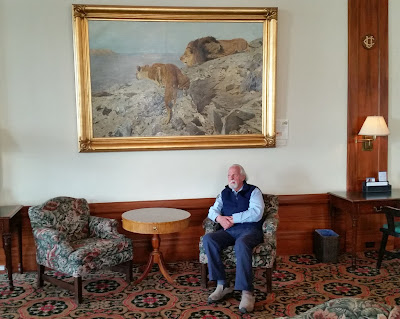 Coming in February, another children's fable written by me with illustrations by PJ Heyliger 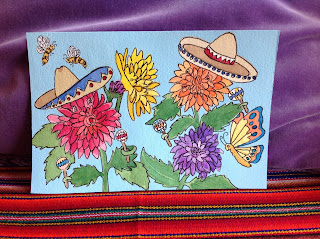 Preview image from the new book. Illustration by PJ Heylger.

No sooner had our children's book been published “King Neptune’s Jewels with Tails and Fins” (see post below re: my story about tropical fish in a coral reef, with illustrations by PJ Heyliger), than we've embarked on another book.

“Nimbert and Tirwinkle in an Enchanted Garden” is a children's fable about a garden Gnome who reveals to me the real reason why we have flowers on Earth today.

Natasha, my wife and partner, with her boundless logistical and technical support, is technical advisor.

Again for this new project, I wrote the story and our friend PJ Heyliger is creating the illustrations. The publication will be available on Amazon, and ready around the third week of February.


As someone said who received a preview of the book, “Nimbert and Tirwinkle in an Enchanted Garden” promises to be whimsical, colourful, educational -- and, joyful book.  For the young and young at heart."