How I Became a Member of the Circumnavigators Club


In my previous post we mentioned we’d elaborate on the question someone asked about “How I became a member of the international Circumnavigators Club?”  We need to set the clock back to 1975, aboard the “Royal Viking Sea”.. I was Guest Artist & Lecturer, just as I had been the previous year in 1974 aboard sister ship “Royal Viking Sky”. 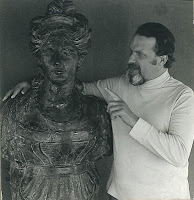 Henri with Antique Figurehead from Bow of Ship
Magnificent vessels. Both voyages were inaugural around-the-world cruises. THE “Crown Jewel” of travel. Because of the success of our program in 1974 we were invited to participate the following year. Total number of passengers for each voyage was 325. Total crew: 175.
Teaching art on board ships was unheard of those days.  Now, under the banner of Enrichment Programs, most cruise lines have incorporated it.  I literally dreamed the whole thing up.  On a cold and miserable November day in Toronto, when I had just been rejected for a Canada Council grant. Out of the blue I had a vision of us aboard a ship in sunny, tropical waters where I was teaching art in a floating art studio.  The moment I told Natasha about my vision, she put together an impressive program proposal with my CV written in her calligraphy, with photos of my artwork, which we mailed to all the major cruise lines. The first to respond was Italian Line, offering a 30-day Mediterranean cruise.  But that meant we’d be back in cold Toronto mid-winter.  So (if you can imagine), we turned it down. We didn’t hear from the other liners. 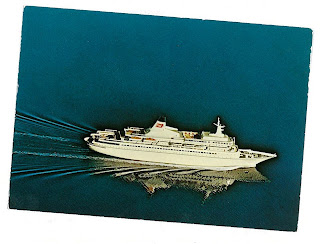 Then one Sunday afternoon Natasha’s  father, who every weekend bought the Sunday New York Times, telephoned. He’d just seen an ad from a company called “Royal Viking Line”, for a world cruise.  “Did you send them a proposal?” he asked. We had never heard of Royal Viking Line.  But on Monday morning we express mailed a package to their head office in San Francisco.
And the rest is history. It was a “dream come true”.  Best of all, they agreed to my proposal:  the time-honoured barter system, i.e. in exchange for my expertise and qualifications as an artist and lecturer, and my experience as a first class steward o/b Holland America ships in the late 1940’s and early 1950’s, we received full, first-class passenger status.  Also, Royal Viking Line agreed to provide all the art supplies for a 4 ½ month voyage which involved creative exploration in five different media. Plus our airfare. What more could you ask for?

Towards the end of the cruise, we held an exhibition of the passengers’ artwork.  Some of the students had never painted before and did nice work. The Norwegian captain proclaimed it a magnificent show and “A job well done”. Approach by Circumnavigator Club members. Now, let’s fast-forward to the second around-the-world cruise in 1975 aboard sister ship “Royal Viking Sea”. We were invited back because of the success of our earlier voyage in 1974. Aboard ship were a few members of the Circumnavigators Club, amongst them the Past-President.  Three days before arriving in New York at the very end of the cruise, we were approached by these Club members.  They said I qualified for membership (at that time there were no women members so Natasha couldn’t join), now that we’d done a complete circumnavigation, crossing every meridian longitude in one direction. (They didn’t know about our circumnavigation the year before, so by this time I was “doubly-qualified”.) I was given an application form and the Past-President said, “Henri, think it over. We’ll be glad to propose and second your application, should you decide to join us.”  My application was accepted. Less than one month later, we received in our mailbox a handsome certificate, signed and dated May 22, 1975, complete with gold seal, black and green ribbons. 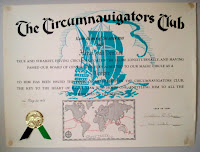 And that’s how I became a member of the illustrious Circumnavigators Club – all because of a dream that became reality from a combination of a grant rejection, a cold Toronto November, and my vision.We termed our program enrichment for the passengers and ourselves. Nowadays, all cruise lines have Enrichment Programs with guest speakers on any subject imaginable.  There are now agents handling for a fee the placement of entertainers, lecturers and art instructors.  Gone is the good old “barter system” we experienced so many years ago on two world cruises – ‘The Crown Jewel of Travel’.

More about the Circumnavigators Club


“How come you’re member of the same club as astronaut Chris Hadfield, are you an astronaut?”  That’s the question I received from someone in Holland.  No, I am not an astronaut.  Although all of us are space travellers!   There is a nonprofit organization, the International Circumnavigators Club, with headquarters in New York. It was founded in 1902 by three people who’d circumnavigated the globe by ship.  They were the founders of this Club which has had through the years some illustrious members.  Buffalo Bill Cody, Houdini, John Philip Sousa, Sir Edmund Hilary, Thor Heyerdahl, Captain Jacques Cousteau, Picard, the baloonist, and many more. One of the qualifications for membership is to have circumnavigated the world, crossing all meridians longitude in one direction. The early members had travelled by boat or  ship.  Air travel changed all that.  Then when the space age began, several astronauts also became eligible and Honorary Members.  Eleven years ago, I proposed astronaut Chris Hadfield for an Honorary Membership. This was accepted unanimously by the Board.  Hence, Chris and I belong to the same Club.


I hope this answers your question.  The Club’s constitution stipulates only 1,000 individuals can ever become members at any given time.   Thus it signals the restrictions and requirements of membership.  How I became a member in 1975 is another story.  Maybe in the near future, we could elaborate on this some more.  Here is the link to the Club’s website.
Posted by van Bentum