We’ve been asked our thoughts about the Costa Concordia situation.  It is a tragedy. Having been at least 30 times on ocean liners and cruise ships (and not including my days with Holland America Line as a First Class steward in the late 1940’s), I guess people are curious because of our experience on the 7 seas.
I’ve been in two shipwrecks.  One, in April 1961, aboard a 60 foot sloop en route to Greece from the island of Ibiza. We were shipwrecked off the coast of Sicily in the sirocco winds. 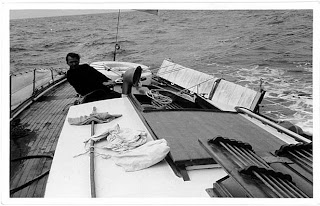 The other, aboard the legendary “Cristobol Carrier” en route from Guayaquil, Ecuador to the Galapagos in May 1969. That shipwreck occurred in the early hours of the morning. The captain was drunk and no one was on the bridge. But we’ve had no problems or mishaps aboard all the other ships.   We still think they’re safe, if you can use that word in general when it concerns travel.
Speaking of the seas and sailing, how about the 16-year old girl from Holland?  Laura Dekker is almost at the end of a solo circumnavigation around the world. Here is the link to her official site. She’s due to arrive back tomorrow on the island of St. Maarten, from where she departed January 20, 2011. You’d think she’d be getting a hero’s welcome in Holland?  Well, yes, everyone except the Government that is.  The Minister of Education claims she did not continue her school education since she took off in the middle of a school season. They may punish her. So, guess, what? 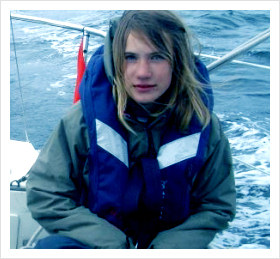 The intrepid Laura Dekker says, “If that’s the case, I will not return to Holland.” Challenging the seven seas, solo, what she has done, amounts to a true education. Speaking for myself, my school education ended when I was 10, due to the outbreak of WWII. Granted she will not get a diploma, neither did I, yet I speak six languages and have been around the world three times.  Not bad for someone with no “education”. Goes to show you how seriously the Netherlands Government considers completion of one’s education. To Laura, we say "Yes, well done!  Bravo!  Chapeau!
Posted by van Bentum

Our visiting sea lion (see two posts below) hasn't appeared for awhile. Must have anticipated the Arctic airflow. By now maybe he's back in balmy Monterey, to play.  Victoria has been pummelled by a good layer of snow. Thermometer outside shows -9C.  Usually we have one or two light days of snow, mostly the wet kind mixed with a sprinke of rain. However, one crocus has presented itself on the front lawn, saying "Here I am, snow or no snow!"  Is Nature not amazing?
Posted by van Bentum No comments: