"Henri van Bentum, artist, was truly a man of the world.
He was a long-time member of the historic Circumnavigators Club, a nonprofit organization founded in 1902 for people who sailed around the globe (*), and who believed in making the world a better place through friendship and understanding.
Henri was an esteemed member of the Circumnavigators.
We will miss him. “Luck to you”, Henri!"
David A. Mink, President (*) The Circumnavigators Club is the only organization devoted to bringing together those men and women who have circumnavigated the globe by any means, crossing every meridian longitude in one direction. The Club's purpose is to encourage global fellowship and understanding. It strives to inspire people to see and absorb as much as they can about the world in which we live. Motto:  Through friendship, to leave this world a little better than we found it.  https://circumnavigators.org/ 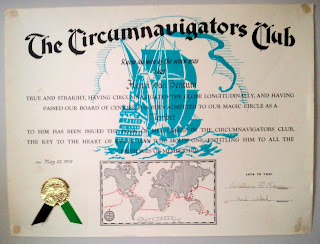 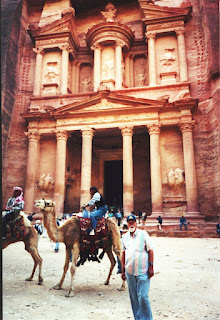 Henri van Bentum: A Life of Amplitude - by Seonaigh MacPherson

"I have been invited to say a few words about Henri as a friend and collector of his art. Yet, my first contact was with Henri as a teacher, so I would like to start there.

Our first contact was in a colour workshop Henri offered in Vancouver in 1987. In this workshop, he demonstrated how through three simple primary colours - red, blue, and yellow - the entire universe of colour could be generated.

As evidence, he had us prepare our own colour wheels. This reflected one of the abiding things Henri has shared with me - through instruction or by example - to return to the fundamentals.

It was a kind of simplicity, as he called it, or practicality, that was as apparent in his art as in his cooking, which focused on simple, nutritious ingredients combined to produce taste, health, pleasure, and stimulating conversation in equal measure.

The second thing I learned from Henri was creativity in living, not just in art. He modelled and embodied how, through modest means, it was possible to create a life of amplitude.

This is a rather odd word or phrase that came to me as I contemplated Henri, so I thought to check up the meaning of the term in the Meriam-Webster dictionary.

While commonly known to signify the size of a wavelength in physics, the definitions continued on to describe qualities of character rather than matter. In these cases, amplitude referred to an extent of dignity, excellence, or splendour or, alternatively, the quality or state of being ample as in fullness, abundance. 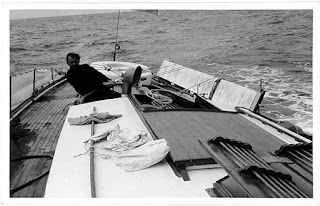 This encapsulates for me the kind of creativity in living manifested by both Henri and Natasha - the cultivation, through modest means, of a life of dignity, excellence, and splendour that resulted in a sense of a full and abundant life.

The third thing I learned from Henri is one of the qualities ascribed to the motto of the City of Amsterdam's coat of arms described on the program: steadfastness.

In this case, he taught me through example and instruction the meaning of integrity, loyalty, and being there.

This final quality of being steadfast was something I valued deeply in our friendship as well - a kind of persistence, loyalty, consistency, and presence of duration.

Over the years, Henri and Natasha offered me a kind of refuge as I moved around the country and globe, a touchstone or reference point to return to over the years.

The second quality I valued was the sense of nourishment and enrichment I found over the years in his company. This included delicious meals, as described, which Henri tended to prepare, but extended to the rich colours and textures of his and Natasha's apartment, art, and clothing, collected from around their travels around the globe.

And so too it included enriching conversations and ideas, which were as much a part of the meals and overall experience as the appetizers, wine, main courses, and desserts.

Finally, I valued his quality of caring, a kind and generous capacity to take interest in the lives and well being of others.

As many of us, who knew him well appreciated, Henri could be fierce in defence of integrity and high standards of conduct. This ferocity was a kind of circle of fire that, once penetrated or crossed, welcomed us into his circle of care.

Why do I collect his art? Because just as he and Natasha gave me refuge in their home and friendship, his art and artistic vision continues to give me refuge every day in my home.

As others have pointed out, it is their use of light, colour, and perspective that give them this capacity to uplift.

As a sidebar, when I frequented Henri and Natasha's house for dinner while completing my doctoral studies at UBC, Henri like to tease me that I was becoming a Paper-Head Dummy (Ph.D.).

There was something very accurate in all that. I recall a doctoral seminar room in which dozens of chairs were stacked at the back of the room with no pictures on the wall, not even a poster.

It was as if as we reached this apex of education, we were somehow scaffolded out of our senses, as if beauty and awareness no longer mattered, to be replaced by a kind of abstract conceptualism.

In contrast, while Henri is known as an abstract artist, his approach to the abstract is distinctive - perhaps it might be called an abstract ecology.

It is this unique perspective in his art that invites a sense of connection to realities beyond the ordinary appearance of things - both to the cosmos, as has been well represented here, but also to the biological.

As above, so below.

Indeed, it is this biological resonance in his art that has drawn me to collect his work. In his canvasses, I don't merely see artfully placed shapes and colours, but echoes of our biological embeddedness.

Don't get me wrong: He did not paint them to be representational. Rather, they reflect his unique perception and an imagination that springs from nature itself.

In his abstractions, we see the resonance of the microcosm and macrocosm, implicit in the beauty of his forms.

"Coral Dream", acrylic on paper, 1965, Henri van Bentum
As an example, I have brought two of my favourite paintings of his. The first is "Coral Dream", an acrylic on paper, the first painting I bought of his when still a doctoral student. I wanted to invest in this rich life of the senses and feel that it wasn't something I was abandoning in pursuit of that paper-head dummy!

To better share with you my experience of these paintings, I perused the Internet for close up photographs of coral and found this image -- (here Seonaigh holds up a picture) --- that shows how closely his perception paralleled coral in the wild. 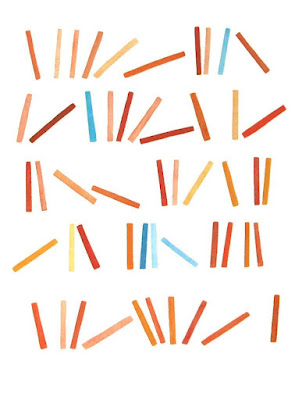 "Spatial Rhythms #2", watercolour on paper, 1983, Henri van Bentum
Likewise, the second painting, a watercolour, from his Spatial Rhythms series, always reminded me of chromosomes lining up to form DNA. Sure enough, when I looked for electron microscopic images of chromosomes, I found this picture --- (Seonaigh holds up another photo) --- with such close parallels to the abstract painting.

In this way, I hope you can join me in appreciating Henri's unique approach to abstract art as a way to perceive our interconnection with the microcosm of the Earth just as it echoes, too, the macrocosm.

So, thank you Henri, for having enriched my life and for living a life of amplitude. Thank you to all of you as well for sharing in this appreciation and celebration of his life." 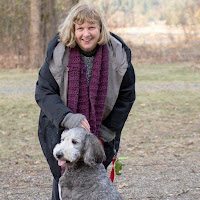 Henri van Bentum
1929 - 2022
Introduction from Natasha:  Henri's memorial was held on August 13th (his birthday).  Over the next few weeks, we'll be publishing a few of the speeches given by guests at the gathering.
We begin with Henri's close friend here in Victoria, BC, Brian W.E. Johnson.  Brian collaborated with Henri on several projects in connection with van Bentum's "Organiverse" series of 100 mandalas, most recently a video project with poems and songs by Rabindranath Tagore, including "Gitanjali" and "Fruit Gathering".
On Henri van Bentum, by Brian W.E. Johnson
“There has been much said already, with eloquence and clarity, about the breadth and scope of Henri’s interests and activities, and his life’s experience. It is amazing.

I would like to complement some these Macro considerations with some micro mentions. So here are some personal observations and reflections:

Today is Henri’s birthday, and he was born under the Astrology sun sign of “Leo” with a strong Pisces influence. The sign of Leo has “Royal” associations and Henri surely displayed these qualities.

Henri was the main character in this theatre production, and the rest of us are the cast extras, hanging about and tending to his royal Leo highness.

In the real world of the body politic, royal power is borne of the sceptre, representing temporal power in the kingdom. Royalty are feared and respected because of this.

However, in the case of Henri van Bentum, it is not the power of the sceptre and the royal army, but rather, an unusually sensitive and receptive presence that somehow casts a regal-like aura.

Henri lived with enhanced fluid sensitivity, especially to colour, nuances of form, shades and combinations… and, in addition to paying careful attention to detail, Henri embodied an expanded, or perhaps better said, an unblemished sense of wonder.

These combinations and receptive qualities help to explain how and why Henri would often enhance situations and people simply by his presence, and this in turn, would inspire creativity and highlight beauty, in many diverse situations.

Henri and I collaborated on several initiatives, most recently a video project that displays his outstanding Organiverse mandalas in tandem with the poetic verse of “Gitanjali” written by Rabindranath Tagore.

The following is Tagore’s poem #96 in this series: