How about an 'aperitivo' with my cheese 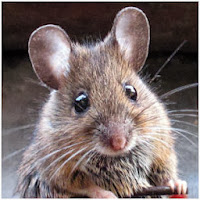 In these days with negative headlines everywhere, we're posting this anecdote as a contrast to the darkness of so-called ‘news’. In our neighbourhood, just like every place with a hint of 'countrysdie', some homes have mice.  However we do not. That's because our landlady, who lives in the same house, has three cats.  Count them, three cats.  No wonder the mice take a detour. Speaking of mice, we are told their favorite delicacy is cheese. Except now I’ve discovered we’ve forgotten about the aperitivo which accompanies a nice nibble of cheese --- in this case --- sherry. This is how the discovery came about.

The story begins 11 years ago during a transatlantic voyage from Barbados to the Mediterranean aboard Orient Lines'  “Marco Polo” (the former ocean liner 'Alexandr Pushkin' which we also sailed with many years before). I was guest art lecturer. One port of call was Cadiz, Spain. 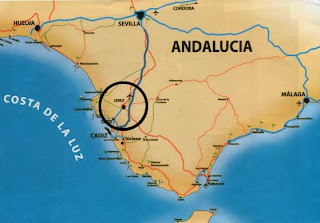 We opted for a shore excursion to the Gonzalez-Byass winery at Jerez de la Frontera (“Sherry Frontier”), famous for its Tio Pepe sherry. Our group was given the usual cordial tour you would expect from visiting a winery, complete with a mini-trolley car to transport us from here to there, so vast is the Gonzalez-Byass property.Our spirited guide, a local girl, was well informed. Her English was almost fluent, through which she clearly communicated to us the ABCs of sherry wine making. 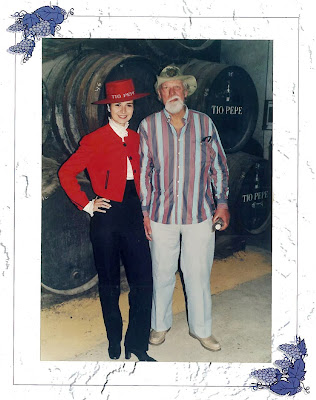 Elegant "Tio Pepe" official VIP guide with Henri van Bentum, Jerez de la Frontera, Spain
Many large barrels were signed in white paint by their owners, such as statesmen, movie and rock stars, plus famous authors. For instance, there was one inscribed in honour of Winston Churchill as you can see in the picture below.  Towards the end of our extensive tour, we came to the last in a series of large warehouses where the wine was stored - each building filled to the brim with an impressive array of handsome wooden barrels. 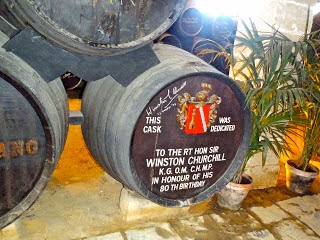 Suddenly, out of the corner of my eye, I caught a glimpse of what looked like a mouse. It was speeding towards a ceramic bowl on the ground, next to one of the barrels. My initial reaction was, “That’s funny, a wind-up mouse. Someone has inserted a ‘funny bone’ experience into the tour.”  Then I realized this so-called wind-up mouse was actually climbing a tiny ladder to reach the rim of the bowl. Then the mouse started to sip eagerly from the bowl while standing atop the ladder. 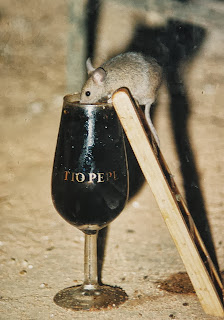 This instantly removed my first impression of a wind-up mouse! Only a few sips, and off it went, quick as a flash, but maybe a bit less so than when it first appeared.  Then another darted out from behind a barrel and followed the same routine. By now, our group was absorbed in watching this display, full of amazement, chuckles -- and some shrieks. 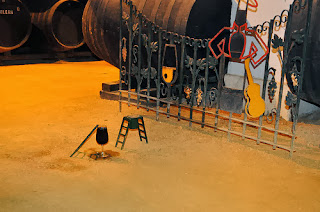 The guide noticed our fascinated looks and calmly said, “Oh, they’re just mice sipping sherry”. Then she told us the story: years ago, one of the Gonzalez-Byass owners was called away from his dining room where had been enjoying a chorizo and cheese tapa and a tiny glass of sherry. When he returned, he came upon a mouse calmly sipping from the glass of sherry.The gentleman was so intrigued by this behavior that he decided to do some sleuthing. He placed a small bowl with sherry on the floor, left the room, and peeked around the corner.   The rest is history. 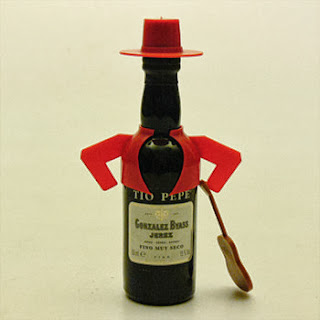 Then and there he decided to regularly honor these creatures with provision for a daily sip of sherry, seeing as how they in turn enjoyed his Tio Pepe. But the owner went one step further, and had Lilliput-sized ladders made. The mice had to perform a kind of circus act running up the ladder before getting to the golden spirits.  What is curious is the mice don’t get at all wobbly. Perhaps a bit slower.  But while imbibing, they are alert, looking around like a gazelle at an African watering hole. What is remarkable is the mouse knows when to stop. So, yes, I can attest to the fact that mice do like an aperitif with their cheese nibble, but no, they do not oversip.  Could it be they are always on the alert for the ‘proverbial’ cat? 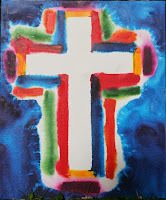 "Exhalation", acrylic on canvas, Henri van Bentum, 1977
Last Thursday, September 26th, we had a glorious sunny day here on the Pacific coast in our village of James Bay (in Victoria, BC).  We spotted a light/spectrum reflection caused by a crystal on our window ledge.  This visiting phenomenon moved, oh so slowly, over the floor.  I picked up the crystal and guided the spectrum over my painting "Exhaltation", making it dance over the artwork, which is also in Rainbow / Spectrum colours.  N. filmed the action with her mobile. CLICK TO WATCH THE SHORT VIDEO:  Enjoy this Dance of Light.