See our earlier blog posts about Paul and his amazing predictions, Meanwhile here's the story, from THE ASSOCIATED PRESS:

"BERLIN -- Octopus oracle Paul's prescience wasn't needed to predict how this one would turn out: His aquarium in Germany has given a resounding "nein" to a bid to move the celebrity mollusk to Spain. 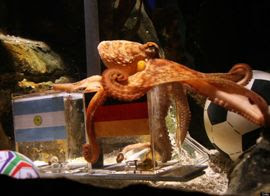 (note from Henri: here's Paul making his selection for the Argentina vs. Germany match)

Paul rose from obscurity in Oberhausen's Sea Life aquarium during the World Cup to international celebrity as he correctly called the outcome of Germany's seven matches in the month-long tournament, time and again picking a mussel from a tank marked with the flag of the would-be winner.

He also correctly predicted Spain would beat Germany in the semifinals -- prompting many in his home country to speculate how he would taste grilled in garlic butter.

Already a celebrity in Spain after the semifinal prediction -- Prime Minister Jose Luis Rodriguez Zapatero offered to send a security team to protect the 2 1/2-year-old floppy octopus from the hungry Germans -- the country went wild for him after he correctly tipped Spain over the Netherlands in the finals.

Paul is now so popular in Spain that a northwestern Spanish town tried to borrow him. Officials in O Caraballino, population 14,000, declared that the octopus is their "honorary friend" and wanted Paul's presence to promote a seafood festival, the Faro de Vigo newspaper said.

In response to hundreds of requests to bring Paul to Spain, the Madrid Zoo this week asked Sea Life if it would be willing to make a deal to bring him in as a tribute to the Spanish soccer team's victory.

"They brought the World Cup, we bring Paul," zoo spokeswoman Amparo Fernandez told The Associated Press. "He's a symbol of this championship."

She said the zoo had asked for Paul to come on either a temporary or permanent basis, and had proposed an exchange of animals. She said no financial offer had been made, but that it would be considered if necessary.

But Sea Life spokeswoman Kerstin Kuehn said there was no way it would happen.

"It's totally out of the question to sell Paul or lend him out," she said in an email. "Paul will enjoy his greatly deserved retirement in Sea Life in Oberhausen." "
Posted by van Bentum