Our local newspaper, the Times Colonist, puts out a call every year for readers to submit stories about their various Christmas experiences.  Ours was published last week, it's about when we lived on the beautiful island of Maderia, in the late 1970's.  There's a longer post about it here, which I wrote up a couple of years ago, with more photos and detail about our adventure.  Madeira is a lush, volcanic island, situated in the Atlantic Ocean, over 500 kms off the west coast of Morocco,   Here is a photo of the article (below), if you click on the image, it will enlarge. 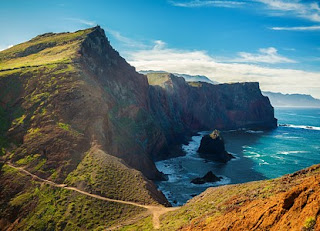 Read more about our 'memorable' Christmas in Madeira:
https://henrivanbentum.blogspot.com/2017/12/abadoned-at-inn-christmas-1977-porto.html


It’s been awhile since we posted something.  Not much happening when you’re 90, like me.  Aging slows you down, and makes the Riddle of the Sphinx in Greek mythology come true: “What goes on four feet in the morning, two feet at Noon, and three feet in the evening?” (The answer is: human beings.)

My daughter from a previous marriage will soon be 49.  She was raised in northern British Columbia, and lives in two places, in Terrace, BC and on Haida Gwaii.

To my surprise, she has taken up stained glass work.   A picture says a thousand words.  Here are a few of her creations.  The quality gave me an incentive to publish this post. 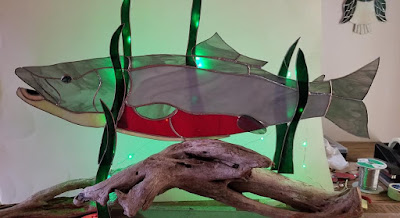 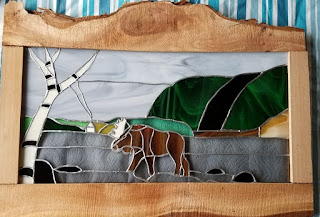 Maya in her studio with the King Salmon in progress 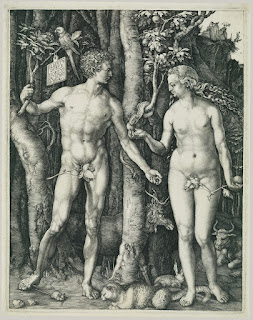 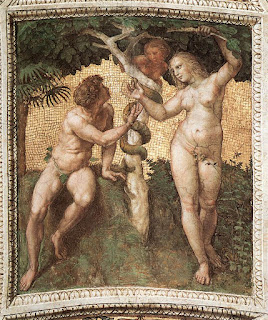 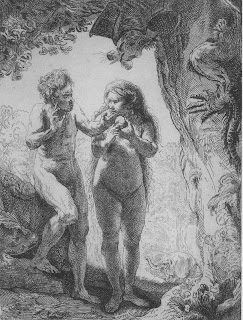 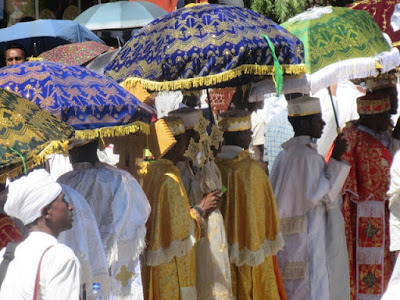 We continue sharing the experiences of our Canadian friend and global wanderer, and former neighbour in Vancouver-- Raymond, who recently opened a Lodge in the highlands of Ethiopia.  Fikir and Ray Lodge is located in Lalibela, an UNESCO heritage designated town.  The Lodge is providing a means of livelihood for many local young people.  See Part One (December 21st, 2018) and Part Two (January 9th, 2019).

Last week, on January 19th, Raymond and thousands of others participated in a unique, traditional event, a highlight of the Ethiopian calendar:  Orthodox Christians celebrated Timket, or Epiphany, which commemorates the baptism of Jesus in the River Jordan.

Although Timket is celebrated near a source of water, and has the city of Gonder as its pivotal point, Lalibela has a significant share of Timket ceremonies.   People come from all over other parts of Ethiopia, including the capital of Addis Ababa, and around the world.  We include here in this post some photos which speak for themselves. 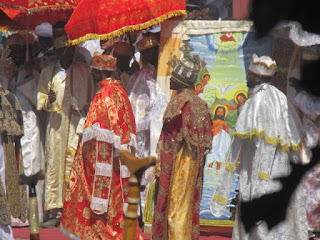 The highlight of Timket takes place when the Tabot (a model of the Ark of the Covenant that according to tradition contains the Ten Commandments), bound in cloth, is carried by the priests in a procession.

Higher church officials join the priests closest to the Tabot itself, but anyone is free to walk in the procession with the clergy, although at a certain distance. Orthodox students are dressed in white and blue.

A carpet is continually picked up and re-laid in forward fashion, for the benefit of the priests, and Tabot.  Everyone else, lay people, students, lesser levels of clergy, follow alongside.

Musicians playing traditional trumpets, or imbilta, lead the way. The instruments symbolize the description in the Bible that trumpets were played when the Ark of the Covenant was being moved.

Church leaders, dressed in their religious robes and carrying crucifixes and umbrellas, then followed.Timket is not celebrated inside the churches, but outside. 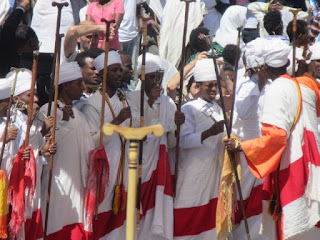 In Raymond’s words, the experience was an extraordinary one.  “The carpet expanding in front, while the procession moving forward, the priests, and Tabot, which was trailing behind large rotating circles of eager young men, who advanced in front ... the shrill cries of the women breaking out. And the exuberant, and spontaneous clapping (myself included) along with intense drumming, and singing.”

[With thanks to Raymond, of Fikir and Ray Lodge.]

Part Two: A Friend in the Highlands of Ethiopia - Lalibela during Genna (Orthodox Christmas) and upcoming Timket (Epiphany)

Continuing from Part One:  we are now ‘talking’ with our friend Raymond, who is in the Ethiopian highlands, in the holy town of Lalibela, almost every day, via the magical flying electronic carpet.  Our earlier post (Part One) described the new Fikir and Ray Lodge, located at 2,500 m (8,500 ft), just above Lalibela, a project funded in part by our friend and now providing livelihood for several young people in the community.


Each morning Raymond walks down into Lalibela to get his coffee at the local cake shop.  Along the way he meets local people on the way down, and back up.  As Raymond says in response to our comment about the photos having a feel of Biblical times, “Yes, something ‘Biblical’ about Lalibela, inhabitants of whom trace ancestries to Abraham. 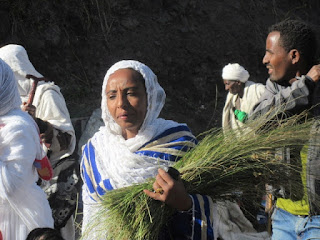 Lalibela is Orthodox, as well as most of the highlands, and to quote Raymond again,   "The people of Lalibela are extremely proud [not arrogant], as well as being easy-going and tolerant.  And who share hospitality, and friendliness, that is outstanding. They're the politest people I've come across. A people even using separate greetings, for everyone they meet. Depending on age, sex, status, or familiarity.

A generous, well as gentle folk. Which have found comparable to none. They're a people sharing nearly everything. Including their own children. Who also reflect incredible respect. Especially to the young, and to the old. And who tolerate nearly anything. Even resentments from other religions, or nationalities. 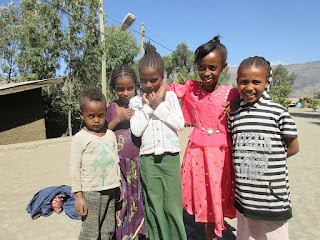 A few youngsters Raymond met, on one of his daily walks to Lalibela

Their diet alone, one of the world's healthiest. And fortunately the climate, also, is one of the best. And they're also a clever lot. Are very resourceful. Able to get by with practically nothing at all. Yet, rarely exhibit resentment, sadness, or true feelings.” 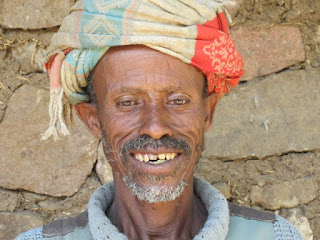 A resident of Lalibela 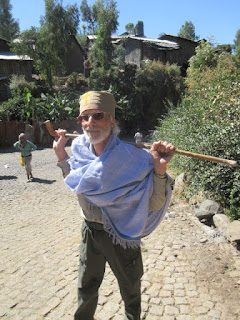 
This month, two very important celebrations follow one other in Ethiopia:  Genna (Christmas), which just took place on January 7th, and coming up next week, Timket (Epiphany) on January 19th, all according to the Orthodox calendar.

Genna (Christmas) marks the end Advent and 40 days of fasting.  On Christmas Eve, huge crowds gather in church services through the night, before celebrating with family and friends on Christmas day.
For both occasions, thousands of pilgrims come to Lalibela from all over Ethiopia, and elsewhere. 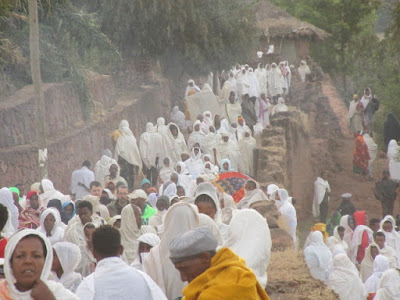 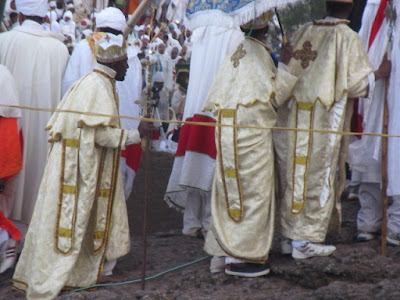 Timket (also known as Epiphany), is a re-enactment of the baptism of Jesus in the River Jordan by John the Baptist.  For Ethiopian Orthodox Christians, it serves as a renewal of their baptismal vows. It takes place over two days, and starts when the church tabot (replica of the Ark of the Covenant) is taken from the church to a nearby location, usually near a body of water.

We are told this ceremony symbolizes Jesus coming to the River Jordan.  The tabot spends the night in this location while the priests and other faithful hold a vigil through the night.  In the morning the water is blessed and is then sprinkled on the gatherers (or they may choose to bathe in the water), renewing their baptismal vows.  Long parades then carry the tabot back home to the church while the revelers sing and dance. 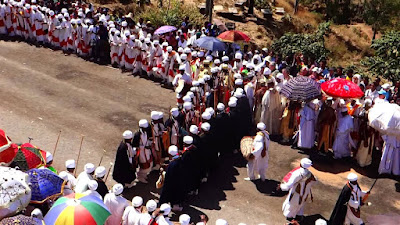 As we noted above, many of the photos reflect what could be Biblical times.  The only thing that brings us back to our current era is the fact they arrive via the Internet – making this long-distance dialogue possible.  It’s as if we are witnessing these daily experiences ourselves, he brings it all to life.

Which we share with our readers, whoever and wherever they are.