We continue with our South American adventure, 1969.

The rain turned into a downpour and half of our group in the back of the truck was soaked.

Two of the women and I got out and started hitchhiking, standing in the pouring rain on some road “from here to nowhere” with only the headlights on our truck lighting a few feet of the road.

After awhile, a car stopped.  We couldn’t believe it – a black Mercedes!  (They seem to love Mercedes in South America.)

A well-dressed gentleman opened the window slightly. “Que pasa?” he asked.  “What’s the matter?” It turned out he was the former Mayor of Guyaquil.

When he heard we were the hapless victims of the “Cristobal Carrier” he immediately became helpful; he had already heard of the calamity on the car radio.

Realizing we were stranded (again!), he said to get in the car, in the back.  I went back first to our group, huddled in the truck, that we’d be back, we were going to find some gasoline. No one believed us!  Small wonder.  Middle of the night, pouring rain, just coming off a shipwreck .. no way I’d return with the gasoline!

My companion in the back seat was a large German shepherd who growled at me until the Senor ordered “Calma!” He knew people who lived further up the highway and who might be able to supply us with some gasoline.

After a while the Mercedes stopped at a metal gate.

I was told to go and ring a long iron “cord” which needed to be pulled several times.  It must have been around 1 a.m. by now.

Finally in the distance two dim lights appeared. A native Indians appeared, looking almost Chinese. He carried a lantern, his long braid swaying in the wind. (No, I was not hallucinating!)

This gentleman was not amused someone had awoken him at this hour.  Then I pointed to the Mercedes and the fellow seemed satisfied.  He knew the driver.  I asked for some gasoline, and he slowly turned around and went back along the long path to his house.

It seemed like hours, but 15 minutes later he returned with a large yellow can, full of gasoline.  This is what I refer to as Miracle Number Three.

And so it seemed as if we had stepped into the twilight zone of some fairy tale.  We returned to the truck where most of the group was sleeping. 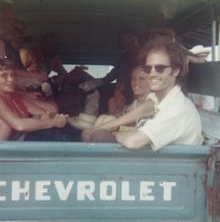 As soon as one of them spotted the can of gasoline gave a huge Hurrah! and applauded.  Not to mention the astonished look on the face of the truck driver!

My mentor friend and I carried on in the Mercedes and arrived at the Humboldt Hotel very early on Monday morning. 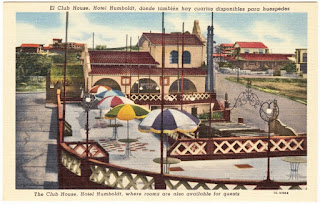 During our ride in the car, the radio was repeatedly broadcasting on the national news the disaster that had befallen the legendary ‘Cristobal Carrier’ en route to the Galapagos.

The former Mayor seemed to be pleased to have had a hand in getting us all safely back to the Humboldt Hotel.

Next:  the final Episode, coming up.