Once while in India, we experienced the Monsoon season. Remember it well. 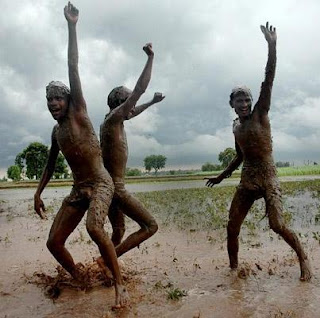 After a scorching hot and ‘blood-thinning’ month, the dark clouds and Monsoon rains came upon us.  This refreshing relief prompted us to rush outside, hold up our arms, dance and be merry with the villagers.  Something like Gene Kelly, “Singing in the Rain”.

What an enormous contrast to Pakistan with the current calamity and untold human suffering.  Some 14 million people are made homeless. A staggering number.  Mother Nature seems to be calling us to order.  Behave, or else!

The Gulf of Mexico oil spill disaster caused much damage.  Many who lost their livelihood brought their pets to their local humane society because they couldn’t feed them any longer. This prompted citizens from all over the USA to adopt the ‘orphans’. Some even let the animals fly First Class!  We humans are a strange breed. We go to war, and kill and even get medals of honour to do so. On the other hand when called upon, we’re ready to come to the rescue.  Only this week, 45 Chihuahuas were dropped off in our community by one woman (!) at the local SPCA.  (Not sure why she had 45 Chihuahuas but  that's another story.) Within 48 hours, thirty-three of these long-eared canines available for adoption had found new homes.