Episode Two of Five: Arrival in Guayaquil and Boarding Ship. Our Quest to the Galapagos continues . . .


We continue with the second episode in our Galapagos quest, 1969, in the port town of Guayaquil, Ecuador. 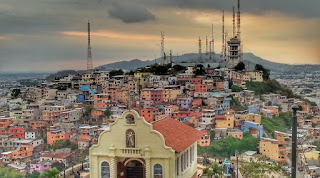 Our group all booked into the Humboldt Hotel.  The ship that would take us to the Galapagos was called the “Cristobal Carrier”. The vessel had been making the trip for 30 years and was an icon, a legend in Ecuador.

I went down to the dock to take a first look at the ship.  There we found an old-looking, wooden vessel painted a dull grey. There were not enough lifeboats.

In addition to our big group there were also many locals either returning to work or visiting family on the Galapagos.  They had chickens and all sorts of cargo.

Somehow I managed to have them load two dinghies which could serve as lifeboats. It was a Saturday and we were scheduled to sail at 17h00. 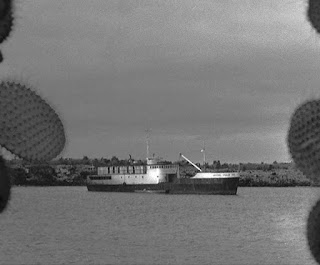 A rare-photo of our ill-fated ship, "Cristobal Carrier", 1969

Eventually we were on our way by 19h00.  There was much fanfare and shouts of “Adios!”. We lifted anchor for what was to be another routine sailing for the venerable ‘Cristobal Carrier’.  The upper decks were reserved for us.  All cabins had upper and lower bunks.

We were happy to be on our way to these enchanted “Darwin” islands, the world-famous Galapagos.I already mentioned our group was an eclectic one with artists, ballet dancers, architects, and writers.

We had a magnificent clear, starry night above.  Everyone’s spirits and expectations were in high gear and we’d all retired for the night.

In the middle of the night, it happened.  Boom!  I was thrown out of my bunk and was suddenly clear awake.  What on earth could that “boom” have been?

I made my way up to the bridge.  There was no one there.

The stars were glittering above in the clear sky. Turned out to be 4 o’clock in the morning.

We peered over the railing and had a shock.  It looked like we’d hit an island. The bow rested a good way up on the shore. 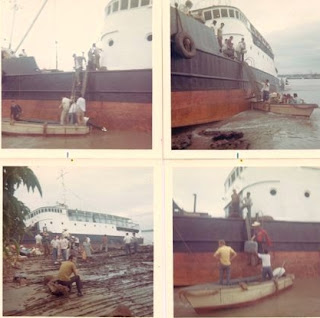 Shipwrecked! Would you believe it?  “Where is everyone?” we asked. “No captain, no pilot or officers on the bridge – in fact, nobody.”  The locals panicked.  Some women and children were crying.

The day began to break and now of course everyone was up and about. The “Captain” had left the ship and was sitting dazed on a rock with a bottle of rum in his hands, shaking his head.  He was a tramper captain, and could have stepped right out of novel by Somerset Maugham.  The members of our group didn't panic, but were more in a state of disbelief.

The ship started to list.  I went to get my passport and luggage, as did a few others. Just in time, for now the ship was really listing to starboard. 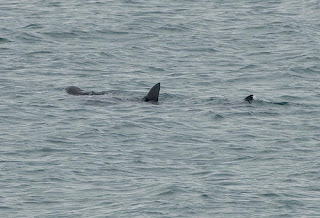 We got to the highest point of what turned out to be not a very high island. Children were crying, roosters were crowing. Altogether quite a consternation. Then we spotted some triangular-shaped fins in the water, telling us not to go out for a swim!

The radio man, the “Marconi man”, already had contacted the mainland and sent out a SOS for help.

Any hopes of seeing the Galapagos were now smashed.  But our journey wasn’t over.

Episode Three coming up next.