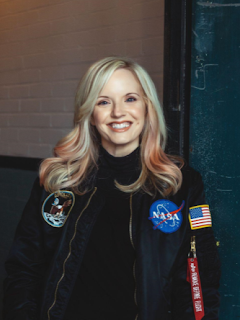 “Art and science are two flowers on the same cosmic vine. They are about curiosity, creativity. They question, provoke. They are thinkers, instigators. They can communicate, make meaning. Art and science, those gorgeous flowers, help us manage and understand the world around us.

As an artist and color master, Henri van Bentum captured light and life, creating something beautiful, a choreography of color and texture. As a visualization scientist for NASA’s Chandra X-ray Observatory, I translate the energetic multiwavelength Universe into something we can experience. We make visible the invisible.

Henri and his artwork first came to my attention during the United Nations’ International Year of Astronomy in 2009. His major opus, "Organiverse", became part of my "From Earth to the Universe" cornerstone project, with celebrations by the Royal Astronomical Society of Canada's Victoria Centre. 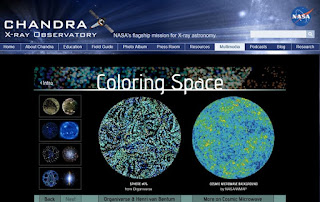 "Coloring Space", a collaboration between NASA's Chandra X-Ray Observatory (public outreach program) and Henri van Bentum, artist
Not long afterwards, Henri and I collaborated on an interdisciplinary sci-art project, an online exhibit juxtaposing some of his Organiverse Starry Night paintings with images of space. (See above example). This resulted in the creation of "Coloring Space" which is still viewable on the web site for NASA’s Chandra X-ray Observatory. 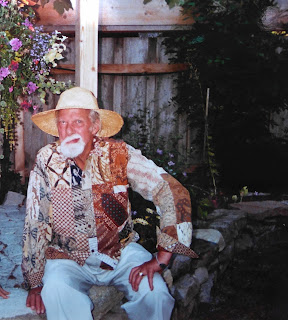 Henri van Bentum, housesitting on Pender Island, B.C.
Our journey through light together would continue. A few years later, when my colleague and I wrote a book called "Light: The Visible Spectrum and Beyond", we included a small selection of artists, among them, my favorite, Henri van Bentum, with his acrylic on canvas painting “Light Sprang Forth”.

More than that, I had found a friend in him, and Natasha, and we would continue to correspond, sharing parts of our lives, beyond the art, beyond the science. In Henri’s hands, the Universe danced.
I’m thinking of him now, invisible particles and all light, now all the flowers on all the vines, dancing through our Universe. Maybe I will capture a part of his light (and life) in my own work someday.”
___
You are invited to visit  "Remembering Henri van Bentum", a new landing page
featuring several existing, and legacy projects.
Posted by van Bentum No comments: