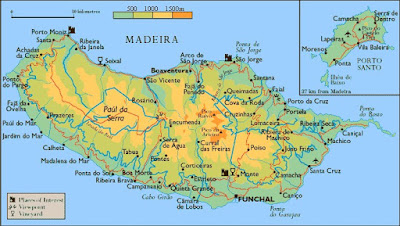 Map of Madeira – Porto Moniz is near the top, on the left

In the winter of 1977, Natasha and I were housesitting an estate, called “Quinta Santo Antonio”, located in the high hills above Funchal, on the Portuguese island of Madeira, 700 miles off the coast of Morocco. 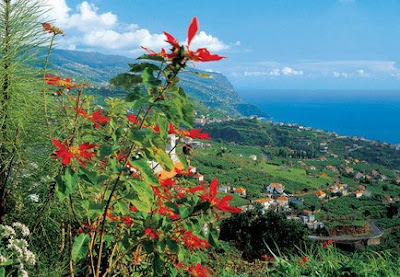 The view from “Quinta Santo Antonio” where we were housesitting

1977 was just three years after the Portuguese revolution, and in many ways Madeira was still a feudal society. Most of the population lived a simple life in the countryside, apart from a small number of aristocrats who owned 90% of the land.

One of these aristocrats became an acquaintance. His ancestors were founders of the island in the late 15th century and his name was Baron Martim Matos Noronha da Camara, or just “Martim”.

Martim asked if we’d like to experience something different over Christmas, since he knew we were keen on local folklore and traditions.

He suggested Natasha and I make a trip to the remote fishing village of Porto Moniz, on the far northwest coast of the island.

We took him up on it.  Having no car, and since no buses were running on Christmas Eve, we arranged for a car and driver.

Following a five-hour ride along a narrow road hugging the coast, with countless hairpin turns and precipitous drops, we finally arrived in Porto Moniz. We found the only inn of the village – the place where we’d made a reservation by phone – only to discover it was closed up.

The driver had already left. There we were, stuck. It was raining.

After knocking several times on the door, an ancient caretaker appeared and let us inside.  It was cold! He pointed to an old wooden table where a small plate of sardines and cookies had been left out for us  --- the only, seemingly forgotten, guests.

Then he left, locking the place up, with us inside, and the heating off!

At this point we wondered if Martim had played a big joke on us.  He was known for his unusual sense of humour.

The village seemed to be uninhabited. We thought it strange no one was about on Christmas Eve, the island being a very Catholic place in those days.

Then, from our window, we noticed some locals walking up the hill with lit candles, heading to church.  Soon it was a procession.

Around 1 o’clock in the morning, the locals started, what we later learned, was an annual tradition over the past few years – driving up and down the hill in trucks.

They were mostly young people, many standing up in the back of the truck, singing carols and local folk songs at the top of their lungs. This went on for the whole night.

There was a small radio in the kitchen, where we heard on the news Charlie Chaplin had died at his home in Vevey, Switzerland.

At noon on Christmas Day, the inn’s owner suddenly turned up, asking if we’d had a pleasant stay. What could we say? All we’d had was sardines, cookies and a bar of chocolate, and spent a very chilly night on our own. 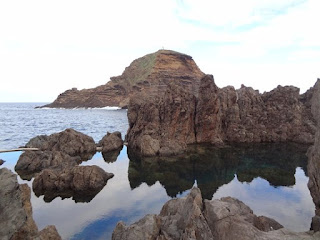 It wasn’t easy finding a taxi on Christmas Day, and the route back was almost washed out from recent rains.

Finally we arrived back at the Quinta in the early evening, after paying a double fare.  There we had hot meal, and opened a bottle of – Madeira!  At least a bit of Christmas joy was experienced.

Looking back, this was by far the most peculiar and unexpected Christmas we’ve ever had.