Paul the Octopus - yet more developments

More news about our amazing octopus, Paul the Oracle.  Another agent has now joined the gravy train for endorsements. This one resides in England and tells us children’s books are being written. 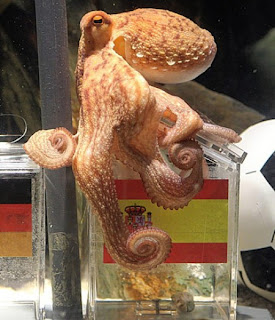 That’s what I predicted a couple of months ago, I was "right on the money", except I won’t get any royalties. (ho-ho)/ Also I predicted awhile ago for the coming Christmas season that toys would be manufactured about this oracle from the deep. Now we discovered there is a record deal in the works, "Paul the Octopus Sings Elvis".  What Elvis the Pelvis has to do with it, I’m not quite sure. Maybe because Paul’s 8 arms are flexible and can move in all directions.  Just like Elvis moved all over the place, “all shook up”.  Stay tuned for more on Paul, the amazing 8-armed clairvoyant.
Posted by van Bentum

Have been silent for awhile. With all those worldwide communication-gadgets on the market and in homes, telling us about all the “hot news” that’s out there, tomorrow’s happenings are already news today!

One thing’s for sure, however -  every day we are getting a bit closer to the Pearly Gates, so make the best of it. A news item that’s still unfolding by the day has kept my attention: in previous posts I predicted (long before he became a news item), that the renown would spread of Paul the 8-armed Amazing Psychic Octopus of World Cup (and Bundesliga) prediction fame.

Although Paul has now retired from predicting, he has begun to spread his fame and eight arms commercially worldwide:  like the celebrity he is, Paul now has an agent!

Already hundreds of endorsement offers have come in, expecting to bring forth millions of Euros and Dollars.


Here he is selecting a box with the name of a Germany supermarket chain, Rewe:

Saving Turtlles in Greece - but Paul has not forgotten his fellow deep sea dwellers.  One of his arms is intended to protect endangered TURTLES in Greece.  Funds will be set aside for this good cause. Here is one link to learn more about turtle protection in Greece.

Don’t ask me how I predicted Paul’s future fame, months before it happened.  The facts are there. Stay tuned for further multi-armed spreading news about Paul the amazing psychic wonder of the Deep.  That’s All Folks!  Henri