My Escapade with the Roma / Gypsies


Already there have been several responses to my recent article about the DNA ancestry test. (Click here to go to that post.)  Some are curious about my experience with the Gypsies (or “Roma” people), at the ripe old age of a two-year old toddler, an experience which gave my Mother grey hairs.

Well, here goes. In those days – the early 1930’s of the Low Lands – small bands of wandering Gypsies in caravans often came to our door, asking for water, and whether anything needed to be fixed such as pots and pans, or have knives sharpened.   We didn’t have running water, just a pump, although my grandmother had a well.

Others wandered the streets with a portable organ, or an organ on wheels -- always accompanied by a monkey. The monkey wore a suit and a red Fez hat. 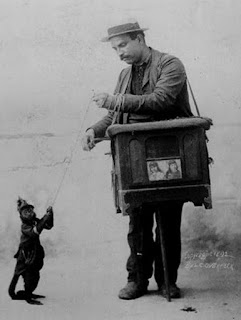 These organ grinders would also knock on doors, asking for pennies, if owners hadn’t already thrown them coins from an upstairs window. When they came to the door, it would be the monkey, hat in hand, begging for pennies. 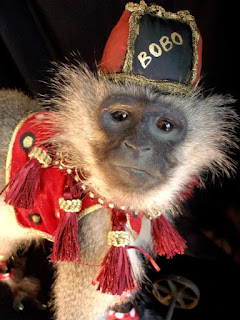 It was on such an occasion that Mother gave me a penny to give the monkey. I was two years old, and just able to walk, without falling over.  Mother was busy in the kitchen, and I simply followed the monkey and the Gypsy.  And landed in the caravan.

It was not a case of being kidnapped from our front door, more one of me following them. But of course this man who came to our door must have gone straight to the caravan with this 2 year old, blond, roly-poly, healthy little boy, who I’m sure was welcomed with the traditional open arms and passion of the Gypsies. Vaguely I remember the painted wagons and hearing violins and accordions.  But memories of faces or whatever happened eluded me.

I was gone for a long time, I learned much later. Here is how the Interpol and local police found me.  An uncle of mine (brother of my father), was a photographer.  It was then the fashion to make photos of newborns in their birthday suit lying on a soft sheep’s hide.   The photos were taken every year up until about the age of three to five. So my parents had several photos of me, one as a newborn then one at age one and age two.  The photo at age two was given to the authorities who circulated it everywhere.

Here is the very photo Interpol used to help find me.

Six months later, I was spotted when the caravan crossed from Belgium into the Netherlands.  Healthy and strong.

And that’s how Mother’s hair became grey from worry, and how I was rescued.

Father was a peace-loving man, and did not lay charges against the Gypsies, so they were not punished.

Now, eight decades later, I still wonder if these wandering people transferred their nomadic spirit and nature to me, since I’ve had a great love of travel and adventure all my life. One thing for sure, I love gypsy music. 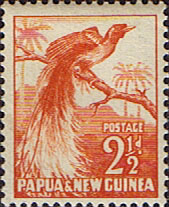 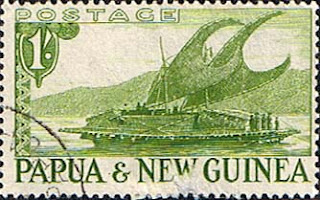 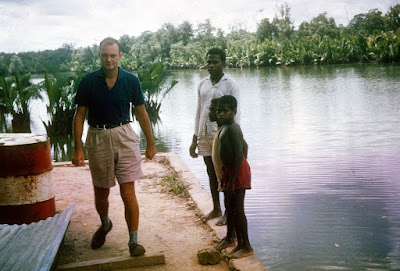 Also the Dutch Reformed Church (DRC) was always looking for missionaries and for young doctors who they would sponsor, like a scholarship. The DRC missionaries had been active in many countries around the world, for centuries.  For example, they established a church in New Guinea (now Papua New Guinea), already back in 1640.  Piet applied and trained to become a doctor.

During this time, cousin Piet visited me while I was in a tuberculosis sanatorium called Zonnestraal (‘sunbeam’), near Hilversum.  After I immigrated to Canada, we corresponded in the 1960’s by mail.

After graduation Piet married, and in 1962 was sent far, far away to a remote region of New Guinea -- to the highlands at Ajamoeroe. There he worked amongst a tribe that until recently had been headhunters and cannibals. 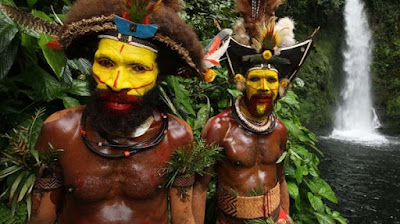 It was wonderful to receive letters from such an exotic place as New Guinea; even the envelopes and stamps were a source of wonder not only to me but to others in Toronto.

During a cold Canadian winter, I often imagined Piet over  there in New Guinea.  His letters brought things to life from that far-away place. As an artist, I lived a nomadic, bohemian life and had at least twelve different addresses in three years, so sadly I no longer have Piet’s letters.

In New Guinea, Piet travelled around to various places with other doctors to gain experience.  In his letters, he described being there was “like living at the dawn of time”.

Dr. Piet set up camp and a clinic in the highlands.  (A hospital had been established in Biak, the closest town.)  His ‘patients’ had no currency as we know it.  Their culture was based on the barter system. The most valuable currency was piglets, and also shells such as Kina or Cowrie shells. 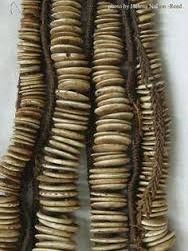 Kina (and Cowrie) shells were a form of currency. Here you can see shells that have been cut and made into a necklace.

In this way, the young van Bentum couple experienced the barter system. One of Piet’s patients gave him a skull in exchange for treatment.  It had been the head of an enemy warrior.  Piet realized this skull was a valued object, and the patient instructed him with gestures that he was to use it as a pillow. (!)

One day, another patient came with an arrow sticking out of his chest.  Dr. Piet carefully removed it, and told the man to stay at the clinic for a few days until the wound had healed.

Next morning on his rounds, Dr. Piet noticed his native patient had disappeared. But three days’ later, the man arrived back -- with two piglets -- as payment.  He pointed at his chest, which had already healed, and gave Piet a big grin. 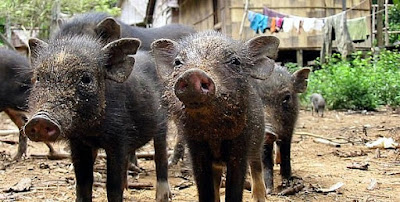 Several of the tribesmen had injured their genitals due to ‘accidents’ with the penis sheathes they wore, which gave Dr. Piet a lot of extra work. All the while, there were still skirmishes and fighting between tribes, mostly about piglets, land or women.   However, there was no more headhunting or cannibalism.

During this time, the young couple became parents to a boy, Carel, who was born in Biak.

Then, the Indonesian government declared that all citizens of the Netherlands had to leave New Guinea.  Mrs. van Bentum and her new-born son travelled back home, and Dr. Piet stayed on a while longer.

After New Guinea, Piet returned to the Netherlands, where he took extra training in surgery.  A second son, Pieter Jr., was born during this time.

But in 1964 Piet was off again:  this time, posted to Cameroon, Africa to do the same thing, provide his services as a doctor.  Piet worked in a hospital where he also  made use of his newly-acquired surgery skills.  There, in Cameroon, a third son, Floris, was born.

Stamps from Cameroon
After three to four years (in 1967), they returned to the Netherlands via freighter. The ship’s cargo was African wood.  The freighter caught fire and the van Bentum’s were transferred to another vessel, homebound.
On one of my visits to the Netherlands, Piet showed me his collection of artefacts from New Guinea and Cameroon.  Already back then, I suggested that he write a book about his experiences.  But he didn’t seem keen, shrugging his shoulders and saying “not important”.

All these experiences in both New Guinea and Cameroon enriched Piet van Bentum’s knowledge of tropical diseases, and gave him a unique set of skills.

In 1967-68, Piet was a GP, in Utrecht.  Then, he applied for a position as an instructor for young international doctors at the renowned Royal Tropical Institute in Amsterdam (Koninklijk Instituut voor de Tropen /KIT. ) Piet van Bentum worked there for five years.

In Groningen, he became Director of the south-west Groningen Geneeskundige Dienst (GGD), [“Groningen Medical Service”], serving for six to seven years as medical advisor for sixteen districts. From Sneek, they moved to Veendam, where Piet also worked for the “GGD” as manager/doctor, but for the north-east district of Groningen.

Piet really loved sailing. He had a sailboat, called “The African Queen”.  He also kept bees, for honey.

Piet was one of a kind.  As I mentioned earlier, I often encouraged him to write his memoirs, but he never did.  I don’t know why, for he had so much to tell us all.

He retired in 1993 and moved from Veendam to Frieschepalen.

Piet van Bentum was a happy family man, had a great sense of humour, and was a true humanitarian. Piet recently went ‘over the horizon’, in his sleep, on January 1st of this year.  It is in his memory that I compose this blog post. 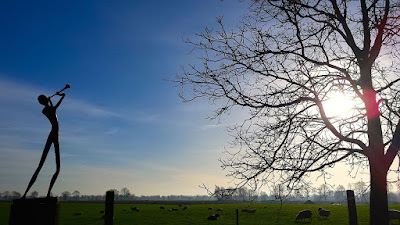 A picture of the “Tuinfluiter” in the garden at Piet and Wimmy’s house. Piet loved this spot, where he admired the peaceful landscape of Friesland.