Poinsettia Trees in the Caribbean

We belong to a club here in Victoria. Mostly because of our interest in billiards and snooker.

The club has three professional-quality billiards tables. Snooker requires concentration, awareness, decision-making and mental mathematics, and creates a fellowship amongst other aspects. The aficionados play regularly, not only for the joy of it, but many play to compete in tournaments. (Plus, it’s good exercise, mentally and physically.) Both Single and Double tournaments are held throughout the year.
I am a novice, with a handicap of +25. Recently a friend of ours, a very good billiards player, created a new game called Zen Billiards. Last weekend a visiting club from another city came over for a big annual tournament, Doubles on Saturday and Singles on Sunday. Both tournaments were won by the visiting squad but Victoria put in a fair show. (I was a spectator in the gallery.)
But hold on, we’re getting side-tracked here.
Yesterday when visiting the club, we noticed two sentinels from the Nutcracker Suite standing at the entrance, while indoors more glimpses of the “Ho-ho” season could be found, gnomes sitting atop mantelpieces and other Xmas decor or pixies on shelves. The decorations are elegant, not the usual sort of ‘tinsel’.
No sign of the traditional Big Tree yet, or the neat rows of bright-red poinsettias, stationed neatly on the steps of the main stairwell. Yet, these harbingers signalled loud and clear the Holiday Season is upon us. Following a couple of rounds of snooker, I rested in the spacious reading room, while Natasha did some computer work in the Business Centre. In between resting, slumbering and resting (yes, it’s that kind of Club where in the old days only gentlemen could be found snoozing behind the daily paper, a la “Drone Club” of Wodehouse fame),

I was transported in my reveries back to the Caribbean one year ago. At that time I was guest artist aboard an ocean liner, the QE2.  We’d called on Dominica, a beautiful and lush island. It was December, and while exploring the island, we noticed everywhere tall poinsettia trees, glowing with complementary red and green colours. 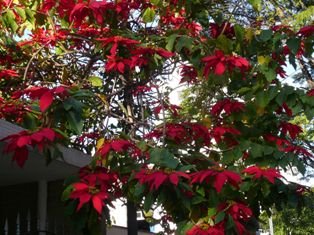 Throughout the Lesser Antilles, in the sweltering heat and humidity, at each port of call shops were overflowing with ‘snowmen’, Santas with reindeers and snowflake decorations on windows and doors. “Have you ever seen snow?”, I asked one of our guides. No, she hadn’t , but she knew all about mistletoe, holly and that famous reindeer with the red nose, Rudolf.
Not only in the Caribbean, but in December throughout Central and South America in tropical regions, Santa rules.
But what is all this “Ho-ho-ho” all about, which gobbles us all up into commercial temptations and deck halls?
How did those three kings, those three wise men, know a Saviour was born? From the stars, we’re told. Yes, there was the star above Bethlehem. And shepherds, who as the story goes, were told by an angel to go 'towards the bright Star shining in the East, for there in Bethlehem in a stable, the Saviour was born.' All well and good for those wise Men, they were star-gazers, ‘studiers’ of the constellations, or astrology. I wonder when people sing their Xmas carols, if they have any idea what it was that led the three kings to the saviour?
And what about the iconic Christmas tree. Do conifers and pine trees grow in the desert lands? Date palms, yes. Cedars of Lebanon, yes. As most people now, our Christmas tree goes back a long way, to pagan and Druid times. The time of the Winter Solstice, the return of the ‘newborn’ Light. Enough said for now. I’ll just go and wonder, wander and ponder some more. Ho-ho-ho! Henri
Posted by van Bentum