An Impromptu Visit to "Machu Picchu"

Here we are again. Yesterday we received a question from New Zealand asking if I’d been to Machu Picchu in Peru. Yes, I had the good fortune and privilege of seeing this ‘new’ one of the Seven Wonders of the World. It was 1969, the aftermath of yet another shipwreck. A group of us were en route from Guayaquil to the Galapagos or “Enchanted Islands” aboard the “Cristobal Colon”, an icon in Equador. After only ten hours’ sailing we hit an island (not an Enchanted one!) This abruptly ended our hopes of getting to Galapagos. [No, I am not a subscriber to shipwrecks, I've only experienced two from multitudes of sea voyages.]
It would be another 20 years before I got to the Galapagos, on a dive-snorkel expedition with Valerie and Ron Taylor. However the Galapagos shipwreck opened up another adventure waiting in the wings. What’s good luck, what’s bad luck?In Guayaquil a ship was heading for Gallao, Peru. Some of our group got tickets. In Lima we boarded the “Tren del Sol” to Huancayo high up in the Central Andes. An amazing feat of engineering. (The train carried oxygen tanks.)From Huancayo by bus to Cuzco, "the navel of the world", where we explored the region, then onwards by another train to the station (at 2,000 m, 6,000 ft) nearest to Machu Picchu. This was 1969, no five-star hotels, no ‘conveniences’ for tourists. From the station we had to hike up to this great ‘city’, located at 2,400 metres above sea level (7,875 ft) and perched on a mountain ridge above Urubamba Valley. 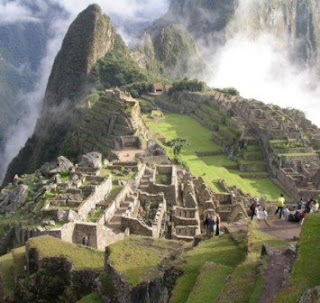 The setting of this terraced settlement is awesome. Aside from the feat of constructing something at this altitude and location, Machu Picchu was a city of an advanced Inca civilization.

The ingenious irrigation system is an engineering wonder. (Later, far away, we’d see a similar system of levadas on the Portuguese island of Madeira). Not to speak of actually practicing agriculture on those steep mountain slopes. We had already seen the massive granite blocks at Cuzco which look as if they’re cut from cheese with a knife.
They fit together in such a way you can’t even put a razor blade in between. Another enigma. Seeing is believing. Being there is what counts. Different from reading about it or seeing a documentary on TV.
When our group left to return to Cuzco, I remained at Machu Picchu and decided to spend the night, camping out near the ancient Sundial at the Temple of the Sun. It was an unforgettable night, and full moon. (When the Sun goes under it’s cold up in the Andes. No wonder they worshipped the Sun.)
During my vigil that night, I encountered a remarkable event: after the visitors have left Machu Picchu, a man (who is descendant of the Incas wearing traditional Incan attire), strides briskly around the site, chopping away the foreign spirits with a machete. While doing so, he utters incantations in Cetchua.
Next morning, I continued on with my travels by train, to Puno at Lake Titicaca, the highest navigable lake in the world. There I boarded the ancient vessel “Oleanta” and crossed Lake Titicaca by another moonlit night, to Bolivia. But that’s another story. Adios, Henri
Posted by van Bentum