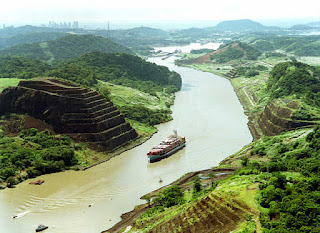 Panama Canal (April 19) – this was our fourth time going through this amazing engineering feat with its series of locks that make it possible for ships to get from one ocean to the next.  The Panama Canal is actually a “bridge of water”. 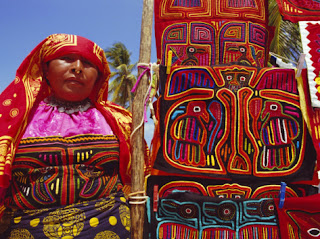 Kuna woman of San Blas (Panama)
We found a good spot in the cool Crow’s Nest on Deck 12.  It took us about seven hours to get through all the locks, nine if you count the time the pilot is on board. Before entering the Panama Canal, we presented the Captain with a photo taken of the Panama Canal from the International Space Station at 375 kms. above the Earth by my fellow Circumnavigator Club member, Commander and Canadian astronaut Chris Hadfield. 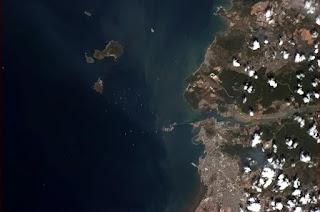 Foto of west entrance Panama Canal from space (tiny dots are ships waiting their turn), taken by
Commander and Canadian astronaut Chris Hadfield aboard International Space Station.
In turn Captain Albert Schoonderbeek invited us for “cocktails”.  I put cocktails in quotes, because during his tenure he doesn’t drink. 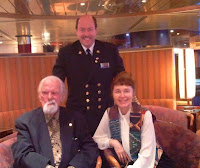 Captain Albert Schoonderbeek with Henri and Natasha
The Captain said there is a ½ hour leeway for latecomers when we asked how often he has to leave passengers behind at the dock. If departure is stated as “16h30 all aboard”, he can wait until 17h00.  He’d only stay longer if one of the shore excursion groups was late. Otherwise the gangway is lifted, ropes are untied and any late passengers are left behind. But it happens only rarely. Later in another blog post, we will include some quotes from the Captain’s own blog. 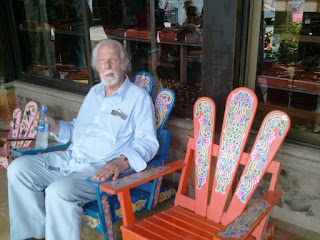 
Puerto Caldera, Costa Rica (April 21) –  31o C.  We opted for a folklore tour, travelling through lush countryside for a couple of hours.  Costa Rica is very green in more ways than one, with an awareness and keen focus on the environment. 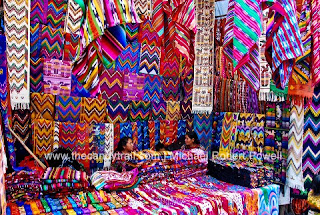 
Puerto Quetzal, Guatemala (April 23) 32 o C.  We travelled to Antigua, the UNESCO World Heritage city of Mayan origin.  On the way to our bus we were blinded by the psychedelic colours of the woven textiles, rainbows of colour everywhere. 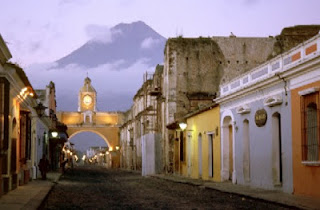 Antigua is a cobblestone city.  They recently re-discovered jade nearby.  Royal jade was the noble stone of Mayan kings and queens.  We visited the Jade Museum in Antigua. 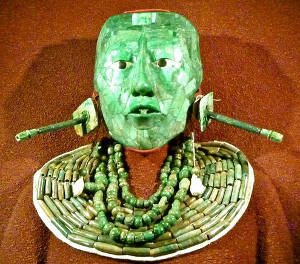 The nobles were buried covered in Jade

Puerto Chiapas, Mexico (April 24) – 30o C.  You can see the connection with Mayan culture here in Chiapas and links with Guatemala. Many pyramids to visit, more evidence of the Mayan era. 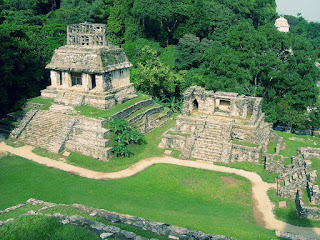 
We’re back from our memorable 3 week voyage of Creative Exploration from Florida to Victoria. First port of call out of Ft. Lauderdale was Bonaire, one of the “ABC” isles in the Netherlands Antilles.  They are: Aruba, Bonaire, Curacao.   But actually, from a geographical point of view, they are either “BCA” or from the other direction “ACB” islands.   In Bonaire, we visited the volcanic formations of this island that is covered with Aloe cacti. 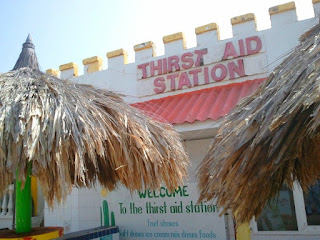 
Next up:  Curacao, and its capital of Willemstad, with its amazing moving pedestrian bridge that lets tugboats and other boats go through. One button is pushed to close the bridge for pedestrians, the other button is pushed to move the bridge diagonally. Imagine this:  it moves the whole bridge sideways.  Curacao is famous of course for its orange liqueur and Willemstad for its pastel-coloured houses.  We were there 2006, but now we’ve visited all 3 islands. 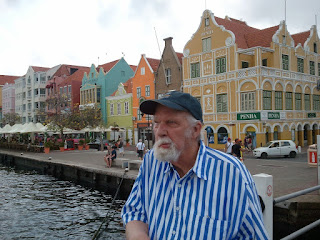 Henri on the pedestrian bridge that moves sideways, Willemstad, Curacao

Last of the three islands was Aruba.  We visited a “Flutterby” sanctuary where dozens and dozens of tropical Mariposas, Papillons, fluttered around us in a lush garden. 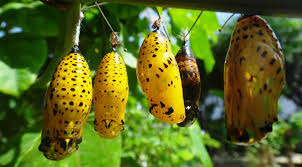 Their amazing life cycle from egg, larvae, caterpillar, pupa, crysallis to the wondrous flutterers, was there for all to see. 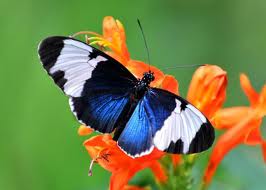 Ahoy - if you've been wondering the "no-show" lately on our blog, it's not because we have nothing to submit.  Au contraire.  We've just returned from a memorable Creative Exploration voyage including the ABC islands in the Netherlands Antilles (Aruba, Bonaire, Curacao), Panama Canal transit, Costa Rica, Nicaragua, Guatemala, Chiapas, Hualtulco and had the pleasure of stepping off the ship right at our doorstep in Victoria.  A ten-minute walk from ship to home.  Signing off for now, Henri