Having glorified the galaxies and 'cosmic dance', let us not forget we are involved in this dance too. So let us also not lose sight of a high priority,
healing and protecting our Home Planet.

For 28 days, the whole month of February, the “human family” could feast their eyes and imagination on a Journey into Outer Space here in Victoria at The Bay Centre, a large mall.
Seven large TV screens, courtesy of SONY Style, displayed images of the cosmic realm and our solar system phenomena, featuring photographs captured by Hubble, the Hawaii Canada France telescope, Mars rover, Voyagers and many others. Also the show featured photographs by amateur astronomers.
It all came under the umbrella of celebrating the 400th anniversary since Galileo Galilei probed the heavens with first use of the telescope. 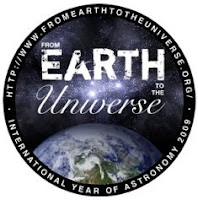 This year is International Year of Astronomy 2009 with events taking place all over the world. It’s a joint project of the International Astronomical Union and UNESCO. The exhibit was called “From Earth to the Universe”, one of the cornerstone projects of IYA2009.
We have here in Victoria a diligent and devoted group of astronomers based at the National Research Council’s Herzberg Institute of Astrophysics (NRC/HIA) which added to the show an extra vitality. Garry Sedun, who works at the NRC/HIA, produced all the videos to create the show. Natasha succeeded in bringing SONY Style and The Bay Centre on board.
Also we have in Victoria an active chapter of the Royal Astronomical Society of Canada, whose members volunteered at the exhibit three days a week. And our friend Brian W. Johnson was very helpful too. 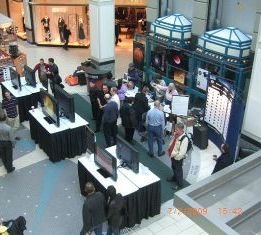 Of the seven TV screens, five were devoted to the astronomical images of stunning, dazzling beauty. (Some of these images, for me, echoed Abstract Expressionist paintings of the fifties and sixties, long before space photographs became available to the public.)
One screen featured artwork by Greater Victoria schoolchildren, showing how they depicted ‘outer space’, along with First Nations symbolic impressions of the cosmos. The other screen was entirely devoted to my opus magnum, “Organiverse” series. 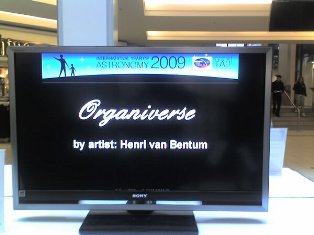 Organiverse is a collection of 100 paintings (the originals are small, just 8 ½ cm in diameter), all done in pointillism, dot-by-dot, atom by atom. They were created when we lived in Morocco and Madeira in 1972. Alternating with digital images of Organiverse was the “Starry Night” version of Organiverse. The latter were made possible due to state-of-the-art advances in computer technology.
The public had a chance to forget their daily worries or preoccupations with the mundane by bathing their eyes and minds on the perpetual imagery presented on the monitors.
The Red dwarfs, the supernovas, the birth of stars, glimpse of Jupiter and Mars, nebulae, in short a true journey into the nearest and farthest realms.
Being part of this unique presentation with my “Organiverse” series was a humbling experience.
Talking about humility and feeling small . . on several occasions I mentioned to visitors at the show that it was even more amazing (after seeing the eclectic, cosmic dance) to realize that our home, spaceship Ocean/Earth, speeds through the Milky Way at a mere one million kms per hour, which many received in disbelief, and as a shocking revelation, while a few were in awe and wonder at this reality.