Our posts of Aug 25 and Sept 2 (see below) on the art, history and plight of the Huichol have generated several questions.  One visitor from Thailand asked if we could elaborate on how we met the renowened Huichol shaman and artist, Jose Benitez Sanchez, who went ‘over the horizon’ in 2009. 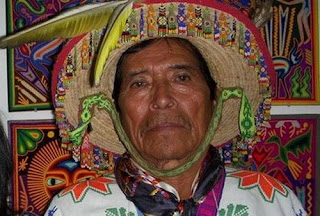 We’ll gladly respond to our reader in Thailand. Other people may be curious too. For many years we spent each winter in Mexico (N. would be there for December and January). We stayed with a dear friend, now deceased, at her hillside home “Marlinda” in Conchas Chinas, south of Puerto Vallarta in the State of Nayarit.  One side of the living room and kitchen had no wall or windows, but was completely open and and looked out over jungle and the Pacific. 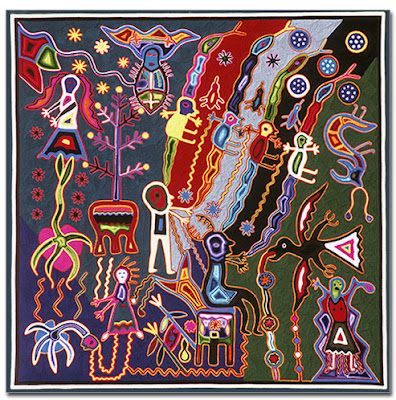 Ancient Spirits Rise to the Surface of the Earth, Jose Benitez Sanchez
On these trips I’d sometimes bring along a few laminated (to protect against the high humidity) reproductions of my "ORGANIVERSE" paintings, an opus comprising 100 individual or spheres or mandalas each done dot-by-dot in a pointillist technique.  With a diameter of only 8.5 cm, the creation of “ORGANIVERSE” was a marathon of patience and precision. 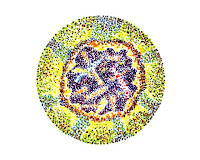 By the time of this particular visit to Mexico, we’d known about the Huichol for over ten years. There was now a gallery that featured works by Jose Benitez Sanchez, the Shaman and master artist we talked about in our earlier posts. (By the way the Huichol language had no  word for “art” or “artist”.) 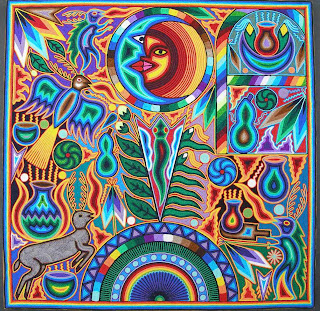 Title Unknown, Jose Benitez Sanchez
Early one morning on our way to town, on the street where that Huichol gallery was located, walking towards us was a dignified and interesting-looking man.  His attire told us he was Huichol.  We said “Hello” and with gestures indicated we were headed to the gallery.  He joined us and introduced himself, Jose Benitez Sanchez.

Jose Benitez Sanchez
That morning, “coincidentally”, I was carrying a couple of the laminated "ORGANIVERSE" reproductions.  Jose Benitez Sanchez asked to see them.  He studied the prints intently. Immediately, language or any other barriers were broken. It was as if we had been life-long friends. He observed the dot-by-dot technique and with gestures made it clear he could see similarities between the patience needed to apply strands of yarn on his paintings, and the creation of "ORGANIVERSE".

I was honoured by his response.  See our earlier post (Part One, Aug 25) to view the autographed photo he gave me. So, through time and place, and synchronicity, the bond was created between his amazing yarn paintings and my pointillist images. We met again on a few more occasions, and that’s how our connection was born. 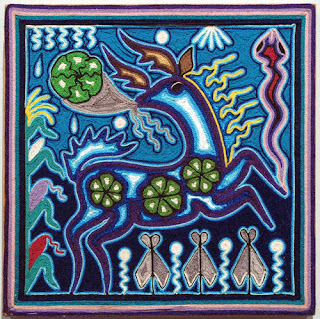 Our Elder Brother Kauyumari in the Time of Rain, Jose Benitez Sanchez
Let me add that sadly the Huichol culture and way of life is under siege.  The sacred grounds in the region of San Luis Potosi (which for centuries were the destination of their yearly pilgrimage, where they collected peyote cactus for their healing and spiritual well-being ceremonies) are now threatened by a mining and logging. 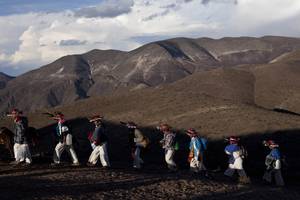 Huichol trekking to site of mining in their traditional territory of Wirikuta
near Real de Catorce
Despite the fact the region has been designated by UNESCO as a world biodiversity reserve, these practices continue.  Aquifiers and ecosystems are under siege. One of the culprits is a Canadian-owned silver mine. The methods used to get at the silver include us of dynamite, mercury and cyanide, are so destructive, that soon – nothing sacred will remain of this traditional territory.  Nor of the treasured and blessed healing and religious ceremonies. All the more reason to protect the Huichol culture and their symbolic messages, so joyfully and intricately expressed in the yarn paintings of the late Jose Benitez Sanchez, a master and respected Shaman. 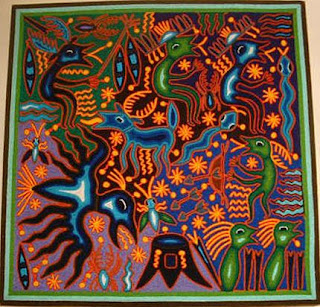