A week ago I made my 81st orbit.  Speaking of “orbit”, it was a gratifying experience to see on Wednesday the Chandra X-Ray Center (NASA)
launched a special feature on its website, a fusion of art and science called “COLORING SPACE” with work from my "Organiverse" Starry Night edition (original paintings are just 8 1/2 cm. in diameter (3.3").  Micro and macro cosmos.

What is Chandra? 'The Chandra X-Ray telescope is an orbiting observatory that reveals the most detailed x-ray view of the universe.  Since its launch on July 23, 1999, the Chandra X-ray telescope has been NASA's flagship mission for X-ray astronomy, taking its place in the fleet of "Great Observatories."'  You can also see lots of fascinating detail about Chandra on NASA's website page "Exploring the Invisible Universe" here.

COLORING SPACE juxtaposes images from NASA-operated satellites taken between 1998 and 2008 with a selection of pointillist spheres from my ORGANIVERSE Starry Night edition.

The project is intended, as the people at Chandra say, “to provoke thought about how the two realms of color - in art and in space - intersect and diverge. This piece explores the similarities of how these different types of images are made, as well as discusses the ways in which they differ. We invite you to explore these images and what they represent both on their own and when presented as a comparison, or contrast, to another in a separate field.”

The original series of 100 Organiverse paintings (or “Helios” edition) was painted on watercolour paper - - - dot by dot, atom by atom. There are four spheres per folio, for a portfolio of 25 pages.  This was done back in 1972, long before the Internet, or even fax machines. Since 1972 there has been a phenomenal evolution of electronic intelligence, of computers and software gadgets. Yet my original intent in creating Organiverse was for the viewer to view (on paper) one sphere at a time, quietly, for contemplation and meditation.  This motivation has now been overtaken by technology.


Yet it's interesting, even three decades ago, there was foreshadowing of links, a harbinger  between science and space, art and science, when filmmaker Julius Kohanyi was commissioned to create an experimental 35mm colour and sound film based on Organiverse.  (Also, already in the early 1960's, long before the moon landing any any NASA images or Chandra , I gave lectures and one of these was called "THE INVISIBLE MADE VISIBLE" More about that in another post.)


When it came time to give the completed film a title, Kohanyi wanted to use only a symbol: the two circles at the top left corner of this picture: (if If it looks familiar, this is from the plaque installed aboard Pioneer 11 spacecraft in 1973). 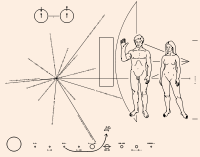 However, he was told a symbol alone wouldn’t “work” for cataloguing the film, so Julius had to give it a name, and he chose “H-A” (for Hydrogen Atom, the first building block of the universe.)


Creation of the “Starry Night” edition  - the Starry Night edition of Organiverse was born from curiosity.  In the early 2000’s, I was collaborating with Hewlett Packard (HP) who graciously agreed to scan the complete original Organiverse series using their latest scanning technology. When all 100 scans were completed, I asked the HP expert, Allen Rothwell: “Can we create a negative from the positive?” And the rest is history, as they say.  Recent developments - In the past two years, first with the recent International Year of Astronomy 2009 “From Earth to the Universe” exhibit which included both the Original and Starry Night editions of Organiverse on video,  and now with this special feature created by the Chandra X-Ray Center, Organiverse has taken on a life of its own.

Speical note re: "From Earth to the Universe" FETTU  - I would like to thank the volunteers of the Royal Astronomical Society of Canada VICTORIA Centre who made possible last year's FETTU exhibit, and a special thank you to Garry Sedun and Joe Carr.

Although we keep a strict copyright on the work, in a way Organiverse is now "out of my hands” so-to-speak, and has orbited beyond my original intent, as said earlier: that is, for people to quietly, contemplate the spheres individually as an antidote to our multi-tasking and over-stressed times.  It was the Starry Night edition of Organiverse that caught the eye of staff at Chandra. A very special thanks to Kimberly Arcand Kowal for all her work on the project.


We wish Organiverse and Chandra X-Ray Center a healthy and constructive orbit over the "Human Family", bringing - we hope - wonder and nourishment for the mind. 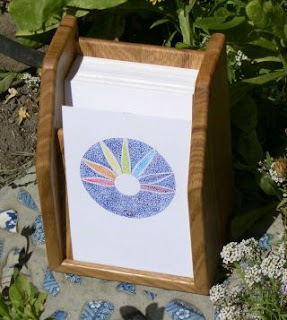 ORGANIVERSE HANDSET project - in keeping with its seemingly endless evolutions, yet another initiative was born.  We thank Brian W. Johnson of Victoria, BC for his help in working with me on colour callibration of the scanned spheres, and also in developing the concept of having the images housed in a striking and innovative wood container made from recovered Westcoast wood.

These handsets are available and we invite you to read more about these unique sets here.