‘Tis the season! It’s still snowing here in Victoria, very applicable for Yuletide. Eat, drink, be merry. Everywhere people are visiting friends, going to parties and enjoying traditional dishes and mouth-watering treats over the holidays. But have you ever wondered how Indigenous peoples survived and what their diet was during the long, cold winters of North America? Or, in places like Russia and Scandinavia?

Not only wondered at their survival in freezing temperatures (and surviving they did!), but marvelled at their rich knowledge of flora and fauna?
Speaking of special dishes, when you’ve travelled and seen a bit of the world like we have, you not only encounter ‘primitive’ food markets but enter a time-tunnel and see how things used to be for all of us, long ago.
On these expeditions you need to adjust and adapt to the local food, e.g. sometimes a local delicacy such as in the Atlas Mountains of Morocco, sheep eyes in couscous. Or with the Massai of eastern Africa, where I drank “cocktails” of milk and cow’s blood, and elsewhere in Africa munched on fried termites. 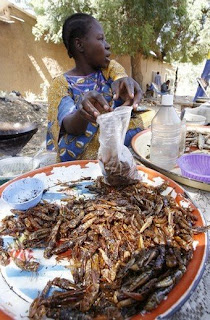 [In order to survive, in my boyhood in the Lowlands during WWII we lived on potato peels and flower bulbs, or roots of non-toxic plants. Hunger always triumphs over ‘revulsion’. I know! When some people here in the West say they’re hungry, they mean they have an appetite; many have never experienced real hunger.]

Speaking of markets in far-away lands, if you live in a city in North America you may have a Chinatown. In which case there’s no need to travel to Timbuktu or Harar, Ethiopia to come across foods which for us may be unappetizing.
Here in Victoria’s Chinatown there’s a vast selection of traditional foods, often dried or in powder, as well as many (the so-called aphrodisiacs) which deplete our global rhino, bear or shark population, just to name a few. Of course many nations have been on protein-source diets which we may find unpalatable (such as dogs, considered a delicacy in some parts ofthe Far East.) Recently in the Mekong valley forests, another source of protein was discovered: a spider, the size of a dinner plate.

Going back to those long, cold winters, what were the food sources for Indigenous peoples? Of course there was meat preserved from the hunt, wild fowl, or smoked and dried fish from the oceans and rivers.
Any plant life that could be, was dried, or roots gathered or cultivated (like the primordial carrot which the English call “Queen Anne’s Lace”). There was great knowledge of berries, innocent and not-so-innocent plants, toxic and non-toxic, healing and medicinal ones, plus how to find much-treasured honey. There were smaller forms of Maize, and other earlier versions of what we know as corn, another staple of their diet.
Then of course we came along with our know-it-all attitude and began to ‘proselytize’ the Indigenous peoples, here and elsewhere, upsetting many a “corn” “apple” or whatever-cart, and in the process caused lots of cultural conflicts and irreparable damage.
Much of what we know today, we originally learned from the Indigenous peoples. But their practice of working the land was more what we’d call Horticulture, compared with our Agriculture. (Or Agribusiness.) Our agriculture exhausts the soil. Horticulture sustains it. That’s the big difference.
Tables are turning - - now at the rate we’re depleting our food supplies around the world, we are learning from Indigenous Elders about their vast knowledge of Nature.
So in the future instead of parents telling their children, “If you don’t eat your Brussel sprouts, you’ll get no plum pudding”, we may hear “If you don’t finish your steamed locusts, there’ll be no chocolate-dipped ants for you!”
Or our future gourmet meals may contain grubs, lizards, scorpions, beetles, locusts, worms and other protein-containing delicacies.
Bon appétit! Henri
Posted by van Bentum

“I don’t know if it was snowing for nine days when I was six, or six days when I was nine . . .”. Dylan Thomas’ “A Boy’s Christmas in Wales” always brings back memories.
I can relate to that, as I’m sure it does to many. Of course, my boyhood wasn’t in Wales, but the Lowlands. Les Pays Bas, die Nieder-landen, “Nether” lands, which included Flanders at one time in history.
Our home in the countryside had only one source of heating, actually two, but the big iron stove with a long metal pipe going to the chimney and heated with coal was only used to prepare meals. The other source was a small gas stove. We had no electricity.
Because heating sources were scarse, the bedrooms, bathroom and hall were very cold in wintertime.

The only advantage was when the ‘Great Designer of Winter’ created fairy-tale like, lace looking images on the windows. Here they call him Jack Frost.
My apologue (children’s story) “The Icy-Crystal See-Through No-Name Man” is all about this topic. You can read this and other stories at: http://www.millennia.org/artist/stories.htm
In my boyhood winters were often a lengthy affair, and if many frosts had gone over the ponds, moats and small waterways, we would skate. In order to learn this skill, we’d hold onto a chair, pushing it along the ice, for balance, like elderly folk use walkers today.
Our skates weren’t the state of the art models like today. They were made of wood, with a carved, curly front, all held together by leather straps. The early skates were made of animal bones.
When winter was very long, with many nights of frost, in Friesland the famous “Elfstedentocht” would be held. A gruelling, lengthy skating event covering the distance between eleven (“elf”) cities throughout the waterways of Friesland. That’s why the skaters from Holland always do so well in the Olympics and other international competitions.
And yes, in our childhood we made snow men and women, and enjoyed many snowball battles. Children will always be children, no?
Enjoy the hot cocoa. Signing off, Henri
Posted by van Bentum

Remember the song from South Pacific, “Hello Young Lovers, Wherever You Are, I now have a love of my own”? Well, wherever you are in the regular winter and snow zone, we also have snow of our own. Not just a flurry or two. A “white-out”.
No sooner did we complete a five-part series of blog posts on our Antarctica adventure, than pronto, we’re into snowflakes right here in Victoria. Not just a flurry or two but a good carpeting of these magic flakes. I say magic, because we’re told, that not one of these intricately-designed ‘visitors’ is alike.
This seems incredible, as we watch the early morning snow drift, leaving hardly any space between the flakes. To think each one is unique.
Then again, the magic and mystery of such phenomenon doesn’t remain with a snowflake, everything is unique - - - you, me and all that we see (and don’t see).
It’s interesting how a snowfall rekindles memories of yesteryear. Back in the Lowlands, as a child and until we were about five years old, in wintertime my father used to roll us in the snow in our birthday suits. Afterwards he’d rub us down with a large towel. I can still sense the glowing feeling of my body afterwards.
We know the Victoria snow will not last long, unless of course there’s another script in store for the days to come.
Whatever the case, from our perch here on the seventh floor we can see people tobogganing or kids having snowball fights, while we know that further Up Island, snow dolls appear like mushrooms.
We’re usually on the ocean at this time of year, either the South Pacific, Caribbean or Indian Ocean, so for us the snowfall is a pleasant surprise. Of course this isn’t our first experience of the white stuff. Sixteen winters in Toronto tell the tale. Plus five winters in Banff, Alberta.
Looking out our window, and being a visual person by nature, we observe it’s not “all white” out there. The colours of passing cars, the attire of passers-by walking on the path, and many Yuletide lights here in James Bay village all make their appearance. Proving again that colour speaks to us even when surrounded by all that white. Something I knew a long time ago, and make visible in my work.
White is the Mother of all Colours, although Goethe said, “Colour is decayed Light”. That’s all very well, but now in Victoria, where we’re carpeted by snow, all the colours sing! A la prochaine, Henri
Posted by van Bentum