Sunday night Natasha and I were at Alix Goolden Hall (Victoria Conservatory of Music) for a recital by Eve Egoyan who performed “Simple Lines of Enquiry” by Canadian composer and dear friend Ann Southam, who went over the horizon November 25, 2010 at her home. The friendship between Eve and Ann must have come from Euterpe, the Muse of Music. The work is approximately 60 minutes long and a very delicate, difficult piece to play. Eve, who obviously loves Ann’s work, played sublimely.

Here is what Ann Southam has to say about “Simple Lines of Enquiry”:  “Through the application of simple minimalist procedures to a 12-tone row, or more accurately a 12-interval row, Simple Lines of Enquiry is a gentle, contemplative exploration of the emotional possibilities of these intervals and the sonorities they create, and the sound world and resonances of the piano itself.” 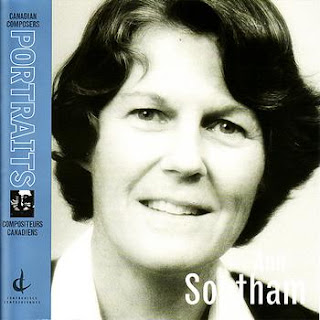 I’ve seldom if ever mentioned Ann Southam in previous posts because in her lifetime she was very humble and didn’t sound her own trumpet.  Now that she is no longer with us, except through her legacy of music which will live on, I can speak more freely of our friendship.

It all began in autumn 1959. I had arrived on Canadian shores in October 1957 as an immigrant from Holland, and settled in Toronto.  In the spring of 1959 a specialist doctor, Wilfred S. Goodman, sponsored an unforgettable journey to Banff National Park, where I became the first-ever guest artist at the School of Fine Arts. This episode has already been posted in an early blog.  All my work of that period I donated to Dr. Goodman.

Back in Toronto in autumn 1959, I lived in the Annex on Walmer Road and rented a bachelor apartment in a house, on the first floor, facing the front, with a bay window. Ann Southam came by every morning in her Navy blue limousine to fetch another student in the master piano class given by Pierre Souverain. It was on Walmer Road where we first met.  We became close friends. 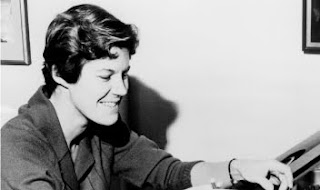 Ann replaced Dr. Goodman as my benefactor by helping me keep my head above water.  Dr. W.S. Goodman no longer sponsored me because in his words “You have gone over my head, Henri, and beyond my understanding with your work”. Slowly but surely it had evolved from ‘landscape to mindscape’.

Ann Southam however viewed this change differently.  She supported me 100% and without her I don’t know what I would have done back then in the fledgling contemporary art scene of the early 1960’s in Toronto.

There is an old saying, “Experience it, so you know”.  Same here, if you wish to know about Ann Southam’s work and the performances by Eve Egoyan (a true ambassador of Ann Southam’s legacy), then we need to listen to the music which is a superb form of minimalism.
Posted by van Bentum