Destiny moves in unknown directions, we all know that.  Seventeen years ago, I was guest artist and lecturer aboard a ship making a circumnavigation around the world, to mark the new millennium in the year 2000. (See Blog posts of 12/2008). We had a class of twenty-five student/passengers over the  4 1/2 months of the voyage.

Amongst them was a couple who lived at that time in Colorado. The woman proved to be an excellent watercolorist and very good draftsperson.

Natasha and I have been on many ships in the same capacity. Over the years I’ve had maybe a thousand or more students. We stayed in touch with only a handful, and amongst them, this American couple.

A few years ago they moved to Arizona. In late 2013 they sent us an email to ask if we’d be interested in looking after their house and their cat, a Bengal breed, while they went on vacation for the month of February.

Since we reside in Victoria, BC and our winters are wet and chilly, the request came as a welcome respite. 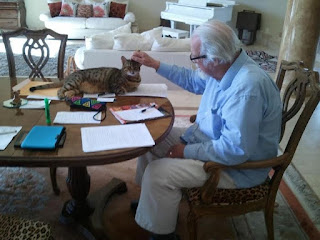 To make a long story short, we not only took them up on their invitation, but returned again the following year while the couple went on a 3-week Christmas holiday.

We probably would have gone back again since then, because we are very fond of this unique species of cat (and great fun to be with) --- except in the summer of 2015, I was diagnosed with bladder cancer.  Happily, however, it seems that now those ‘alien stowaways’ have been defeated.

Not long ago my artist/student contacted me. She asked if I’d like to write a children’s story for a series of watercolors about tropical fish and coral reefs.

And so our collaborative project was born:  a children's fable that will be published as a printed book. The title is “King Neptune’s Jewels with Tails and Fins” (c).  We're currently in the production stage, and the book will feature some twenty illustrations by my artist/friend, whose idea is now becoming reality.

We will keep you posted when the book becomes available.  It will be self-published, using Amazon’s “CreateSpace”.

So, like I said at the beginning of this post, destiny moves in unknown and unexpected directions – which sometimes proves to be a pleasant surprise.