Part One: Remembering the "Peyoteros" or Huichol People of Mexico - the WIXARITARI

On our daily stroll along the ocean shore, we met a woman who was a passenger aboard an Alaska-bound Holland America ship docked 500m away at Ogden Point.  We noticed her colourful shoulder bag and asked where she got it. 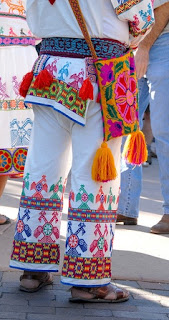 Huichol man in traditional dress, including a shoulder bag similar to what the passenger carried

“Oh’”, she replied with a strong Texan drawl, “I bought it at a "funny" store in Puerto Vallarta, Mexico.I say "funny" as in peculiar because everything there was either made from beads, embroidered or from strands of wool."

Huichol man in Puerto Vallarta gallery where Huichol art is sold
The American tourist continued, "I also bought a bead jaguar sculpture and a small beaded mask.  Forgot the name of the store and the name of the people who make that stuff.”

Huichol artist finalizes beaded JAGUAR head
N. replied to the tourist, "You're talking about the extraordinary Huichol people".  N. had noticed the shoulder bag at first sight. We have two Huichol shoulder bags in our own collection.

This chance meeting made me travel back to the year 1981 when we had our first encounter with the Huichol in Jalisco State, Mexico. They call themselves “Wixaritari” people. It was early December. We were in a taxi in the old part of Puerto Vallarta and went over a bridge that crosses the Cuale River. (Not far from where Elizabeth Taylor and Richard Burton had their ‘love nest’).  Suddenly N called out, “Stop the car!”
"Ceremony of the Gods", animistic cosmos, yarn painting by Shaman Jose Benitez Sanchez
She’d spotted beneath the bridge a group of native people dressed in traditional attire.  The taxi could not wait for us, so we got out to see what was going on. The Huichol are physically small, shorter than the Maya or Aztec descendants. 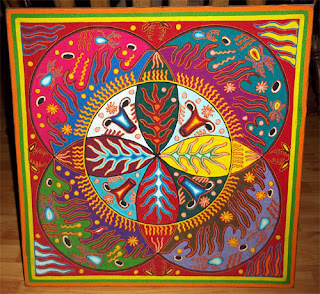 Yarn painting by the late Jose Benitez Sanchez
It turned out to be an ‘outdoor’ sale of their artwork which is deeply connected with their religion. Intrigued by the psychedelic-looking colours, we spent some time exploring the works on display, and acquired four small works on plywood panel completely covered with delicately-applied strands of yarn. Also a mask, fully covered with multi-coloured beads.
We met the organizer who was responsible for arranging the exhibition, an American former paramedic who had been moved by the plight of the Huichol people and was attempting to help them gain their livelihood. These panels of plywood are first covered with beeswax, and then with incredible precision and remarkable patience, multi-coloured strands of yarn are tightly applied in an extraordinary variety of designs and patterns.  These depict symbolic images unique to the Huichol. Likewise, the masks are first covered in beeswax on which beads are placed one by one. 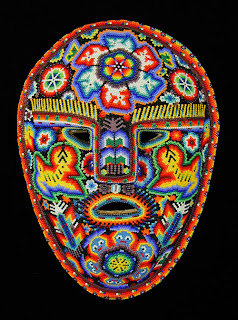 They also make intricately-embroidered and patterned shoulder bags. Likewise, their white cotton attire is beautifully embroidered with their symbols. Back in those days (1981), the Huichol people still wore their unique  traditional attire, not for the tourists, but for themselves.  They believe they honour their gods by appearing as beautiful as possible so it is a form of religious service to create and also to wear these objects. 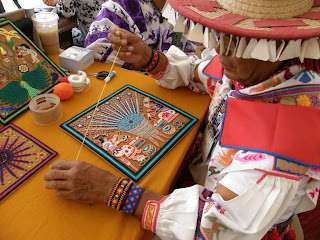 Huichol man creating small yarn painting
At this memorable outdoor exhibition we happened upon ‘just by chance’, everywhere we looked, vivid colours dominated under the shadows of the bridge. A psychedelic display of all their art. These gentle but proud people from Mexico were relatively unknown until the 1960’s.  It’s all very well to say yarn paintings, masks, jaguars, shoulder bags etc all covered with beads or strands of wool. However, the beads used on an object are so closely applied there is no space left between each bead. Just imagine. Likewise with the yarn paintings.  Strands of wool are so closely applied nothing of the plywood shows underneath. An amazing skill and feat of patience and awareness. Today the international art world is well aware of the Huichol and their art and works can be found in various museums around the world. 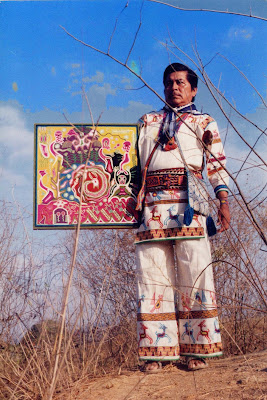 The late artist and Shaman  Jose Benitez Sanchez, who personally gave me this autographed photograph when we met in the 1990's


Since our first encounter, we have added more works to our collection, including one by the master Jose Benitez Sanchez: a large yarn painting on plywood panel depicting Deer, Shaman, Peyote Cactus, Sun and Snake symbolism. This was given to me by the artist as a gift. We’d met up with him, again impromptu, at a gallery.  When he learned I was an artist, he very generously presented the yarn painting and refused to accept any money. He ‘went over the horizon’ in 2009. Click here for more information about Jose Benitez Sanchez. 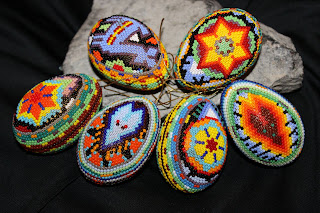 Amazing Huichol eggs covered with beads gently applied to the fragile shells. Just imagine.
Years later during our annual visit to Mexico we acquired the latest Huichol creation:  beaded eggs, rich in symbolism and colour.  You know how fragile eggshells are, so imagine, without breaking the shell, applying myriad tiny beads.

To learn more about the Huichol (Wixaritari) people, visit the Wixarika Research Centre.

End of Part One (to be continued)