On my way to India by ship, I had a 12-day stopover in Kenya.  This created an opportunity to explore. A local train got me to Nairobi, where I met a safari photographer who’d previously been a trophy hunter guide for the rich and famous. After all that needless killing of animals, his conscience made him go to the camera.  He was born in Kenya, with a French mother; his father’s descendants hailed from the Low Lands like me. We got along well, in both English and Netherlands.  Since I had time to spare, he asked, why don’t I come with him to the Great Rift Valley? Two days later we were on our way in his Landrover, along with a local fellow who served as cook. 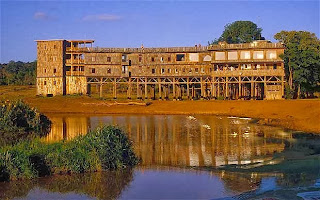 The legendary "Treetops" hotel, Kenya. View of back with waterhole
We stopped first at Treetops hotel, the very spot where a young Princess named Elizabeth succeeded to the Crown and became Queen: on the night of February 5, 1952 back in England, her father King George VI died in his sleep. She immediately became Queen, even though she didn't learn of his death until the next day and immediately cut short her visit to Kenya to return home. 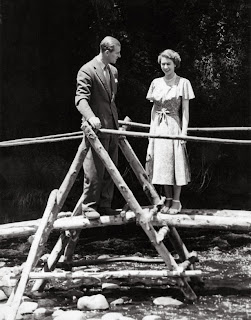 Princess Elizabeth at Treetops, before learning the news of her father's death while she was in Kenya, 'whereupon she immediately succeeded to the Throne' and became Queen Elizabeth II

You have to walk quite a way from the spot where we parked.  My host carried a rifle to keep the wildlife at bay.  No sooner had we taken a few steps when the baboons showed up.  One snatched my bottle of water right out of my hands and sped away.  We were told they love to snatch anything. The Treetops is right beside a big waterhole where animals come to quench their thirst.  As a result there are excellent opportunities for sightings of many creatures. 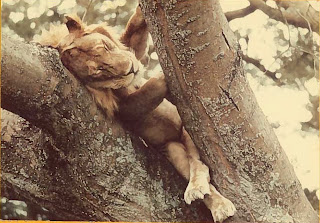 Not a worry in the world.  Sleep of the innocent.
All the guest rooms are located at the back of the building, which overlooks the waterhole.  The tradition at Treetops is you are given a card where you mark with an “x” the various creatures you observe from your window. Giraffes, Zebras, Wildebeest, Bongos (rare and shy) and other types of antelope and Gazelles, to name a few. At night Lions arrived. Suddenly I noticed a small creature peering through my corner window, the only one with a tree. He was sitting on a branch. It had huge eyes. 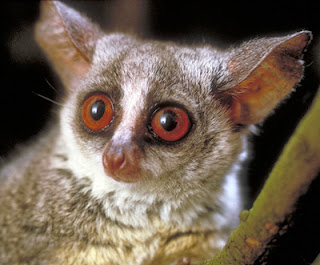 He may be nocturnal, but I also had to become nocturnal in order to spot him
Checking my list, I noticed the word “Nocturnal Bush baby”, and made a guess, checking that box with an “x”. Very early, pre-dawn, Elephants appeared at the waterhole.  I didn’t sleep a wink that night.  An extraordinary 24 hours of close-up wildlife encounters. Bush baby it was!  So, guessed right. 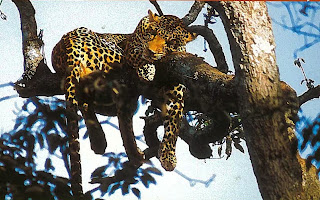 Leopard in tree, guarding his lunch. "That's my lunch, no one can get near it."
Continuing on our travels in the Landrover, we came to Lake Nakuru. Myriads of Flamingoes covered the Lake as far as we could see.  My host told me, “Clap your hands.’ 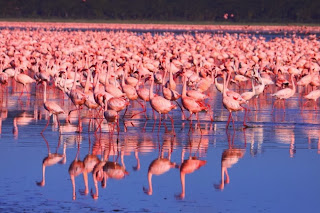 Flamingoes, Lake Nakuru.  It's not recommended you do this, but in those days you could clap your hands, and woooosh! the sky turned pink
I did, and the whole lot of Flamingoes took flight, painting the cobalt blue sky -  pink!  An unforgettable sight. We caught sight of many more animals en route to the region where the Maasai lived, our next stop. The Maasai are nomads and cow-herders, famous for their more than average height. For protein nourishment, they drink the blood of their cattle, mixed with milk in a gourd.  (The name “Kenya” means “gourd”.) 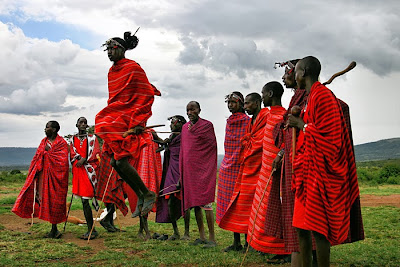 The Maasai, natural wanderers and cow herders
At night the Maasai protect themselves and their cattle from lions and hyenas by encircling their livestock and families with tall branches of the Acacia or Thorn Tree whose long, sharp spikes deter predators. Yet we could hear the lions and laughing of the hyenas, their eyes glowing in the reflected firelight.  But the campfire and thorn trees kept us safe.

Altogether, an amazing 12 days, a completely unexpected trip, and of course memorable.

To be continued. Next: Part Four.

A train ride in India is always adventurous and exotic at any given time, especially for the visitor.  The carriages are packed no matter whether it’s the Calcutta-Delhi Express, the Mumbai (Bombay) – Calcutta routing, or on rural trains. 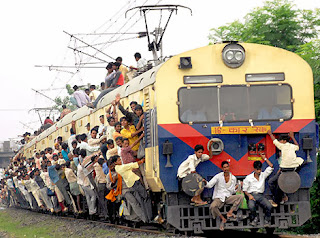 When possible, it’s good to get a first-class ticket if you wish to avoid the crowds. Not always easy, but they are available if you ask the ticket-seller.  On one of my rural train rides (after experiencing the Calcutta-Mumbai Express), a man dressed in traditional Indian attire joined my compartment, where thus far I’d been alone. 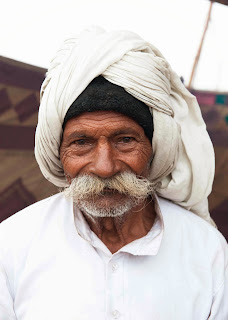 He had the strangest animal with him on a leash. I’d never seen anything like it before.  It had a long snout and was very restless.  I couldn’t keep my eyes from this creature, who although on a leash, was definitely wild. “Do not worry”, said the man. “Does not bite.  Only cobras.” “What is it?” I asked. 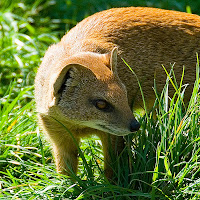 “Oh, you do not know?  This is a Mongoose.  I am a doctor and visit patients in rural villages where there may be King Cobras.  That’s why I have my protector and friend with me.  Did you know the Mongoose is the only animal that will take on a Cobra and kill it? 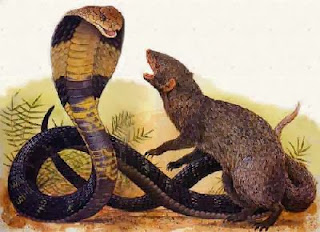 Well, what a revelation.  Imagine, a GP who does ‘house calls’ with a Mongoose, protecting him from venomous King Cobras.

Part One: Encounters with Creatures, Banff


Google has an analytics system that shows what countries blog readers are from and one such visitor, a woman from Spain, asked if besides the sherry-sipping mouse (see Oct 5 post below), whether we had encounters with other creatures.  Well, amiga, there have been several.  Over the next few posts, we’ll begin to share some of these experiences. Let’s put them in chronological order, starting with this one.


Henri van Bentum painting 'en plein air', Banff National Park 1959
In 1959 I was based in Banff, Alberta in the Rocky Mountains from early spring through late summer.  I was painting landscapes ‘en plein air’.  During these memorable months, I had at least three close encounters. One morning very early while hiking at Vermilion Lake, looking for a good spot to paint the mountains, beaver pond and lake, I met a black bear head-on. I stopped and stood still like a statue. 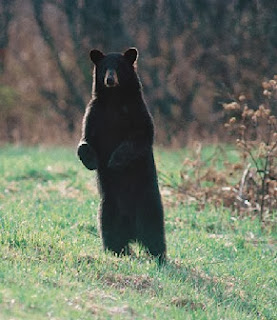 The bear got on his hind legs, looked, sniffed – then lumbered back onto its four legs and disappeared into the bush. He was only 10 metres away.

Beaver Pond, Vermilion Lake, Banff oil on masonite, Henri van Bentum 1959 (artist's collection) where I encountered the bear and a strange creature (see below)
That same morning, while painting in this relatively untouched area (there were few tourists at that time in Banff National Park), a strange-looking creature appeared, arising out of the lake. It had big, flat antlers, a long snout, and bits of green were drooping out of his mouth. Later, back in the town of Banff at my rooming house, I described this strange animal to my landlady. 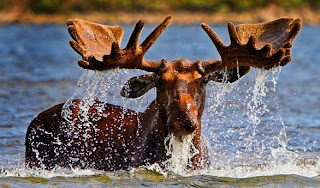 “Oh! , she exclaimed, “that’s a Moose!”
At my rooming house on Otter Street in Banff (known as "Mrs. Parkin's House"), early one morning in the bathroom I was surprised to see a BAT, huffing and puffing on the window sill, its wings spread out, staring at me. It fluttered a bit when I opened the window, and took off into the dark.

Must have come down the chimney. That same summer I was painting high up near Petyo Lake, looking down onto its beautifully, milky-turquoise waters.


I was working with oil pastels. Suddenly, I heard a rustle right behind me. Oh Oh, I thought, another bear, maybe a Grizzly! I turned around and much to my amazement and amusement, I noticed a chipmunk eagerly nibbling away at one of those oil-pastels. The rustling I heard was the sound of the Pika unwrapping the paper covering of the oil-pastel! 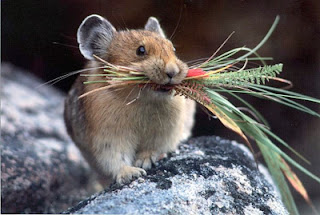 Pika, Banff National Park - I didn't have a camera with me so couldn't capture
the Pika eating my oil pastel stick, but this gives you the idea.

End of Part One