The Sacred Scarab of Ancient Egypt


We discovered our blog is being read by people around the world, thanks to Google analytics. The Internet (or what I call “electronic intelligence”) is spread 360 degrees across the globe. And who knows, maybe deep in the cosmos too. Of course people need to read English.  But then again languages are translated in all tongues on the web. Someone in Russia (yes, our humble blog is read over there), asked if we’d elaborate a bit on why the ancient Egyptians worshipped and held the scarab (dung beetle) in such esteem. Glad to oblige.

What’s amazing is how the ancient Egyptians observed the dung beetle’s behaviour; they must have had a keen awareness. First, they noticed how the dung beetles rolled round balls. 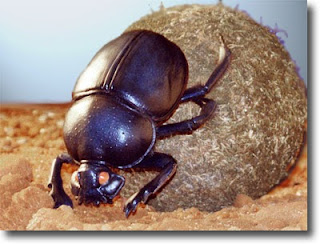 This reminded them of the Sun and its movement from morning to night. They observed how these remarkable beetles buried these balls, like some kind of funeral, burying the dead.  But when newborn beetles appeared from the balls, it evoked in the Egyptians thoughts of reincarnation.  This lead to their creation of ‘scarabs’ from semi-precious stones, clay or metal, and even gold, which they buried with their dead. The Pharaohs in particular were in awe of this sacred beetle. 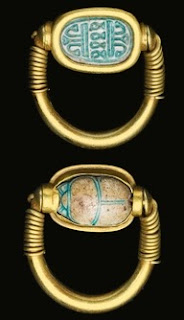 So much so that besides using them as sacred symbols, they had special rings made (“swivel rings”) with their rank and position marked on the bottom side of the scarab in hieroglyphs, to use for sealing documents. They also observed the white beetle grubs in the balls, which inspired them to wrap their dead in white cloth to make mummies. Scarabs can be seen in any museum around the world that has an ancient Egyptian department. 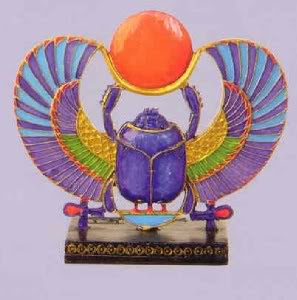 Trust this information helps to shed more light for our blog reader in Russia about this amazing beetle’s journey and behaviour, and its important role in ancient Egypt, symbolizing the cycle from life, to burial and rebirth.


More about Ibiza. Ibiza was originally settled by the Phoenicians. 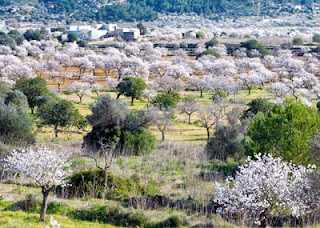 "Isla Blanca" almond blossoms
It was known as “Isla Blanca” (white island) for two reasons:  one for the white painted houses, two for the almond tree blossoms covering the island in spring (as well as lemon and orange trees). 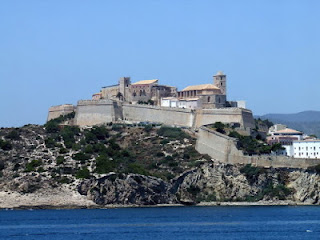 View of walled-in Ibiza town
Old Ibiza is a walled-in town and the main entrance is via a large, high gated door. During my four months on the island in 1961, a few more classic yachts visited, but one of them was exceptional: (like the ‘Farouk’ yacht mentioned in my earlier post of June 22) was “an ultimate superyacht”:  the Shemara.  She was owned by a famous Englishwoman, Lady Docker.  At 65m in length, Shemara was talk of the town. 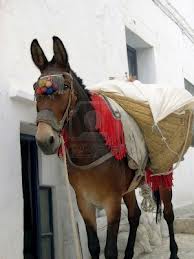 Shemara regularly cruised throughout the Mediterranean to the Baleares islands of Mallorca, Ibiza, Menorca and Formentera, and to North Africa, Monaco and Turkey.  In fact at the time of Shemara’s visit to Ibiza, Lady Docker was on the Riviera.For security and privacy reasons the yacht was at anchor rather than docked, with crew coming ashore by small tender and rowboat. Once again, it was while having my lunch at the waterfront bodega that I met (not the Commodore as described in my earlier post), but the yacht’s Chef de cuisine and hostess. 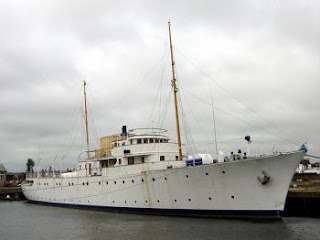 "Shemara" today, 52 years later, waiting for retrofit
That day I decided to walk my donkey into town instead of going by bike.  The hostess was intrigued to see a donkey hitched up near the wall of the bodega entrance. Well, the donkey wasn’t actually “mine”, it came with the villa I’d rented and belonged to the owner’s daughter who lived in Barcelona. That’s why the monthly rent was only $65.Anyway, the hostess thought it was intriguing to meet an artist with a donkey.  The chef and hostess were on their way to the market for fresh produce in the old walled-in town.The hostess invited me to a party aboard the yacht the next day.

Marquita Kwan in her 20's, a few decades before we met
My neighbour, Marquita Kwan, was a fascinating woman.  She was a former fashion model in England. She had been the one that connected me with the villa owners where I was staying, and was my closest neighbour. 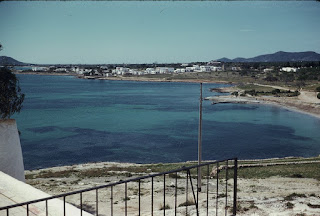 View from balcony of my rented villa that came with a donkey
Her villa was just 50 metres up the hill.  She was mother of the actress Nancy Kwan, who in those days was a famous movie star of “Flower Drum Song” renown.   Marquita was very keen on protocol and “good manners”. I persuaded Marquita to be my companion at the party.  Marquita was in her ‘50s while I was 32.  Everyone aboard the yacht thought she was my mother, in jest of course. We were amazed at the interior of the yacht. Opulent, chic, elegant, splendour would be good words to describe it.  There were a good number of guests aboard who were part of the yacht’s cruise, mostly in their 30’s-40’s. The party was being held in honour of a British aristocrat. Food was plentiful, of gourmet, delectable quality. Hard liquor, beer, wine and champagne galore.  Soon the party evolved in to a Bacchanalia. Marquita was not amused when I danced with some of the scantily-clad guests, some of whom were topless.  Marquita insisted she be taken ashore. The party lasted til the early morning, and next time I saw Marquita she berated me and focused even more on ‘manners’. 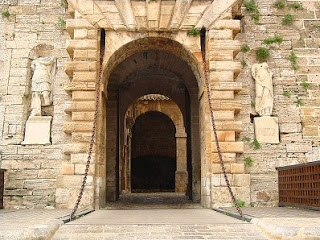 Entrance gate to the old walled-in town, Ibiza
So there is another brief snapshot of some experiences on the island of Ibiza that included invitations to visit remarkable yachts.   And all because of (a) stock market nerves of the Commodore (b) the sighting of a donkey.