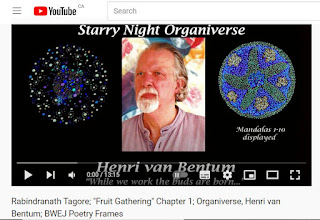 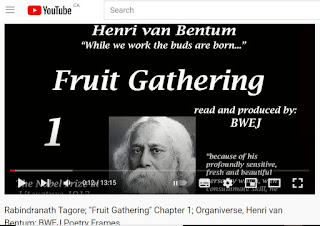 (To go direct to all ten videos, visit YouTube and search for "BWEJ Poetry Frames". Also see below.)
Today, Feb. 5th, we are happy to announce the official launch of Part Two, explorations with the poetry (songs) of Rabindranath Tagore, and Organiverse.
This time, it is the “Starry Night” or Bioluminescent edition of my “Organiverse” 100 mandalas, with Tagore’s book of poems “Fruit Gathering” (1916). 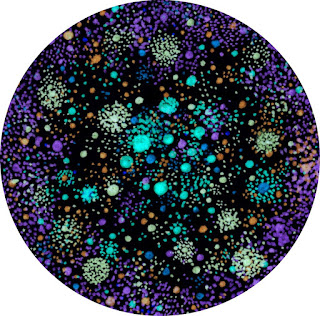 Mandala 25 of 100 set, Organiverse 'Starry Night' edition. See Chapter (Video) 3.
Part Two is produced and read by our friend Brian WE Johnson (BWEJ) of Victoria. We would like to express appreciation for his diligent and thoughtful work.

“Fruit Gathering is a collection of short poems by Rabindranath Tagore. The theme of this book is based on the relationship between God and man, the atom and the cosmos. Tagore uses fruits and flowers to symbolise his spiritual and moral values towards the love for the creator.”  (Indian Culture)

For details about “Organiverse”, please visit our Jan. 1st post on Part One, Organiverse / Gitanjali.

LINKS TO ALL TEN CHAPTERS (VIDEOS) OF ORGANIVERSE / FRUIT GATHERING:

Launch of "A JOURNEY INTO THE ORGANIVERSE WITH TAGORE", 1st January 2022 - marking the 50th anniversary of "Organiverse". Produced and narrated by BWEJ.

"Having built a nice fire in our woodstove, I sat comfortably watching and listening to Chapter One. The slow pace is just right and the narrator's voice lets the poetry speak without sentimentality or piety. To see each of your mandalas in this context is very enhancing - seeing it in relation to the verse, and speculating on further meanings."  Marina Bieler 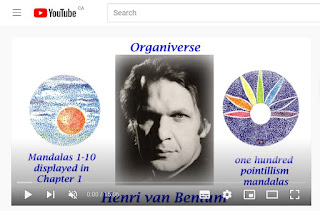 Screen capture of Chapter One
[For direct access to the chapters, go to You Tube
and search for "BWEJ Poetry Frames"]
To mark the 50th anniversary of "Organiverse", today we are happy to announce the launch of "A Journey Into the Organiverse With Tagore", a series of ten sequential video and audio chapters embracing one hundred mandalas and one hundred poems in total.  (The links to all ten chapters can be found at the end of this post.)
Each chapter features 10 mandalas from my “Organiverse” series of pointillist paintings created in 1972, and 10 poems by Rabindranath Tagore from his work “Gitanjali” (Song Offerings).  In 1913, Tagore was awarded the Nobel Prize in Literature for "Gitanjali".
I would like to thank our friend, who goes by his initials BWEJ, for his idea of pairing the two and for his diligent work on producing the videos ("digital poetry frames") which he also narrates. 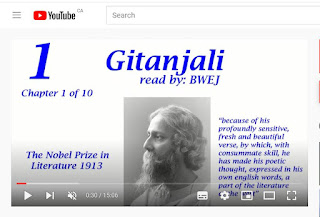 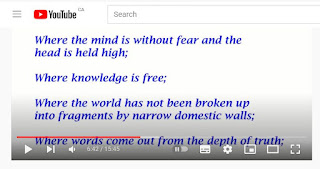 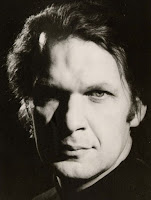 Henri van Bentum, 1972
Words from the Artist about Organiverse

Background: In the spring 1972, I began creating a set of 100 mandalas (paintings) and named the set “The Organiverse Portfolio”.
Organiverse is a meditation aid or 21st century kasina practice. (Kasinas are visual aids traditionally used in Buddhist practice.)  The initial ten mandalas were done in Morocco, in the former Phoenician fishing village of Essaouira (Mogador), now a UNESCO World Heritage Site. 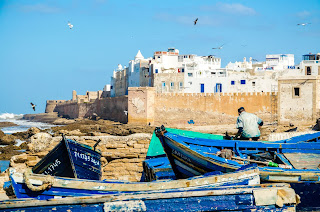 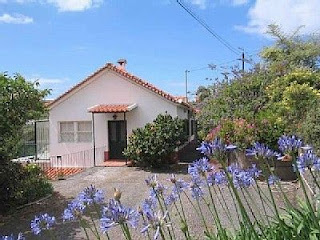 This small cottage is a former cow shed located on the estate of Quinta Santo Antonio in Funchal, Madeira, where Organiverse was completed in 1972. (On the mountainous terrain of Madeira, cows used to be kept in sheds to prevent them tumbling down the slopes.)
The concept and production of this 50th anniversary project has been made possible by our friend BWEJ. He has been a steadfast supporter and patron of “Organiverse” for more than a decade.
Tips on viewing "A Journey Through The Organiverse With Tagore":
Slow is beautiful and good for healing.  This journey is an unhurried and peaceful visual and audio experience. Each chapter takes around 15-20 minutes to view. Ideally the chapters should be seen in sequence (chapters 1-10).
• "Organiverse is a glimpse into the multilayered beauty of all that is life. These mandalas offer an opportunity for healing and for a heart-based understanding of who we are physically, emotionally and spiritually -- a dance of colour, form and contemplation."  (Dr. Mark Sherman, MDCM, CCFP)
• The poems (songs) of "Gitanjali" embody the essence of Tagore’s poetic spirit and devotion, conveying a deep connection to Nature. In 1913, Tagore was awarded the Nobel Prize in Literature for Gitanjali.
"Combined together, this fusion of Henri van Bentum’s artwork and the poetry of Rabindranath Tagore takes the viewer on a new journey of healing and insight."  Natasha van Bentum
Here are the links to all ten chapters:

With appreciation also to my partner Natasha van Bentum,

who has been with me on the Organiverse journey since its inception fifty years ago.