We had a few requests to elaborate, if possible, on the symbolic meaning of “Rudolph the Red Nosed Reindeer”. We gladly oblige, allowing us to share my interpretation with a wider audience. It is very wintry across the continent including here on the West Coast so it’s not only the ‘season’ but here in Victoria we have a rare White Yuletide.
In 1938 Gene Autry, the singing cowboy, made “Rudolph the Red Nosed Reindeer” famous. It was back in 1946 and a big hit on Radio Luxembourg (US Armed Forces network) where I first heard it. The man who wrote the lyrics was an American advertising executive, but “Rudolph” is poetry. Music was composed by Johnny Mark. 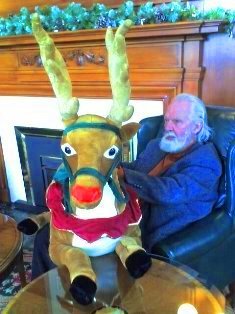 I’m not sure how well Robert May knew the bohemian heartbeat of poets and artists, but he definitely hit the mark when it comes to how talent often goes unrecognized. Most artists, the gifted, visionary ones, rarely receive recognition while they’re alive. There are a few, like Picasso, but it’s uncommon.
Many artists are acknowledged by the public only when others, such as highly-popular figures in society, bestow accolades (whether they be painters, composers, sculptors, even some scientists or inventors, and last but not least, a messiah.)
Now, here we have a reindeer with a red nose, and if you care to look a bit closer, you’ll notice that it glows. All the other reindeer called him names and wouldn’t allow Rudolph to join in their games. (Ostracized). They mocked and made fun of him, humiliating poor Rudolph.
Vincent van Gogh comes to mind. He was treated “less than a dog”. Likewise with Emily Carr here in Canada.; she was not welcomed with open arms either!
On the other hand, Santa could be seen as Time. Through the passing of time, the well-deserved recognition of genius (Rudolph) is recognized, revealing something that was always there from the beginning.
Finally, because of this time lapse, we honour someone special, someone who gave the world beauty and treasures - - food for the soul, in this case the toys and goodies carried by Santa on his sleigh, guided by Rudolph’s glowing nose through the fog (ignorance). Light in Darkness.
Then of course, all the reindeers love Rudolph, and sing out in glee. Just like today we all love the Impressionists or Vincent van Gogh, or whomever, a century after their demise.
Now, yes, we can sing and say, “Rudolph, you’ll go down in history”. But while alive, most great artists had to live in misery.
Well, that’s my version of this popular Yuletide song, which has also been judged by history and become an evergreen. Happy sleigh rides! Henri

You know Dasher, Dancer, Prancer and Vixen,
Comet, Cupid, Donner and Blitzen,
But do you recall,
The most famous reindeer of all?
Rudolph, the red-nosed reindeer
had a very shiny nose.
And if you ever saw him,
you would even say it glows.

All of the other reindeer
used to laugh and call him names.
They never let poor Rudolph
join in any reindeer games.

Then one foggy Christmas Eve
Santa came to say:
"Rudolph with your nose so bright,
won't you guide my sleigh tonight?"

Then all the reindeer loved him
as they shouted out with glee,
Rudolph the red-nosed reindeer,
you'll go down in history
Posted by van Bentum