Yesterday we devoted our post to Fractals as seen from my point of view as an artist. Today we share a quote sent by a friend, from the pioneer mathematician Benoit B. Mandelbrot in his seminal book “The Fractal Geometry of Nature”:

"Clearly, competing with artists is not at all a purpose of this essay. Nevertheless, one must address this issue. The question is not whether the illustrations are neatly drawn and printed, and the originals being drawn by computer is not essential either, except in terms of economics.

But we do deal with a new form of the controversial but ancient theme that all graphical representations of mathematical concepts are a form of art, one that is best when it is simplest, when (to borrow a painter's term) it can be called "minimal art". 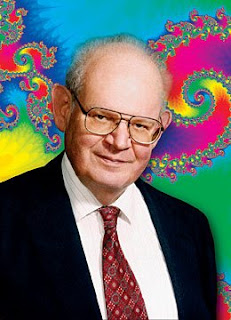 It is widely held that minimal art is restricted to limited combinations of standard shapes: lines, circles, spirals, and the like. But such need not be the case.
The fractal used in scientific models are also very simple (because science puts a premium on simplicity). And I agree that many may be viewed as a new form of minimal geometric art.  The fractal "new geometric art" shows surprising kinship to Grand Masters paintings or Beaux Arts Architecture.

An obvious reason is that classical visual arts, like fractals, involve very many scales of length and favor self-similarity. For all these reasons, and also because it came in through an effort to imitate Nature in order to guess its laws, it may well be that fractal art is readily accepted because it is not truly unfamiliar. . ." (Benoit Mandelbrot)
Posted by van Bentum

A friend who is very interested in Fractals and creates them wondered about similarity between fractal imagery and abstract art, which gave me the idea to write this post which topic might be of interest.

Mathematician Benoit Mandelbrot was the fractal pioneer, created with "Intelligent Electricity" (my term for computers or anything electronic). Back in the late 1960’s, I was offered by a professor of computer science at University of Toronto to have carte blanche, as an artist, with their computer equipment, to experiment with new forms of expression, but declined.

This new art of fractals is now taking its place amongst 21st Century artforms.

When seeing these images in 1999 aboard “Ocean Explorer I” on the world cruise (shown by a passenger from New York who had a disc of them), I was spellbound.
He was a student in our creative exploration art class in the ‘floating studio’ and we’d given an assignment to do abstractions with the primary and secondary colours.

After this he invited us to his cabin where he had his computer. I had heard earlier about Fractals, and seen still photographs, but this fellow showed the images moving and he could also stop them as “paintings”.  I immediately realized we were dealing here with a new art form, albeit one only possible to create with electricity input or batteries. (Intelligent Electricity)

During the 1960’s in times of Psychedelic art and Flower people, some beings were doing fine drawings, spirals, wheels within wheels, which may give the impression of a similar spiritual-climate as Fractals.  Then there are the intricate early drawings by Escher, which I’d seen originals as a boy in Holland. Although he belongs more to Optical Illusion style and category - - while Fractals are a reality in Nature. 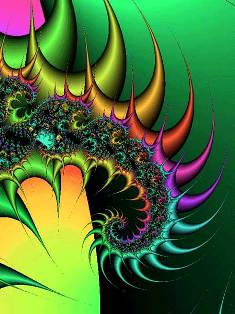 Mandelbrot tried to find a way of expression that followed Natural laws. One only needs to look at ferns, broccoli, kale, trees (with or without leaves), clouds, bronchia (lungs), and coastlines as seen from space. That he succeeded in finding the ever-never land imagery from such a ‘simple’ formula now has its own language.

On the one hand there are strong similarities with abstract art, while on the other, you recognize ancient symbols already interpreted by the Tibetan monks and thangkha artists, (especially their depictions of clouds). But of course those were and are still done by hand.

It is not that Fractals are a continuum or have that potential within the design, but each frame could be an image by itself, such as we can see for example with Fractal calendars. Visually then, to look at them without movement they give the impression of modern art.

The greatest art is knowing When and Where to stop, not add. Such simplicity gives it strength. Fractals could be called a never-ending variation on the same theme, like the music of J.S. Bach.

Computer art it certainly is, and an art form that is unique and which stands entirely in its own realm. Signing off, Henri
Posted by van Bentum