"From Earth to the Universe" IYA 2009, and ORGANIVERSE, Part Two

“To infinity and beyond, in both directions,
The micro and macro cosmos.” Henri van Bentum

In the previous post, we promised to elaborate some more on the contents and philosophy of Organiverse. Organiverse is a series of 100 paintings which I created in 1972, all done dot by dot, in pointillism. Each painting is a sphere or mandala, 8 ½ cm in diameter. 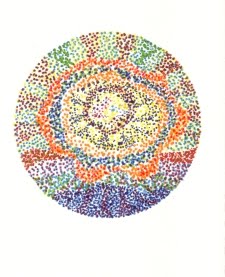 Not long ago the original images were digitally scanned and they are part of the upcoming “From Earth to the Universe” (FETTU) exhibit here in Victoria. FETTU is one of the projects marking the International Year of Astronomy 2009 http://astronomy2009.org. Why pointillism? For one thing, because there is nothing solid in the Universe. Everything is separated. The planets, stars, even the Sun appear as a “dot” in space.
I coined the word “Organiverse” back in the 1970’s from two words “Organi/c” and “Un/iverse”. In the beginning there was darkness. Darkness became light. And light is colour. Organiverse embraces the evolution of colour, born from the three primaries of Red, Yellow and Blue.
From the un-formed comes form. There are no words or explanations necessary, really. What is needed is time and patience to let it all sink in, by contemplation or meditation.
Each viewer will experience the work differently according to their individual life experience and total sum of awareness. You could say Organiverse embraces the macrocosm within a microscopic frame of reference.
With this work we explore organic processes on the cosmic and microscopic levels, with here and there, a pause - - - linked to the noumena (as opposed to phenomena). But always maintaining its spirit of metamorphosis and evolution.
Now, thirty-seven years after its creation, and thanks to contemporary digital scanning technology, Organiverse is being shared with a wider audience in 21st century fashion on large flat-screens provided courtesy of SONY Style.
It’s not what I originally intended, back in 1972, but as Natasha observed:
“Organiverse will grow on the viewer,
Like friendship and music.
Observe it without distraction,
Quietly in solitude.
You will discover this contemplative Opus
Brings a welcome antidote to our stress-laden times.”
Natasha van Bentum

Here are a couple of others quotes about Organiverse:
“Organiverse is a glimpse into the multilayered beauty of all that is Life. As a physician and healer, I feel that these mandalas offer an immense opportunity for healing, and for a heart-based understanding of who we are physically, emotionally and spiritually.
Peering into each mandala, one witnesses the microcosms and macrocosms of Life, and penetrates to the very depths of that which is Truth. A dance of color, form, and contemplation, Organiverse is a meditation on selflessness.”
Dr.Mark Sherman MDCM, CCFP

“The dots are amazingly clear. Aside from their stunning pristine beauty, there is also a subtle intelligence in the progression. It seems the artist retained each image which he developed day by day --- an amazing visual memory and disciplined craftsmanship." Sonam Gyatso. 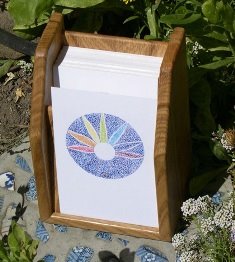 "I am extremely pleased with the beauty and depth of the Organiverse Folio. It is a garland of flowers in my daily experience. It is a wormhole entrance into both the depths of of the starry night and the inner life process of the biosphere we inhabit. A tour de force that will reverberate down the annals of human cultural history. A unique and magical work of true and lasting significance. Thank You!" Brian W. Johnson, MSW.

The FETTU exhibit will also include artwork by over one hundred Greater Victoria schoolchildren, as well as a limited number of images by First Nations’ artists. Signing off for now, Henri
Posted by van Bentum

"From Earth to the Universe" IYA 2009 and Organiverse

“In each atom of the realms of the Universe,
There exists vast oceans of world systems.” Great Flower Ornament

After a fortnight of quiet on the blog front and a replenishing sunny visit to Mexico, Natasha and I were happy to see the universe is still unfolding as it should - - - a new year, Year of the Ox, has begun and new era at the headquarters of our Southern neighbours.

Speaking of the Universe, Sunday, February 1st heralds the opening of a special exhibit here in Victoria as part of the International Year of Astronomy 2009. One of the cornerstone projects of IYA 2009 is “From Earth to the Universe”, an exhibit of breathtaking images of the cosmos http://astronomy2009.org.
It takes place at The Bay Centre in downtown Victoria and also Victoria International Airport.
What’s makes us all the more curious and interested in this event is we’re not only onlookers, but participants since my work “Organiverse” will be included in the exhibit. This is my major opus of 100 spheres all done in pointillism, dot by dot.
It all began in Morocco back in 1972, in Essaouria. Already at that time I embarked on minimalism in my work, simplifying and practising “small is beautiful” with an ecological approach to art.
A close friend and mentor suggested (knowing I had the time, patience and experience), that I explore doing some work in pointillism. He didn’t suggested at all what to do, but simply ‘pointed’ (ho-ho) to the technique. Thus it all began.
I used a small-format, size-wise: a sphere or mandala the size of the palm of your hand, 8 ½ cm in diameter.
While in Morocco we experienced some fierce winds from the desert. Blowing Harmattan winds and sandstorms created havoc with my work, so we shifted base to the verdant slopes of sunny Madeira.
Organiverse was painted on 25 folios each with 4 spheres. As mentioned earlier I’d been working with the concept of “small is beautiful” and thus this series gave me an opportunity to put it fully into practice.
Pointillism requires the skills of concentration, keen awareness, patience, a steady hand and sharp eye. Organiverse is also a study in colour, but more on that later.
Once the concept of the complete series was born, all I needed then was to fit the work into an evolution with a beginning and ending – Alpha and Omega. For the sake of discipline and guidance, I had to know when to “reach” Omega, hence the figure of 100.
All the imagery within each sphere is created spontaneously without a sketch. Dot by dot, atom by atom. 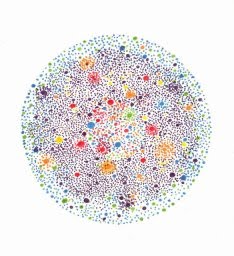 My philosophy is that visual art is silent communication, but because so many people have asked numerous questions about the origin and history of Organiverse, I’ll write a bit more about it in the next post. Signing off for now, Henri
Posted by van Bentum