On Thursday history was made in Haida Gwaii here on the Pacific coast. Members of the Haida Nation raised a colourful, impressive, 13m totem pole at Hlk’yah GawGa at Windy Bay, a ceremony witnessed by over 400 people who arrived in kayaks, canoes and boats. 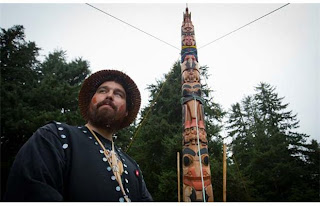 Head carver, Jaalen Edenshaw, was joined by his crew who finished off the top of the pole with copper eagle feathers. It was the first pole to be raised in this remote region in 130 years. The totem pole is located at the site where, in 1983 native elders faced off against the RCMP to stop logging. It became known as the Lyell Island blockade. The clearcut logging was doing untold damage to their land. The protests led to negotiations that eventually ended in the creation of a national park, Gwaii Haanas. The park is jointly managed by the Haida Nation and the government of Canada. 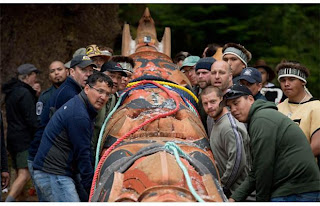 The raising of the totem pole on Thursday marked the twentieth anniversary of the signing of this milestone agreement. 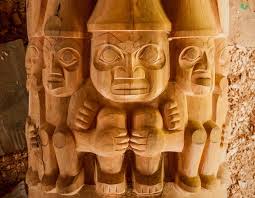 "The Five Good People" symbolizes the Lyell Island protestors who blockaded the logging road in 1983
The totem pole depicts the grizzly bear, the raven, the sea wolf, and “the five good people”, symbolizing those who blocked the road to prevent the logging trucks from going through. The 3,000 kg pole was raised in a moving ceremony that demonstrates the strength of their culture and their compassion despite all the wrongdoing they have endured in the past since arrival of the “white man”. 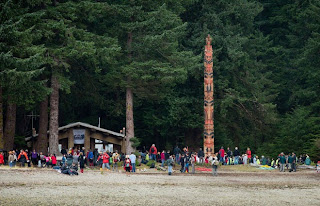 Hlk’yah GawGa, Windy Bay
The ceremony underscored not only the Haida people’s love and respect for their ancestors, but also for their brothers and sisters, the environment and all creatures. In this way they serve as role models for western cultures, where our world leaders more often show negligence and indifference in these matters. 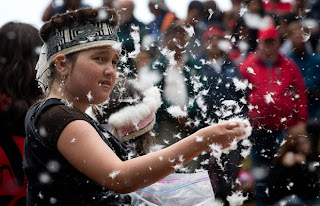 You can watch a video of the legacy pole raising here: http://www.haidanation.ca/

“The legacy pole tells the story of how we work together for the common good, resulting in the successful care of land and waters for the benefit of all people”, said Peter Lantin, President of the Haida Nation. This homage pole is not ‘just’ a totem pole but a proud and powerful statement by an indigenous people who, in spite their circumstances, can show the world they are not defeated. 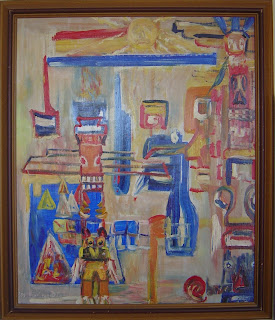 "Disappearing Culture", oil on masonite,
Henri van Bentum, 1959, Banff.
Formerly Permanent Collection The Banff Centre, Now in Artist's Private Collection.
This moving ceremony reminded me of my very early days in Canada after emigrating in 1957 from the Lowlands. Less than two years later, while painting in the Rocky Mountains in 1959, I created this work. It is my ‘impression’ of how I viewed the state of the culture of the indigenous people at that time. Notice the Sun is not smiling.