My children's fable has been published, with illustrations by PJ Heyliger 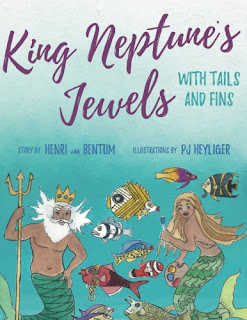 King Neptune's Jewels with Tails and Fins is a whimsical and delightful visit to the realm of tropical fish in a coral reef, complete with King Neptune, mermaids, Moray eels, nudibranches, parrotfish, seahorses, and many other creatures. Written by Henri van Bentum and illustrated by PJ Heyliger. 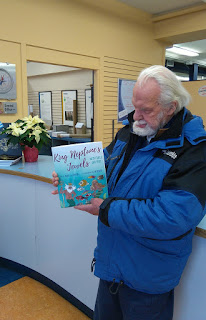 Henri with book, "hot off the press" at Printorium (Island Blue)

One reviewer summed it up in a word:  "Fintastic!".

Now available on Amazon.com and on Amazon.ca, and soon in Europe, Japan and Australia.

Re-uniting with family, thanks to the Internet


For those who have lost contact with family members or friends, do not give up.  The Internet is a vehicle which facilitates re-uniting, no matter how long ago you last heard or seen any of the family.

Before exiting from this “tear valley and laughing hill” called planet Earth, (I am 87), I wish to include in my blog just such experiences – re-uniting with family members via the Internet.

For many years, as long as I can remember, I have led a nomadic life.  Natasha is also a ‘nomad’ at heart, and together we travelled around the world – always on a shoestring – or did housesitting.   We rarely had one address for more than a few months or couple of years.  And so contact was lost with many people.

But, within the past ten years, a number of kin showed up.

First, a son of my late sister, my nephew, Walter Harder.  Walter’s wife, Ingrid, had been searching on the Internet and came across my website.  She was pretty sure I was Walter’s “long-lost uncle”, and so they sent us an email.

The wheel was set in motion for many years of correspondence, all by email, and the occasional phone call.  Walter and Ingrid reside in a part of the Netherlands called Flevoland.  That’s the region which was once part of the Zuiderzee.  When I was a boy, Flevoland did not exist.  The Netherlanders transformed the sea into land, for cultivation and for housing.

We never met in person, until last year, when Walter overcame his fear of flying, and travelled here to Victoria with Ingrid. Together we had a memorable visit and of course we continue to stay in contact by email. 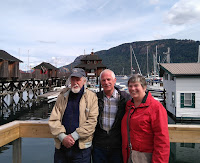 Henri with long-lost nephew Walter and Walter's wife Ingrid at Cowichan Bay, BC

Then, I learned my daughter Maya and my ex-wife Kaye live in northern British Columbia.  Here is a picture of Maya with her horse.

Maya has two grown daughters,, Kayla, and Marlee.  Kayla has three children, my great-granddaughters -- all girls!  Here they are: 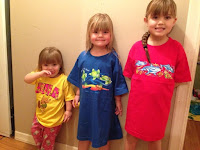 My great-granddaughters:  Claire, Faith and Ali

So, within a short space of time, I went from little or no family contact, to contact not only with my daughter and ex-wife, but two granddaughters (Kayla who is 24 and Marlee, 19), and three great-granddaughters -- Claire (8), Ali (6) and Faith (4). 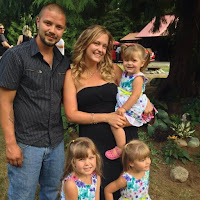 My granddaughter, Kayla, with husband Dakota, and the "Three Graces"
Kayla is married to a young man who is First Nations. His people have lived in that region for thousands of years. 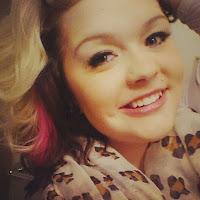 Maya, my ex-wife, Maya's daughters and my great-granddaughters all live close to the Great Bear Rainforest.  Natasha and I visited the clan in August, 2015. It was also my 85th birthday.  Another memorable experience.


Next, one day we received an email out of the blue from my long-lost cousin who I hadn't seen since the 1950's.  She lives in the Canary Islands, part of Spain. She had also discovered me via the Internet, like my nephew Walter, and we are now in contact regularly.  She is the young age of 93. Here is a photo.

My long-lost cousin, who is 93 years young

And now, only four days ago, I heard from my other nephew, Ruud, in the Netherlands. I hadn’t seen him for fifty years.  He is the second son of my late sister Wilma. Ruud and his wife Mina live in Amsterdam.   They have their own radio station and this week I listened – again via the Internet – to his live radio show, where he played two songs I had requested the day before. It was 10 am here and 19h00 in Amsterdam. Those two songs had been favourites of my father (Ruud’s grandfather). 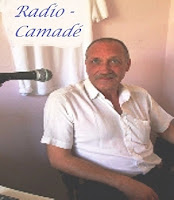 My second long-lost nephew, Ruud, who has his own Radio Station, with his wife Mina 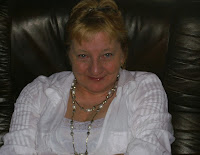 
The story isn't over.  Also in the last few days, I've re-connected with the sister of Walter and Ruud, my niece Frida.  We are now in correspondence, exchanging photographs including ones of her children and grandchildren..  Here is a picture of Frida and her husband John. 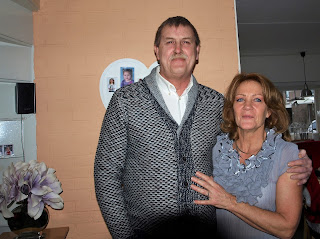 My niece Frida with her husband John

So it’s a global village after all, and the Internet is proving to be way of enabling these reunions to be possible.