"I am extremely pleased with the beauty and depth of the Organiverse Portfolio. It is a ‘Garland of Flowers’ in my daily experience. It is a wormhole entrance into both the depths of the starry night and the inner life process of the biosphere we inhabit. A tour de force that will reverberate down the annals of human cultural history. A unique and magical work of true and lasting significance."  Brian W. Johnson 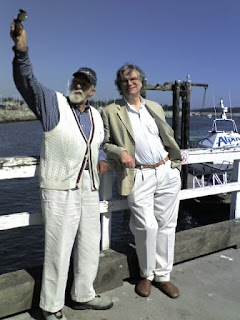 In an artist’s life, once in a while, someone comes along, gives support, and enables a creative project to continue

This post is a tribute to friend Brian W. Johnson, who became a patron of my opus “Organiverse”.

Organiverse is a series of 100 mandalas painted in pointillism that I created in 1972, forty-six years ago, starting in Morocco and completed on the island of Madeira.

The original work is comprised of 25 folio pages, each with four mandalas of 8 cm. in diameter.

While we are occupied with our daily existence, a great mystery takes place: Life, evolving in every form, from micro to the macro cosmos. With this project, we share insights into the enigma called life, embracing art, science and ecology -- a timeless universalism of growth, evolution or genesis. We have the microscope and telescope within, and an unknown destiny.

This work also embraces the interplay and relationship of Colour. It is further a study in organic development. The invisible is made visible, through dots.   We are biologically no more nor less than dots --- atoms. The planets and even the Sun are only a spot in space, depending from where you look.

All life has a beginning, be it the birth of plankton, a whale, lichen, an oak tree, a mouse, and elephant or human being.

All comes out of darkness the womb, the cosmic egg. Beyond darkness and ignorance there awaits Light.   Henri van Bentum, on “Organiverse” 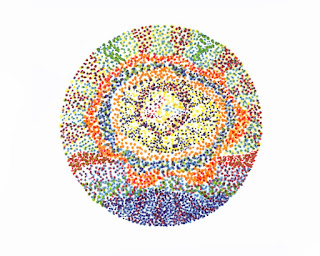 It is now more than a decade since Brian W. Johnson first set eyes upon Organiverse” .

Brian helped to make the work known to a wider audience. His keen interest in Organiverse resulted in our working together on a couple of related new projects.

In 2005, not long after we met, Brian assisted by correcting the electronic scans of the mandalas that had been done by Hewlett Packard. This is a little bit of history to put things in context:

In early 2003, Natasha approached the CEO of Hewlett Packard with a challenge:  can their scanning equipment faithfully reproduce the “Organiverse” paintings, and be true to their original colours? The CEO assigned Allen Rothwell, their colour specialist, to the job.

In late 2002 and early 2003 Allen visited us in Vancouver where we lived at the time. He brought with him their latest scanning machine, and scanned all of the paintings to make digital files. I asked him if he could create a ‘reverse’ edition of the images, which he did.

Thus, a “Starry Night” version of Organiverse was born.

Allen had 25 sets of Organiverse printed in Toronto which were shipped to us a month or two later.  This shipment included 25 of the new “Starry Night” edition.

In September 2006, after seeing these reproductions, Brian stepped forward and purchased several folio containers in which to place the newly arrived reproductions.

However, although Natasha and I were pleased with the contribution by HP, because of the pointillist technique, achieving colour accuracy on the scans was a challenge.  Despite HP’s best efforts, the scans did not reflect 100% the true colours of the original artwork.

What was I to do? I’ve never used a computer and likely never will. Natasha is the cyber-engineer in our family.

But, Brian offered to help, and I gladly accepted his offer.

So, together over several weeks, he calibrated the digital file of each mandala according to my instructions, and the result was a truer rendering of the original colours.

So now we had good quality scans.

It wasn’t long before Brian came up with a great idea – to create what he called hand-held Organiverse “rotation” sets. 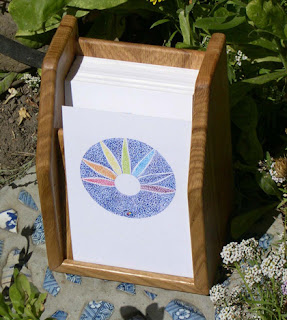 Brian knew it had always been my motivation for the Organiverse mandalas to be used one-by-one, as a ‘kasina’ or device for meditation and contemplation ---enabling people to work with each mandala individually.

His idea was to have prints of the 100 individual mandalas, original size, and place them in a well-crafted wood holder.   This way the viewer could ‘rotate’ each mandala to study individually.

Not just any container, but ones made from recovered wood from Vancouver Island, such as Garry Oak. 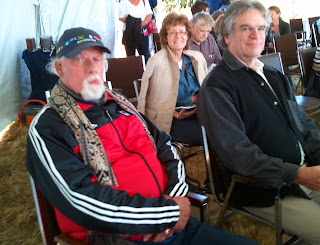 However, since we now had an additional complete series of the “Starry Night” edition electronic files, this meant Brian also printed and produced several handsets of each edition – the original, “Helios”, and the “Starry Night”.  I numbered and signed the back of each one.
Organiverse enters another chapter in its story

Fast forward another year. In 2007 Natasha brought “Organiverse” to the attention of Dr. James Hesser, who at the time was Director of the NRC Dominion Astrophysical Observatory. Jim was heading up a local organizing team for IYA 2009 - UNESCO International Year of Light, and is a member of the Royal Astronomical Society of Canada (RASC).

He and other RASC Victoria members responded positively and were fascinated by the way many images in the “Starry Night” edition evoked images of space.

The organizers appointed their tech expert to create full videos of each edition of Organiverse, and these videos were part of the IYA 2009 celebrations here in Victoria, a focus on an international cornerstone project called “From Earth to the Universe”.

This in turn led to my collaborating with NASA’s Chandra X-Ray Observatory, whose Public Outreach & Education staff created an online exhibit called Coloring Space, juxtaposing a few of my “Starry Night” Organiverse works with images from space. 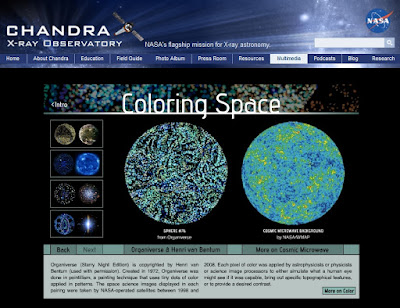 “Coloring Space”, an online exhibit created by NASA's Chandra X-Ray Observatory juxtaposing a selection of my paintings from the "Starry Night"
edition of Organiverse, with images from space

Then a year later, one of the astronomers connected with IYA 2009 who also was taken with the evocative power of Organiverse posted the three videos that had been created for IYA and put them on our Vimeo site.

Screen Capture of 1 of 3 videos on our Vimeo site. This image is
mandala #26 from the set of #100, Organiverse “Starry Night” edition

However, of all these positive developments and various chapters in the life of Organiverse, I am most pleased with Brian’s idea of individual rotation sets, since they come closest to my original motivation and intent in creating the work.  Following this blog post is a commentary written by Brian -- "Some Notes Regarding Kasinas with Reference to the Organiverse Portfolio".

And so the story of Organiverse continues to evolve.  In fact the most recent iteration was Brian’s idea to upload the mandalas onto a digital frame, where an image of each painting appears after ten seconds or so. He did this for both the original edition and the Starry Night edition.

In closing, here is a quote from a medical doctor who has a family practice nearby, in Brentwood Bay:

“Organiverse is a glimpse into the multilayered beauty of all that is Life.
These mandalas offer an immense opportunity for healing
and for a heart-based understanding of who we are physically, emotionally and spiritually.
A dance of colour, form and contemplation.”

Dr. Mark Sherman, MDCM, CCFP
Thought I’d share this history with my readers.   With appreciation to Brian W. Johnson for his awareness of my vision for Organiverse, his patronage, enthusiasm, and friendship.

Note to readers:  on Henri’s blog, in the Search box, enter “Organiverse” and several posts will appear with more history.