Art without signature? "They had no word for Art".

Back in 1967 a small group, twelve of us, visited the Paleolithic caves of Lascaux in France and Altamira in Spain.Both caves were closed at the time we arrived. My French and Spanish helped, along with our being mostly artists from Canada, allowing us access to both primordial art galleries.(Both Lascaux and Altamira have for some time now been closed to the public). So it was a great privilege to see with my own eyes these so-called ‘primitive’ images. Something I’ll never forget. Beyond being awestruck, I was tongue-tied. 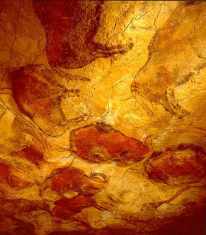 It was like journeying back to The Origins, to our creative roots. These humble rock artists left us a vast legacy.And you know what? Not one of the pre-historic creations by early Homo sapiens shows a “signature”; I’m pretty sure in their vocabulary they did not have a word for Art. [You can see images of human hands, and “dots” too, on those cave walls. Enigmatic symbols. Are those their signatures, left behind for us to ponder?]I often wonder to which ‘school of art and design’ they went to, to learn their skill.

And how can we say these works have been done by ‘primitives? Just look at those lines, shapes and colours, the way they made use of the contours of the cave walls and ceilings to enhance their creations. 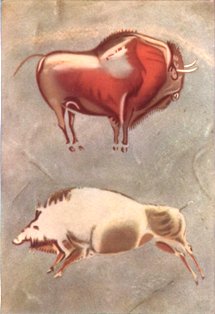 Surely it took not only great certainty on the part of the painter, but they had to be ‘refined’ minds. The grace and precise coordination between hand, head, soul and heart is stunning.
In later travels to other parts of the world, we witnessed other early forms of art, those of ancient Egypt; in Chichen Itza, Uxmal, Palenque and Tulum in Central America; the San/Bushmen rock paintings in Namibia; aboriginal work in Australia; petroglyphs in North America – none of these are “signed”. What a contrast with art today, where some signatures are often so large or dominating it ruins the composition.
But look at snowflakes, flowers, ocean life, animals, all that grows and blooms --- no signatures. Signatures abound in our documents, papers and our works of art.
What is it with us, that everything we create has to be signed? (Sure, in ancient time there were ‘signet’ rings of the Pharaohs, using scarab designs.) Nowadays, signatures and stamps of authenticity are considered a must. If an artist won’t sign a painting, the dealer will insist upon it. Even this blog is identified.
A signature represents ID, as in “I.D.T. – I Did That.”
Yes, signing denotes authenticity, but signing also resembles a territorial marking. “This is mine”, like the spraying by the cat family. Of course it also represents pride, and in some cases vanity, a ‘copyright within a copyright’?
In 1972 I embarked on “Organiverse”, an opus of one hundred mandalas in pointillism, dot by dot, atom by atom. I never signed one of them. My intent was, and still is, to let the images reveal themselves to the viewer. Evolution without words.
In a sense, Art is silent communication. Viewers in their own way need to connect with a work of art, while in turn the full sum of the artist connects with the viewer through their work. Each of us lives a life, with its own experiences, and reacts to the world accordingly.
Vincent van Gogh signed his paintings and drawings simply “Vincent”. We know from letters to his brother Theo that he left out his surname because he realized people would have problems pronouncing it correctly. How right and compassionate he was. Just listen today how his name is mispronounced in a multitude of variations.
Going back to “Organiverse” (the series of 100 images all done in pointillism), this series was created in 1972. In those days printing technology didn’t have the know-how to reproduce the delicate and lucid “colour-play” of the dots. Now, not unlike the cycle of the Cicada that spends many years underground and then emerges “singing”, Organiverse seems to be morphing and re-awakening. (See organiverse.com)
And guess what else is new? Not only are we expected to sign our work, but in the case of Organiverse people ask for explanations of each one! Please, there are 100 of these mandalas.
What’s then left for personal perception and imagination of the individual viewer, if the artist “explains” what should be silent communication.
Imagination for artists is their ‘breath of life’.
See what we mean? We stand upon the shoulders of our noble ancestors, those pre-historic cave painters - - - whose works of the far-distant past have no signature, but lots of intent, spirit and soul. “Sign-ing” off, Henri
Posted by van Bentum

Is Life a Dream, or a Dream Life?

A question from a friendly reader across the pond, in Yorkshire. “I read with interest your blog about the postwar resurgence of ocean liners, and also the movie stars who were aboard. I believe most English movie stars at that time sailed with Cunard or P and O, am I right?” 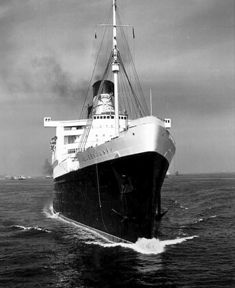 Yes, that’s true. Most British celebrities and movie stars would often sail with Cunard, P and O, or Union Castle Line (which did the route to Africa). Americans and several European stars seemed to prefer the vessel I worked on, Holland America Line’s “Nieuw Amsterdam”, partly because she had air-conditioning, unique in those days.
Some sailed with the renowned Ile de France”. 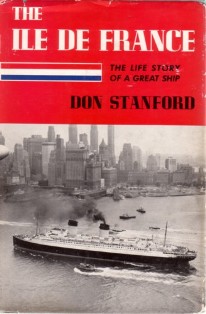 Now we’ve touched once again the subject of post-war Transatlantic crossings by the ocean liners, and re-introduction of 5-star service, let me say a few more words on the topic.
We all have our own life experiences. Except today people are experiencing things “more similarly”, for example, through the saturation of media, we all get showered with the same water. Witness people in subway or buses, all reading the same newspapers. They arrive at work, having formed “opinions” from this “wisdom-source”.
How do we fit in with this assault of confused minds? How do we make sense, or order out of the chaos caused by endless sources of information coming our way (including this blog, ho-ho!) When we travel, we hopefully set out to see and experience different things, but upon our return, do we digest or distill these experiences into seeing things differently?”
During our travels many well-known people, celebrities and members of high society came our way. But several were a bore! Why is this? Smugness? Narcissism? “Blind and deaf” to the world beyond themselves? Who knows, but can be dull.
Often the most interesting people are ‘unsuspecting’ adventurers, humble but proud. When they return home, these individuals see the world differently, with ‘fresher eyes’ than when they left home. These are the same kinds of people who often end up “leaving this world a little bit better than they found it” as the Circumnavigator’s Club motto says.
What makes my own life so diverse is that it all seems to fall into place, in a sense ‘predestined’. Maybe all our lives are, who knows? And it’s not always smelling the roses, but feeling the thorns once in awhile. Plenty of slips on the banana peel of Life. In my early boyhood in the Lowlands, we learned a song, called “Wij Reizen Om te Leren”.

“Wij reizen om te leren,
Door heel het land,
En hebben als wij wederkeren
Ook meer verstand.”
“We travel because we wish to learn.
Then, upon return, we will have gathered more insight and knowledge.”
(An aside, yours truly learned five languages because of all my travels, and ‘being there’.) Returning to the title of today’s post and the subject of dreams and reality:
One blistery Toronto winter morning in 1973, I woke up with a clear dream of teaching Art on ships, later that dream became reality. (Caused indirectly by a rejection I’d received for a grant application.) There is a great difference between making a dream reality, (remember Danny Kaye in “The Secret Life of Walter Mitty?”), daydreaming or “self-talk”, where nothing happens. Alot of "baaaaaaaa", but no wool! If an around-the-world sailing is the ‘crown jewel of travel’, then to make a dream-come-true must be a ‘crown-jewel of life’s journey’. Happy trails, Henri
Posted by van Bentum