Part Two: the Huichol "Peyoteros" of Mexico (see below for Part One) 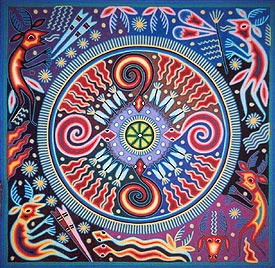 [Huichol is pronounced “Wee-chole”.] These humble but proud people live today in a culture of transition. Meaning, our high impact, high-stress culture and a silver mine development is having a major effect on the Huichol. In some areas of their territory, small groups are holding onto their traditions.  Others, more vulnerable, have already succumbed to ‘progress’. 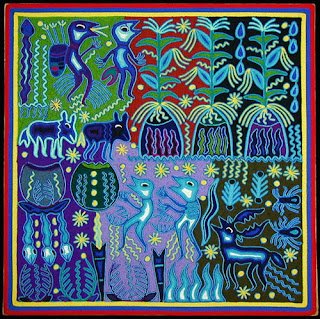 At one time not long ago, the Huichol embodied a beautiful way of life that was protected by their relative isolation and a strong lack of desire to mix with the Spanish, Mexicans or, until recently, North Americans and Europeans.  They avoided contact, even if it meant having to leave their usual places and hide in unknown territory. You could say the Huichol have been invaded by contemporary conquistadores, all the more ironic since they were amongst the very few who eluded the original conquistadores centuries ago. 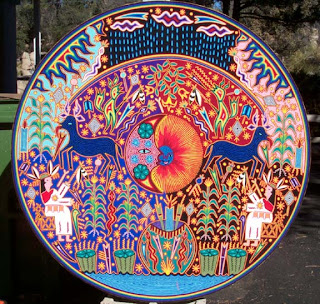 Today there are not many pre-Columbian living cultures intact for all to see, as that of the Huichol Indians. It’s no surprise they are on the brink of losing what was and is so dear to them. Especially now with a mining project threatening their sacred, ceremonial lands. Click here to visit “Salvemos Wirikuta” (“Save Wirikuta). Because of this situation, once again the Human Family on this planet is about to lose an invaluable link to our ancient collective past. The Huichol people are one of few ancient cultures maintaining their tradition for centuries up until the present time. Their way of life is rich with symbolism and mythology.  They revere everything in Nature.

"Kauyumari Comes Home", by Jose Benitez Sanchez
The Huichol have been called a ‘culture of doctors’, for no less than one-third of the men are shaman / healers.  For us that would mean out of 100 people, 33 would be doctors. Each year they go on pilgrimage to the land of the Peyote cacti, “Wirikuta”.  They walk over 350 kilometers in twenty days to San Luis Potosi, where the magic peyote is taken in a ceremony under the guidance of the Shaman. This annual pilgrimage keeps their legends and myths alive. There is also an annual pilgrimage to Lake Chapala, where the shaman tell the story of “The Tree That Rains”.  They keep this Flood Myth (like so many cultures have, such as Noah’s Ark), alive. 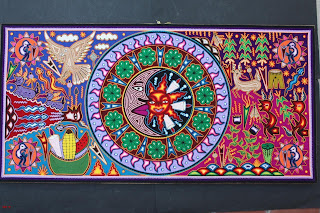 It’s through their yarn paintings and intricate beadwork the Huichol tell their stories best.  This highly symbolic form of expression reflects their religious beliefs and vivid connection with Nature. Some of these yarn paintings seem to ‘flow’ like real paint.  The coloured strands of yarn are painstakingly pressed onto beeswax-covered plywood, transforming cotton or wool to a never-never land. One of the Huichol masters of yarn painting was Jose Benitez Sanchez. A dignified and proud Shaman, (the Huichol had no word for “art” or “artist”), he went ‘over the horizon’ four years ago. 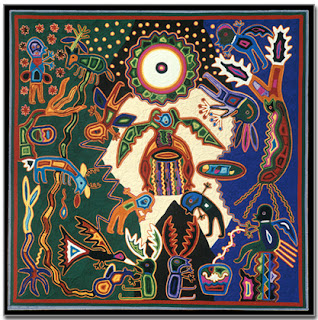 Standing in front of one of these works by Jose Benitez Sanchez, realizing human fingers have gently pushed these strands of yarn into the beeswax-covered plywood, is an awesome revelation. The strands are applied so closely together, there is no space between them. From a distance the works look like a ‘painted’ painting.  It puts shivers down my spine. It was an honour for me to have met Juan Benitez Sanchez long before he became famous. Someone must have recognized the quality of these yarn paintings, because they can now be seen in museums all over the world. Click here for more information about Juan Benitez Sanchez and works by other Huichol masters to see examples of their work.