Did anyone notice the Spanish fan in Madrid dressed like an octopus? Also some people were wearing T-shirts with an octopus design.  All thanks to the amazing Paul who resides in an aquarium at Oberhausen, Germany.  See my posts below for more details about his exceptional record of predicting the match outcomes.  Paul predicted Spain’s victory over the Netherlands. 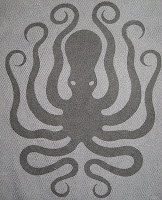 And now there is a big demand worldwide for squid or calamari, pulpo, at the fish markets world-wide!  Unfortunately, since this won’t do much to help this species.  People have a strange mindset, now thinking eating octopus will help give them psychic powers. (Like in Asia where so many species are at risk or virtually extinct because of a strange mindset about aphrodisiac powers of various animal parts.)
We have our own "Paul" as you can see beside this post. Got it a few years ago on the island of Domenica, calligraphy courtesy of Natasha.
Posted by van Bentum