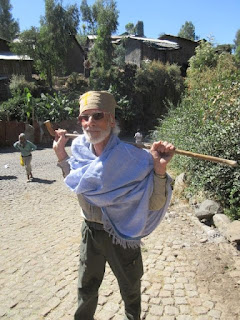 Our former neighbour, Raymond Doucette, during his lengthy stay in Lalibela
Here is a message from our friend and former neighbour back in the days when we lived in Vancouver.  Raymond is a humble but intrepid traveller and wanderer. Henri and Raymond had a regular correspondence from afar.  Henri and I were always fascinated by Raymond's accounts of his travels, in particular the lengthy time he spent in Lalibela, Ethiopia, where he assisted in the creation and funding of a job-creating Lodge for local people.  Natasha

"My solitary bachelor life ended in 1996, after the new neighbours, Henri and Natasha van Bentum, moved in across the hall.

They explained they were just house-sitting for six months – actually, they described it as “fish-sitting” -- since one of their main tasks was to look after a huge aquarium that occupied about one fifth of the living room space.

They were a bohemian, friendly pair. The six month fish-sitting assignment ended up lasting five years, since the owners decided not to return (they'd moved to northern BC, and rented the apartment to the van Bentum’s).

Before long, the three of us visited each other regularly, with Henri and Natasha always inviting me to their place for supper;  it was larger than my bachelor studio.

Their place was full of Guatemalan, Indonesian and Indian textiles, plus of course Henri’s paintings, and artefacts from their global wanderings.

I discovered Henri’s cooking was just one of his talents. And which I avidly anticipated.

Before meeting the van Bentum's, I’d never heard a single sea-going yarn. Nor knew anyone like Henri. Or his repartée. And I was soon hooked, intent on experiencing his lively European humour.

And his earnest, and vivid accounts of their travels, adventures, and fascinating sojourns.

The three of us had similar travel bents – appreciating above all, out of the way, unspoilt places. Which was possible in those days.

My memories are also of Henri's profound discipline, his careful, and steadfast fastidiousness --- yet free.  As was his art, his integrity.

I came over to Victoria in August 2020 for his 90th birthday and brought him a portable solar light from Ethiopia. He was thrilled and showed everyone, saying “Imagine, the light gathered here comes all the way from Lalibela!”

Henri took me under his wing. And as an equal. For which I am totally grateful.

I have appreciated the support, and attention he generously provided. And particularly for a time when I most needed it. I've wished I had let him know.

~~~
Postscript:  For those who don’t know it, Henri’s blog is an endless source of fascination. It’s still there on the Internet, and will remain as part of his legacy.