From Le Tour at Corsica where Napoleon Bonaparte was born to St. Helena, where he died


We were watching the recent three-day spin of the Tour de France stage around the beautiful, at times rugged island of Corsica, where Napoleon Bonaparte was born in Ajaccio. With all our travels, we have never been to Corsica. 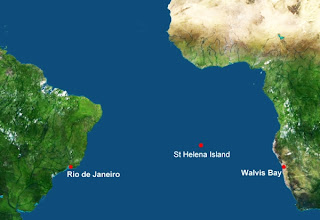 This opened doors of our memory bank from a visit 11 years ago to the historic island of St. Helena in the South Atlantic, where Napoleon was exiled in 1815 and died six years later. St. Helena, only 10 kms by 17 kms and a British Overseas Territory, is only accessible by sea with just one regular vessel serving the island, RMS St. Helena.  It is one of the most remote places in the world. It is so remote that even pirates never found it. Most of the present inhabitants are descendents from slaves or Boers (over 5,000 prisoners were transferred to the island by the British in 1902 during the Boer War). Because of the harsh, volcanic landscape, there is no airport on the island.  (That will soon change, see below.) For our visit, we were aboard the “Marco Polo”, an ocean liner sailing from Cape Town, South Africa to Rio de Janeiro, Brazil. 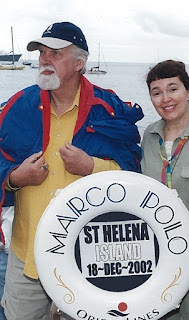 I was guest art teacher and lecturer. All the passengers had been forewarned of the powerful swell surrounding St. Helena and its frequent mists.  And we were told it may not be possible to get ashore.  In fact the week before our visit, the venerable (now retired) QE2 was unable to land any passengers. It took five days to sail from Cape Town to St. Helena via Walvis Bay.  When the ship approached Jamestown, the main town and only harbour, we observed dramatic red lava cliffs, some 200m high. There is no deep water harbour so ships have to anchor, with passengers taking tenders to the only dock.   Even in good conditions, the swell crashes into the dock and there is a risk of damage to the tenders. We were lucky. Weather and ocean conditions made it possible to get ashore. 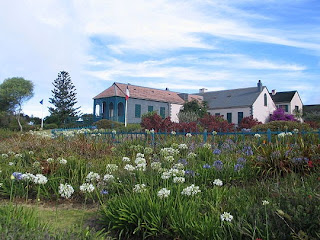 Longwood House, where Napoleon lived in exile for 6 years
We walked along Deadwood Plain some distance towards Longwood House, formerly a barn built in 1752 that was made into a summer house for the Lieutenant Governor, then converted to accommodate Napoleon. The first thing you notice is the tall flag post flying the tricolored French flag waving in the wind. 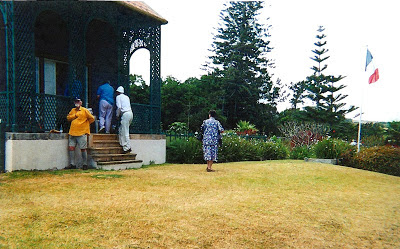 Henri posing "Napoleon style", Longwood House
Although St. Helena is a British Overseas Territory, 14 hectares of land are declared French domains and include Longwood House, a small pavilion, and the “Valley of the Tomb” where Napoleon was buried. 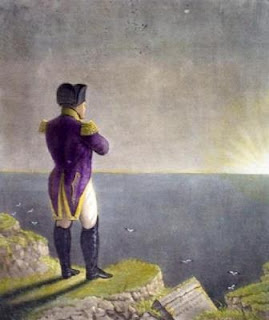 In 1840, 19 years after his death, his body was exhumed and returned to France and buried at Les Invalides in Paris. The restoration of Longwood’s interior was recreated exactly the way it was when Napoleon died, campaign bed and all.  Only the outside needs to be repainted every year because the wood is exposed to wind, rain and mist. At present there are plans to build an airport by 2016, thus making it possible for visitors to reach this tiny and remote island, with its weighty history.