Something we seldom see here at the sea walk - - - someone sketching. She was a passenger from a cruise ship, or so I guessed. Beside her was a Holland America bag and a Holland America ship was docked nearby. I went over to take a look, her subject was the Olympic mountain range across Juan de Fuca Strait. From personal experience, I know that most outdoor or ‘plein air’ artists wish to be left alone, not disturbed or distracted. So, I quietly observed, saying not a word.
Seeing her sketching lit up my "memory-chamber", transporting me back in time to the spring and summer of 1959 in Banff, Alberta and the Rockies. There, I’d been doing lots of field painting on-the-spot, “en plein air”, like the Impressionists and Group of Seven.

My trip out west began when a doctor specialist in Toronto encouraged and sponsored me to spend some time in the Canadian Rockies, this after having been less than two years in Canada. Early May 1959, I boarded the CPR train from Toronto to Banff. An adventurous and memorable journey in itself, at any time.
It was hailing when I got off the train in Banff. I found a place to stay and settled in to 206 Otter Street (now called “Parkin House” and a heritage building). Next day I was eager to scout the region. A light snow was falling, dusting the streets white. Mount Rundle and Tunnel Mountain received an extra pack of winter’s last visit.
Mrs. Parkin lent me ear muffs and gloves. I’d brought along a small wooden easel, paint box and minimal supplies. The first few paintings were snowscapes.
Within a week the weather was milder, the snow quickly melted. Every day I went out, like the French Impressionists, selected a location and finished a painting on the spot. Sometimes in oil, sometimes oil pastel. By the end of May I’d rendered several paintings within walking distance of town, up Tunnel Mountain, over to Vermillion Lake.
When morning light started earlier, my landlady suggested I get up to Lake Louise. All very well, but I had no car or bicycle. Then one day on a morning walk, looking for a spot, a station wagon stopped. “Need a lift?” I replied, “Where to?” “ We’re going trout fishing, we can drop you wherever you like, for an artist there’s lots to paint in the Park, you know.” Thus began another chapter.
In those days there was little tourism, every morning I’d hitchhike and would always get a lift early in the morning, most often with early-rising fishermen.This opened the way to Peyto Lake, 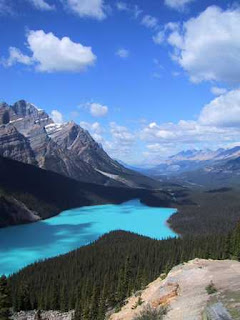 Lake Louise, Emerald Lake, Takakkawa Falls, White Fish Lake and Moraine Lake. Getting lifts in the morning was easy, but not always so later in the day. Often I had to wait quite awhile to get back home to Banff.
Many times in appreciation to a driver for the lift, I would give them the painting or pastel I’d just painted (much to their surprise). Unfortunately we have no record of where these early works are now. Thus began a journey, not only changing my life, but also my career. Should you still have time or be interested (what with all the goings-on, such as elections and the economy), then I’ll gladly continue to share the next ‘installment’ of Banff 1959 in a post to follow. Having had many unusual encounters with wildlife, and was often alone in the wilderness . . but that's for next post.
Posted by van Bentum