Tell Your Own Story, say the San People (Bushmen) 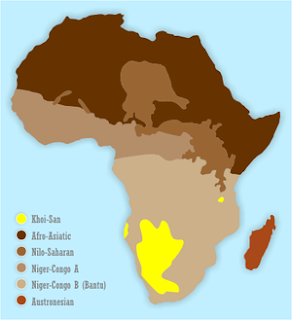 Map showing distribution of Khoi-San languages, unique for their "click consonants" and perhaps among the most ancient of human languages
Everything has a beginning.  Pre Big Bang.  Big Bang.  Life itself.  Likewise in storytelling.  We all like stories – fables, anecdotes, fairytales, travel tales.  Sometimes I write them too (children’s stories, or Apologues). When we were in Namibia, our guide talked about how the San people were great storytellers.  Especially the Elders, who with fervor and sometimes in dance, described encounters with wild creatures, including predators and scavengers such as lions and hyenas. Or about their gods, such as tiny but powerful Mantis. 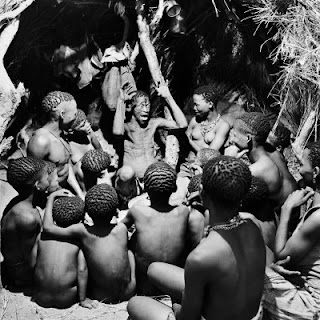 Here is an old photo from what must be one of the most iconic on the subject of San storytelling. The elder has his audience spellbound and in awe of his tales. The interesting thing, amongst many other things, about the San is their insight into the importance of telling stories, even in the way you lead your life. 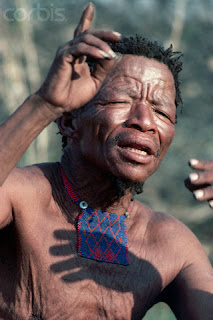 They would say, “What is your story? Unless you tell your own story, you will not be happy.”   How is that for a blueprint of psychology?  Sadly, the San people are now endangered.  Some of you may remember them in the film “The Gods Must Be Crazy”. In the past, they set down their mythologies on rock, in caves, now called petroglyphs and pictograms. 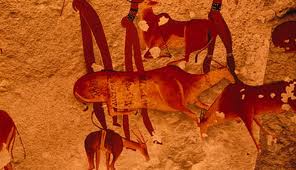 From Ukhahlamba - Drakensberg Park, declared a UNESCO World Heritage site in 2000
The most famous is the Tsodilo panel named after Laurens van der Post, now a World Heritage Site. We’re told their language has no word for “artist”, but these works are  evergreen. 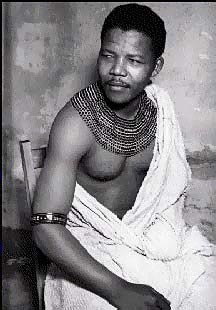 Nelson Mandela as a young man in Xhosa tribal dress. On his maternal side, Mandela has partly Khoisan ancestry
We understand Nelson Mandela is of Thembu (paternal) as well as Xhosa and Khoisan (maternal) ancestry.   So although not 100% Khoisan, his features tell us he is related to these ancient peoples. (Short, curly hair, small ears, “copper” coloured, and a gentle smile.)  Not only that, but his life is telling us the biggest story of a brave, dignified, heroic and noble life lived.  A stellar leader - such a rarity today. Now that this living legend is seeing the light of the horizon coming closer and before he "goes over that horizon", we look at the amazing story he tells the Human Family. 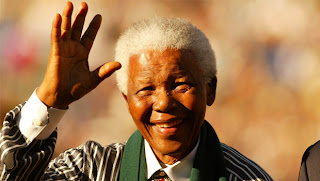 The origin of the Khoi-San people is not known, but we do know they are genetically the world’s oldest people, with genetic markers that no other humans have. It's said they go back as far as 150,000 years.

Thought we’d tell you this story.