Here In Victoria at the Inner Harbour many First Nations people have their artwork on display, along with other vendors. Amongst these we noticed a distinctive Folk Art painting from Haiti. 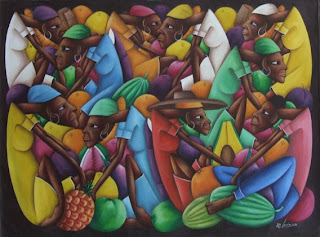 Made me travel back in time to an experience locked up in my memory cells waiting to be revisited and released.  My eighty-fourth orbit around the “Leo” Sun is coming up and this reminded me of our visit to Haiti many years ago and my first meeting with a “Fortune Teller”. We were aboard a ship going around the world (Royal Viking Line’s “Royal Viking Sky”) back in 1974. I was guest artist and lecturer. 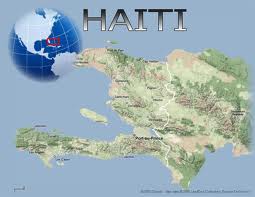 One of the many ports-of-call was Port-au-Prince. We had volunteered to serve as minders for a shore excursion, organized in those days, by American Express. One of these was advertised as a Vodou Ceremony.  The description said “Not for the faint of heart”. There were 15 of us on the tour. We arrived at the destination after a drive through rugged, mountainous countryside and passing some small villages. 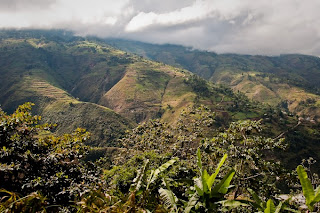 We were met by a local interpreter, who told us the ceremony would not be “staged”, but the real thing, which our driver had already mentioned. Three chickens were sacrificed. Whirling and high-pitched chanting brought on a trance state.
A few of the ship’s passengers were feeling uneasy. Indeed it was not something for the faint of heart. The ceremony was eerie and mesmerizing.  Then the guide announced  the priestess had offered to tell anyone their future if they were interested. However, she only spoke Patois and French. No one spoke French apart from us, so I agreed to have my ‘fortune’ told.  Thus I found myself alone with the Vodou Priestess. 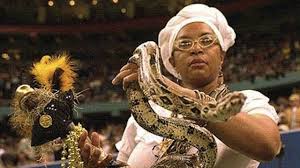 She predicted I would reach the age of 80, holding my hands with her leathery, wrinkled hands – looking me straight in the eye and repeating it twice, “Quatre-vingt ans, quatre-vingt ans.”   Almost forty years later, and approaching my eighty-fourth birthday, she was at least correct in saying I’d reach 80.  The additional years are a bonus. Following the ceremony, we started to walk towards the van parked a distance away. Suddenly we were greeted by a major thunder and lightning storm.  Thick raindrops came pelting down. 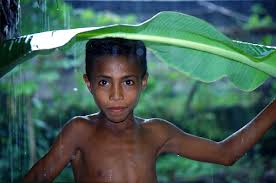 
The locals rushed to give us each a huge banana leaf to hold over our heads.  These makeshift Haiti-style umbrellas really did the trick. We must have looked a funny sight, walking in line through the mud with the enormous banana leaves on our heads. The rain, thunder and lightning “sobered” everyone up quickly after the intensity of the ceremony, an experience that seemed “unreal”, to the reality of elemental fury and a deluge. Needless to say, those who were on this particular excursion had lots to talk about with their fellow passengers back aboard ship.  Just like us, with this blog post, sharing this unforgettable experience in Haiti after all these years.