Hualtulco, Mexico (April 25)  29oC.  Not long ago, Hualtulco was a sleepy fishing village. 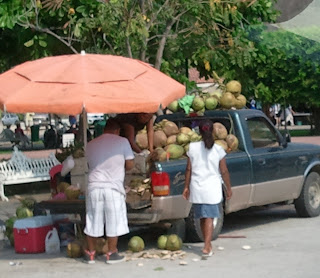 Locals Can Buy Coconut To Quench Their Thirst
Now transformed into a major tourist resort.  Hualtulco was “created”, like Cancun, by FONATUR -  the Mexican government tourist agency.  The agency’s computers determined it to be a good spot, then they flew over the region, mapping out its design.  According to the local guides, this enterprise seems to have paid off. From late autumn through winter and spring, it’s packed.

Relaxing in garden restaurant, Hualtulco
80% of its tourism is domestic because of limited air access. There are 9 bays and many small coves stretching over 26 kms of coast.  Dozens of beaches, with one just 5 minutes from the ship.
Manzanillo next.   The movie “10” was filmed here. 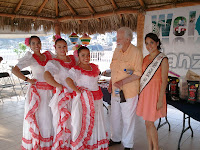 With local beauties at pier
It’s still a laid-back place, surprisingly, compared to Puerto Vallarta which also came alive after a movie was filmed on location (“The Night of the Iguana”  of Richard Burton, Elizabeth Taylor and Ava Gardner fame.) 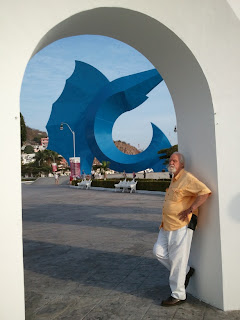 With the mega Swordfish sculpture
The centre of town is dominated by a huge, blue sculpture of a swordfish, adopted as the symbol of Manzanillo which calls itself the “swordfish fishing capital of the world”.)  But this industry puts them under threat. One day this sculpture might be our sole memory.
Puerto Vallarta - we know PV very well, having spent about a dozen winters there. The day of our arrival a major Triathlon was in full gear.  So we stayed around the pier and visited the nearby parrot rescue station. 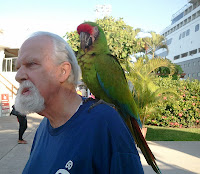 "Sorry, I don't have a cracker"
Great fun.  They make a racket.  A fellow aboard ship told us he used to work at an animal rescue centre where there were macaws and parrots.  One of the parrots learned to mimic the sound of a neighbouring dog that happened to be a Rottweiler.  As he did his chores, sometimes he would hear growling, but was never sure whether it was the parrot, or the dog! He said it was a bit unnerving. 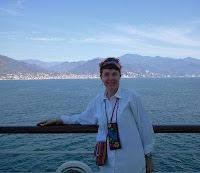 Natasha aboard ship  Bahia de Banderas in background, Puerto Vallarta
In San Diego a group of birdwatchers embark on the ship. The next 3 days they were on deck all the time, morning to night.  With very expensive camera and telephoto lens equipment.

Passionate Birdwatchers
However Natasha was the only one who spotted the black-footed albatross, just with her eyes. Coming up the coast of California and Oregon, we had stormy weather with a Beaufort 9 reading one afternoon. Boiling seas, perfect for the "storm bird". 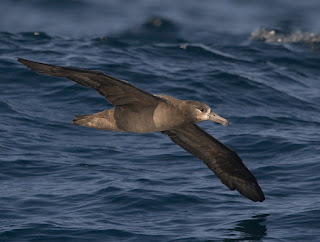 Albatross enjoying the 'breeze' on its endless journey
Overall we noticed once again how sea life is becomes less and less visible.  The odd family of dolphins, a whale here and there, flying fish (especially in the Caribbean). I spotted a large sea turtle paddling away all by itself close to the ship, and a couple of swordfish. May 4 we arrived in Victoria, BC.  Our home port. And for the first time we disembarked right at our doorstep.  A great way to come home.